Thomas Buergenthal: More Than a Survivor

Throughout his 85 years, Thomas Buergenthal has experienced justice from all angles. He has been deprived of it, reclaimed it, fought for it for others and worked to strengthen it worldwide. He is one of the youngest survivors of the Auschwitz camp, freed at age 11. Even now, Buergenthal has yet to give up hope for a just world, and he continues to make strides toward one through his work in the field of international law, detailed in the new documentary Peace through Justice: Past, Present, and Future. “I seem to have been born with an optimism that my father had,” Buergenthal says during an interview at his home office in Washington, DC. “I think cynicism makes you inactive.”

Buergenthal has been anything but inactive since his liberation, becoming a lawyer, professor, judge and author. Throughout the concentration camps, the harrowing death marches, and his separation from his family, Buergenthal says that he never lost the belief that he would live to see a future beyond that suffering. “I always believed I was going to survive, because I fought Hitler,” he says. “This was my own private battle, in the death march, and all those things. I wouldn’t let him kill me.”

Buergenthal, who was born in then-Czechoslovakia, arrived in Auschwitz in 1944, after surviving two ghettos and a labor camp. He was later liberated from the Sachsenhausen camp in 1944. Two years later, he was reunited with his mother in Germany—his father, he later learned, had been killed in a separate camp. He was then sent to the U.S. to live with his uncle, where he attended high school in New Jersey. After college in West Virginia, he went to New York University Law School and Harvard Law School to specialize in the nascent field of international law.

Practicing international and human rights law was the only way Buergenthal believed he could make the most of his renewed life. “I knew what it felt like to have one’s rights violated, to be maltreated. And so there was really nothing else that would be of interest,” he says. This commitment took him, in 1979, to the to the Inter-American Court of Human Rights, where he focused on Latin American issues as a judge and then president. In 2000, he became a judge on the International Court of Justice in the Hague, the judicial arm of the United Nations. He resigned in 2010, and now teaches law at George Washington University Law School. “I resigned because our grandchildren didn’t know who we were,” he laughs. 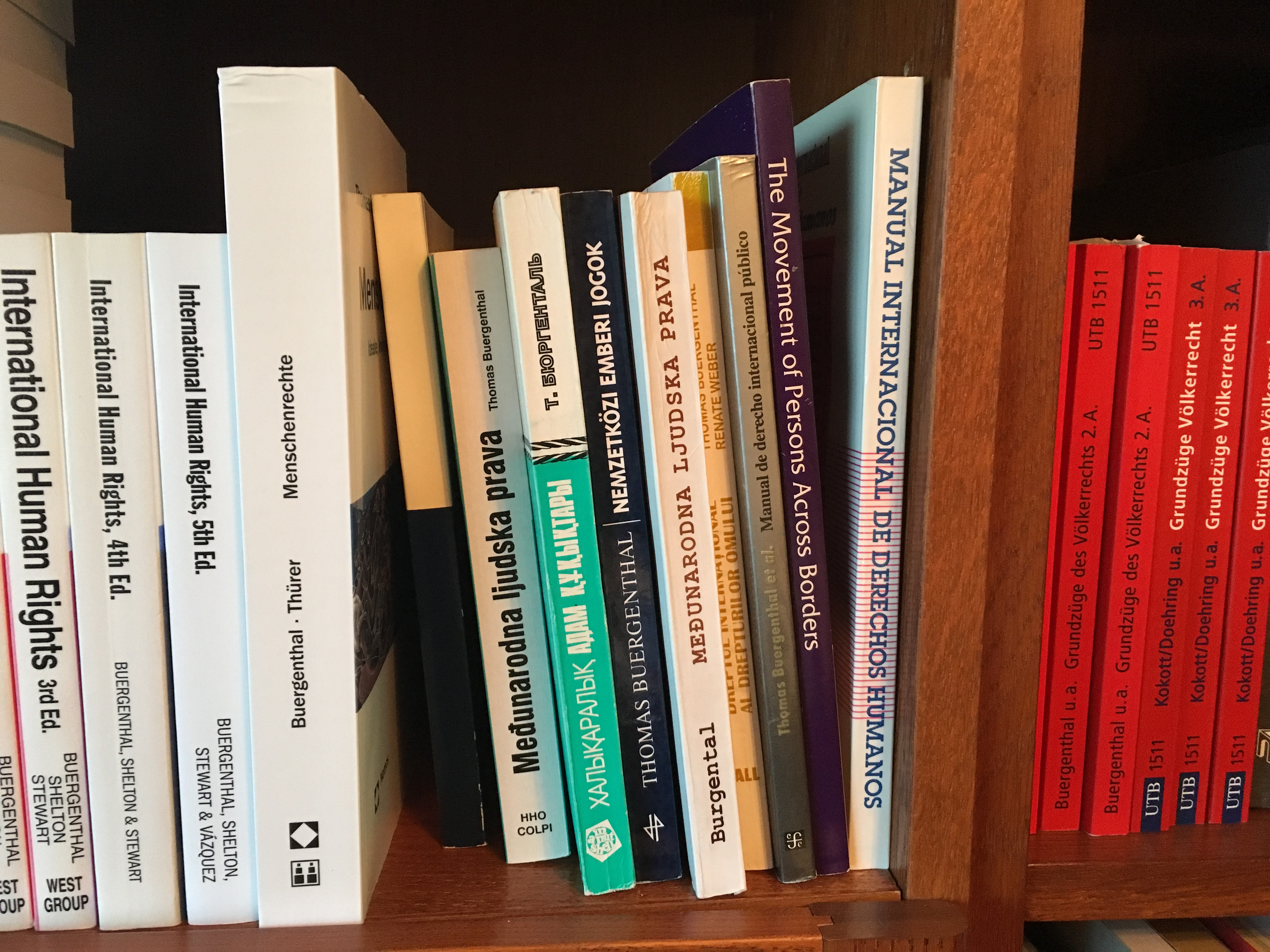 Some of Buergenthal’s authored legal works in their many translations.

Beyond inspiring him to pursue the field of international law, Buergenthal’s Holocaust experiences influenced his work as a judge. While a judge on the Inter-American Court of Human Rights, he participated in the decision to order the Honduran government to pay compensation to the families of individuals who had “disappeared” through illegal government actions. Additionally, while at the International Court of Justice, a case was brought against French Holocaust denier Robert Faurisson. Buergenthal recused himself, citing the deaths of his family members and his suffering in the camps. “I think it made more of an impact than if I’d written [the verdict],” he says.

Although one might expect Buergenthal to tire of working with human rights abuses after facing so many of his own, Buergenthal does not feel this way. “It’s a certain sense of pride,” he says. “Hitler failed to do what he wanted to do. He killed about a million and a half Jewish children, and some of us survived, so I’m very proud of that fact.” Buergenthal identifies as Jewish, though he was never very observant. “We were very much an assimilated family,” he recalls. “We are very proud Jews to this day, and I think brought up in Jewish ethical traditions…I know the theology to some extent, but I’m not interested in it.” Even though he is not observant, Buergenthal’s values and ethics are indisputably interwoven with Judaism. “To be a Jew is not be afraid to say that you are a Jew,” he says.

Buergenthal maintains this fearlessness, even more than 70 years after the Holocaust. Though human rights violations continue around the world, Buergenthal asserts that the legal fight for justice is active in invisible ways. While the Nuremberg trials were a retroactive response to the Holocaust, human rights abuses now have more of a proactive prevention. “If a Hitler came around today, he would have to think, ‘What obstacles am I going to encounter in creating another Holocaust?’ And to that extent, the existence of courts and treaties and various international organizations provide an obstacle,” he says.

Beyond these legal structures, Buergenthal argues that Jews now have a heightened awareness of anti-Semitism that wasn’t present before the Holocaust. “Jews are much more conscious today of anti-Semitism and fighting anti-Semitism than they were at the time,” Buergenthal says, noting that American Jews were largely inactive in aiding Jews during Hitler’s reign. Despite this newfound mindfulness, Buergenthal believes the memory of the Holocaust will slowly begin to lose some of its impact. “Over time, it will be there as a concept, as a piece of history,” he says. “Even now, people talk about the Holocaust, but don’t really know what it was anymore.”

Though he is not now involved in politics, Buergenthal still has a strong commitment to advocate for human rights. “Everything that human beings need to live happy lives goes into human rights,” he says. “If you start taking those rights away—whether you charge so much money for medication that people can’t afford it—that is a violation of human rights, in many ways. A state that permits this when it has the opportunity to prevent it is complicit.”

Buergenthal believes that the United States, under the current administration, fails to meet these standards. He is particularly critical of the treatment of immigrants at the southern border. “In all the years that I’ve been here, from Truman until now, I never thought this would be possible,” he says. Buergenthal says that the immigration crisis is especially resonant for him: During Hitler’s rise to power, his grandparents applied and were rejected for U.S. visas. “It’s something I didn’t expect to ever see happen in the U.S.,” he says.

Despite present-day atrocities, as well as those that Buergenthal experienced, his belief in the bend toward justice is unwavering. “I look back, and I’ve lived a very good life, despite all the terrible things that have happened,” he says. His most powerful memory, he says, is his reunion with his mother after they were separated. His mother located him in an orphanage in Poland in 1946, sending him a letter before they were able to meet. “What would it mean to you if you were separated from your mother and thought that she was killed, your father was killed, and then you get a letter,” he says, leaning back. “And then you’re smuggled out of Poland, to Czechoslovakia, to the American zone in Germany, and to the British zone in Germany, and there is your mother?”