The Year Israel Qualified for the World Cup

Once every four years, people across the globe turn their eyes and TV sets to the largest sports tournament in the world: the FIFA World Cup. This summer, 32 national teams will be competing across Russia for the chance to become champions of the world’s most popular game. Neither the United States nor Israel will be there this time around. But while missing the World Cup is viewed as a failure for the U.S. Men’s National Team, qualification is a rare occurrence for their Israeli counterparts. How rare? The Israeli national team has qualified for the tournament only once—the 1970 games held in Mexico. For the singularity and suddenness of the event, the story of that team has passed into Israeli folklore, its achievements left unmatched and its players held up as timeless heroes.

“At that time, our country wasn’t all glamorous and well known as it is today. No successful high tech industry, inundated with battles and wars,” wrote Giora Shpigel, one of the stars of that famous team, in a special column published in Israel Hayom on the occasion of Israel’s 70th birthday earlier this year. “And there, we, the Israeli national team, made the World Cup for the first time.” 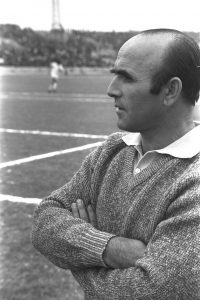 The Israeli national team had been participating in World Cup qualifiers since as early as 1938, under the British Mandate, but to no avail. The national team did qualify for the 1968 Olympics, but World Cup success remained elusive. Following the Olympics, Emmanuel Scheffer, a respected coach in the local Israeli league, was picked as the new head coach of the national team. A large part of his duty was to choose the players for the squad slated to compete in the upcoming 1970 World Cup qualifiers, and, if successful, in the tournament itself. He chose to build a squad of hard workers around two of the country’s biggest stars: Giora Shpigel and Mordechai “Mota’le” Shpigler. In the years leading up to the tournament, Shpigler had finished as the league’s top scorer three years in a row, while Shpigel helped his team, Maccabi Tel Aviv, to two consecutive championships.

The squad did lack international experience, as they all played in the local league. But that also meant that they knew each other well, whether by playing with or against one another. Out of the total 19 players on the squad, nine had played in Tel Aviv’s top teams, Maccabi and Hapoel. Two other players instrumental to the team, Yitzhak Visoker and Shmuel Rosenthal, played for nearby Hapoel Petah Tikva. Together with the infamously strict Scheffer, this group made for a cohesive unit. “He [Scheffer] knew how to take the best out of us for the good of the national team,” Shpigler told Channel 10 News earlier this year. “Whoever didn’t know how to connect to his perception, his demands, just wasn’t there.”

Road to the World Cup

The road to the Mundial, as it is often called, was not an easy one. At that time, the final stage of the tournament only consisted of 16 teams—half as many as today. Each team vying for a spot in the final tournament would have had to qualify through three rounds of games against rival national teams from the same region.

The first round of qualifiers offered Israel a bit of luck; opponent North Korea had refused to play the team, handing it an automatic qualification. There, Israel served New Zealand with a 6:0 aggregate score in two games, led by stars Shpigel, Shpigler and striker Shia Feigenboim.

In the third and final qualifiers round, Israel was slated to play Australia. The first leg took place on December 4, 1969 at the national stadium in Ramat Gan. The 40,000 fans in attendance saw Shpigler convert a free kick to give Israel a narrow 1-0 win. Ten days later during the second leg in Sydney, it was Shpigler who scored again. With a final score of 1-1 in that game, and a 2-1 aggregate over Australia, Israel was World Cup bound for the first time ever.

Following a tie in Ramat Gan, Israel played Australia in Sydney for the last ticket to the 1970 World Cup. Shpigler’s goal in that game secured Israel’s first ever trip to the tournament.

Yet any luck that might have sided with Israel during the qualifiers ended there. In the traditional group stage lottery, where a draw decides which teams will face one another in the first stage, Israel was put into that year’s “group of death”—the toughest of the tournament. Aside from Israel, Group B included two former World Cup winners in Italy and Uruguay, as well as a strong Swedish side that hosted the 1958 tournament. Not quite the first timers.

This April, Yediot Aharonot brought the players from that monumental team back together for a visit to President Reuven Rivlin’s residence in celebration of Israel’s 70th anniversary. Rivlin, who held a position in Israel’s Football Association at the time, was one of the lucky few Israelis in attendance to watch the team play in Mexico.

Feigenboim, one of the team’s stars, took the opportunity to remember the feeling in the Israeli camp after the results of the drawing. “Every World Cup, I read about a group of death. Ours wasn’t a group of death, it was a group of hell, a disaster of a drawing,” he said. “I remember that the newspapers were afraid we were going to demean ourselves with defeats. Two monster teams and one that hosted the World Cup in 1958. Some even said that with this drawing it’s better not to show up.” 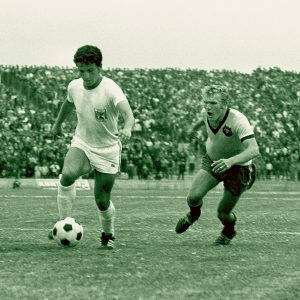 As expected, Israel’s first World Cup bout ended in demise. The Uruguayans proved to be the stronger side, handing Israel a deft 2-0 defeat. Yet both the team and the audience knew that this was just the beginning.“I was listening to the Italian commentators who were saying Israel is playing like a well trained army unit,” Rivlin recalled. “After all, the entire world was looking at us after the Six-Day War. Israel became a winning country then, and everybody wanted to understand whether that will happen in football as well.”

The second match was critical for both Israel and the opposing Sweden. The Swedes also lost their first match, and needed the win if they had any aspirations to qualify to the next round. The match was an even contest until Tom Turesson, Sweden’s international forward, gave his team the 1-0 advantage in the 53rd minute. Only three minutes had passed, and then it happened—Israel’s only goal in the World Cup to date.

And who but Shpigler, undisputed star and scorer of the qualifying goal against Australia, to the rescue? Following a team play, Shpigler released a powerful kick from outside of the box that only stopped in the back of the net. That goal set the final score of the game, 1-1. It was the first ever World Cup goal in Israel’s history, and the first points collected.

Israel’s match against Sweden in Toluca, Mexico. Shpigler’s goal in the match—the only one scored by Israel in the World Cup to date—also earned the team its first ever points in the tournament.

In the final match, the Israelis held their own against an Italian team that featured some of the time’s biggest stars, such as renowned forwards Gigi Riva and Sandro Mazzola, earning a 0-0 tie. The tournament’s final results stood to show how tough Israel’s competition had been. Uruguay finished fourth overall, while Italy was only stopped in the finals by Pele’s legendary Brazil side.

The team finished the 1970 Mexico World Cup with two points, one goal and a hope that their achievement would be replicated by future generations.

One Time, and One Time Only

“Our performance in the World Cup gave soccer a huge boost in Israel. The stadiums were packed,” wrote star goalkeeper Yitzhak Visoker in a special column for Haaretz about that legendary team. “The crowds loved soccer beforehand, but once you had players and stars that played in the World Cup, they felt closer to the real thing. We were the golden age of Israeli soccer,” he added.

In Israel, there is little doubt about the veracity of that statement. Aside from giving Israelis a joyous national moment, that team also paved the way for Israeli soccer players to transfer abroad and play in the world’s best soccer leagues. Shlomo Rosenthal was the first-ever Israeli to play abroad, transferring to play in Germany’s top flight. Then Shpigel, who transferred to France. Shpigler, after a quick stint in Paris, joined American side New York Cosmos. By fateful coincidence, he was joined there by Pele—quite possibly the best soccer player in history, and the man who won the 1970 World Cup after beating Israel’s rival, Italy, in the finals. 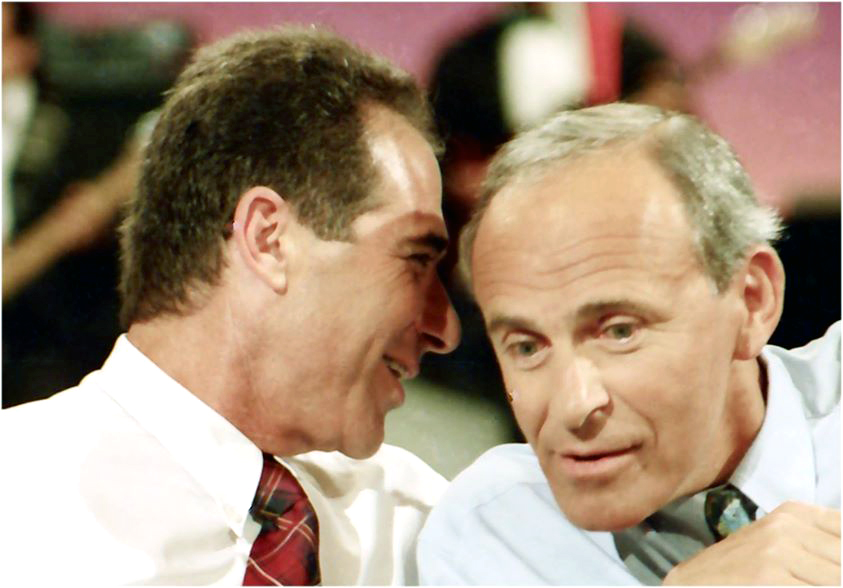 Spiegel (left) and Spiegler together, circa 1991. (Nachoom Assis, Wikimedia Commons)

These national heroes paved the way for many that came after them, as Israeli soccer players have continued finding individual success in the world’s top soccer leagues to this day. Yet despite the multitude of talented players since, none have been able to match the success of that famed 1970 squad. Today, the Israeli men’s national team is ranked 98th in the world, which is both its lowest ever and worlds away from returning to the World Cup.

“I certainly think that this national team did something that, in Israel’s 70 years of existence, is very meaningful in our history,” Rivlin said as his meeting with the players wrapped up. “That team, all of you here with me today, are worthy of receiving the Israel Prize,” he added. The Israel Prize is an annual award considered as Israel’s highest civil honor, awarded to individuals who have contributed to Israeli society in a significant way.

Shpigler, always the star, concluded by saying: “I think we received our prize in 1970.”

END_OF_DOCUMENT_TOKEN_TO_BE_REPLACED

Opinion | You Were Finally a Mensch, Mr. Snyder

END_OF_DOCUMENT_TOKEN_TO_BE_REPLACED

Aviva Kempner on ‘The Spy Behind Home Plate’

The Spy Behind Home Plate, the fascinating story of the 1920s-1930s baseball catcher Moe Berg, is the latest film by Aviva Kempner.

END_OF_DOCUMENT_TOKEN_TO_BE_REPLACED

We asked experts and aficionados to recommend their top five books on timely and intriguing subjects—from trends in American Judaism to Jewish romance.

END_OF_DOCUMENT_TOKEN_TO_BE_REPLACED

Updates on Israel’s progress in the Winter Olympics.

END_OF_DOCUMENT_TOKEN_TO_BE_REPLACED

Politics and propaganda are inseparable from the Olympic spectacle—though perhaps never more patently than in Berlin in 1936.

END_OF_DOCUMENT_TOKEN_TO_BE_REPLACED

Book Review // When Basketball Was Jewish: Voices of Those Who Played the Game

In Farewell to Sport, published in 1938, the popular New York Daily News sports columnist Paul Gallico, when departing the world of sports to write fiction (The Poseidon Adventure later became one of his best-sellers), reflected on the wide variety of sports and sports figures he had covered.

END_OF_DOCUMENT_TOKEN_TO_BE_REPLACED

Going for Gold at the Jewish Olympics

Since 1932, the Maccabiah Games have drawn the finest Jewish athletes to participate in a wide array of events.