Moment is proud to introduce The Wisdom Project: Inspirational conversations with wise people who have been fortunate to live long lives. This week’s conversation is with Joan Gross Scheuer, 101, of New York City. 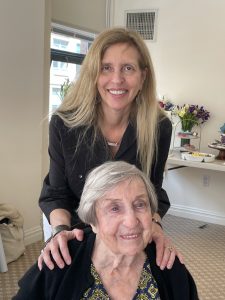 Joan Gross Scheuer, a retired economist and education champion, is a pioneer in remedying inequality in public schools. An activist in school finance, her efforts in the 1970s led to increased public school funding for low-income districts in Westchester County, NY. Her grant writing to establish pre-school education programs in the county became a model for the national Head Start program. A Ph.D. economist, Joan is a graduate of Bryn Mawr College in Pennsylvania and New York University. During World War II, while men were at war, she worked for the War Production Board in Washington, DC, helping to allocate scarce materials such as steel, aluminum and rubber. An accomplished watercolorist, Joan and her late husband, Richard “Dick,” formed the Richard J. and Joan G. Scheuer Family Foundation before his death in 2008. Moment recently visited with Joan to talk about life, learning and longevity. Joan celebrated her 101st birthday in New York City on May 28, 2022.

What have you learned over your lifetime that you think people at every stage of life can learn from?

To listen. L-I-S-T-E-N. You have to be aware of other people at all times. You come to value making an effort to not just listen, but hear other people. I came to value this by living a long time. We really have to make an effort to understand each other. There’s no more misunderstanding now than there always was, but we’re still not doing it. We have to listen, we have to hear each other. Old people never have listened to young people enough. People in general don’t pay enough attention to each other. It takes effort to understand each individual. That’s why I’ve always been a big enthusiast of education in all its forms.

What do you think of the state of the world today?

Is there anything in your life so far that you would have done differently?

I suppose so, but I don’t know what.

Was there ever a time in your life when you suffered or struggled with something? What advice would you give to people now who are going through something similar?

Everybody struggles with different things. I don’t think my advice would be very useful, do you? But here’s one thing: don’t listen to people, you have to do it yourself. Don’t listen to people trying to tell you to be something other than you are. Lots of people try, very few succeed. I have been extremely lucky. I’ve had a great deal of good luck. I didn’t know it was luck at the time. I have so much to be grateful for.

How does one attract luck?

Well, luck is different for a lot of people. I don’t know whether to attribute mine to my parents or schooling…  whatever it is, I’m very grateful for it.

What role has gratitude played in your life?

I was what my mother called a happy child. That’s the way to keep being. I genuinely enjoy being happy and grateful. Gratitude comes from recognizing the part in your life that is happy. I think that’s why I’m grateful for a lot of things. I recognize what’s made me happy. I recognize that I have been lucky.

What do you want to do for the rest of your life?

I face the next 100 years very optimistically! I’ve lived gracefully and I also want to die that way.

A lot of young people, especially on social media, talk about their “F-O-M-O”—“Fear of Missing Out.” From your perspective of years, what experiences should they really not miss out on?

None of us can do everything, so I guess there are a lot of experiences that most of us are missing. I would say to look around yourself and notice the opportunities that are right in front of you. We do the best with what we have at hand.

What have you changed your mind about, over the years? How have some of your views evolved?

Who has inspired you in life?

I’m very boring about admiring people you’re supposed to admire! My husband inspired me. He taught me a great deal. My husband was a gentle person, a true “gentleman.” He was not shaken by events that didn’t go well. We had a great life together. I always looked to him for support. For sixty-three years. He was one of the things in my life that I call “good luck.”

What about your parents?

My parents were very helpful. My father was very proud and it didn’t do him any good. I realized that long after he died—I could see that he didn’t help himself in that regard. My mother was a very gentle, quiet, thoughtful person, involved in the League of Women Voters. Both my parents inspired all three of their girls—I have twin sisters—to be good citizens. They conveyed that to all of us.

What would you say to inspire others?

Try to find the ways to be optimistic about life.

Many people aren’t right now. How would you suggest they counteract the negativity they see and read about in the news?

Ignore the bad stuff. You don’t have to be influenced by it. You don’t have to take on the burdens of the world. I am interested in history and I read the newspapers but that doesn’t mean I have to get unhappy myself about how things are going.

One thought on “The Wisdom Project | Joan Scheuer”