Israel’s half-century of control over its sacred sites has allowed problems to fester.
Home / Issues / 2017 May-June / Opinion | The Trouble With Holiness 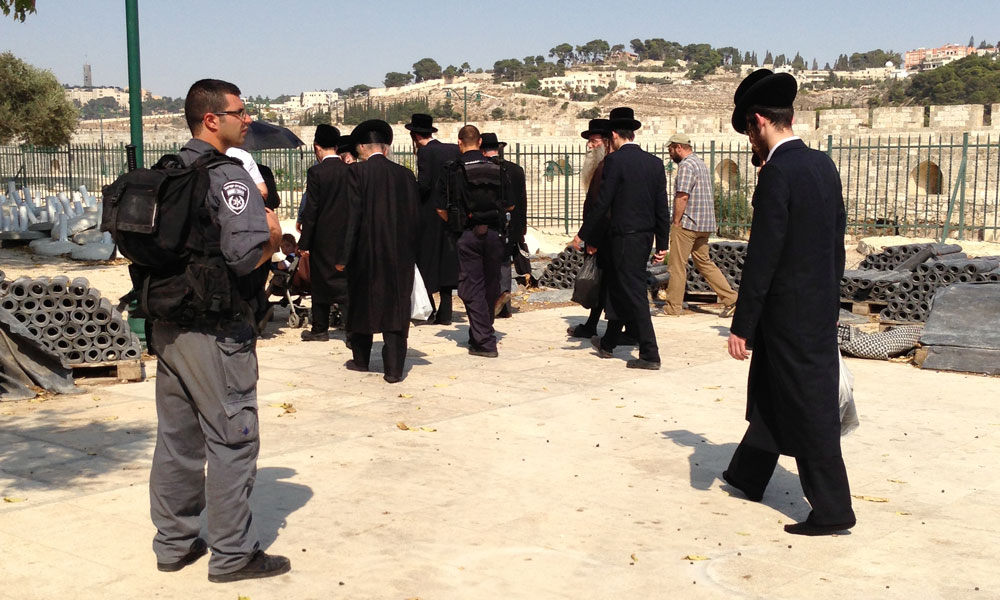 Israel’s half-century of control over its sacred sites has allowed problems to fester.
by Marshall Breger May 10, 2017 in 2017 May-June
0 Comments
0 Likes

The “miraculous” victory of 1967 returned major holy places in Jerusalem and the West Bank to Jewish control, including the Temple Mount in the Old City (known as Haram al-Sharif to Muslims), the Tomb of the Patriarchs in Hebron and Rachel’s Tomb in Bethlehem. This unexpected bounty, like other seemingly wondrous developments, actually fueled intense friction between Jews and Muslims. Sadly, the miracle of Israeli control of the holy places over 50 years has reduced the possibility of a peaceful solution to the wider conflict.

The effect on the Jewish world of regaining the holy places was transformative. Secular kibbutzniks flocked to the Western Wall to put on tefillin they had discarded since their bar mitzvahs. General Moshe Dayan triumphantly proclaimed, “We have returned to all that is holy in our land…never to be parted again.” Army Chief Rabbi Shlomo Goren asked that Regional Commander Uzi Narkiss place 100 kilograms of dynamite in the Dome of the Rock so as to clear the way for rebuilding the Third Temple. To which, according to one account, Narkiss responded: “Rabbi, if you don’t stop I will take you from here to prison.”

Pulling back from his statement, Dayan took down the Israeli flag flying on the top of the Dome of the Rock and returned operational control of the Haram to the Muslim religious authority, the waqf, thus separating—in theory at least—Israel’s claim to sovereignty from the practical business of administration and management. Dayan further ordered that Jews could not be forbidden from visiting the Temple Mount but that they could not pray in a Muslim site. This forestalled immediate practical conflicts, but it stoked tensions.

Over time, both Jews and Muslims have focused more on the sites’ religious aspects. In part this reflects the increased religiosity of both publics and, on the Jewish side, a tinge of messianism—the idea that a Jewish presence on the Mount brings the Messiah closer.

In the past five years, the trouble has escalated. Muslim leaders have proclaimed the Haram in danger, while groups of seemingly pious Muslim women, known as murabatat, have harassed Jewish visitors. Right-wing Knesset members have provocatively visited; so did Ayman Odeh, the head of the Joint (Arab) List. Israelis often visit in large groups, fueling Muslim fears of a Jewish takeover. Government ministers have spoken of their dreams of expanded sovereignty and even of building the Third Temple. At least twice, the U.S. has had to bring Prime Minister Benjamin Netanyahu and King Abdullah of Jordan together to hammer out agreements to reduce outbreaks of violence.

The holy places could have been a bridge for peace. The Camp David summit in 2000 proposed many innovative compromises. President Bill Clinton wanted to give the top of the Temple Mount (the Haram) to the Palestinians and the bottom (the Western Wall) to the Jews. King Hussein of Jordan urged that the Mount belonged to God and that the issue was one of management, not sovereignty. Others suggested a consortium of Muslim countries including Saudi Arabia and Morocco to manage the site. None of these suggested compromises gained purchase, not least because nobody (i.e. the United States) sought buy-in from other Muslim nations beforehand.

Religion itself could have played a positive role. For centuries, normative Jewish law had forbidden Jews from ascending the Temple Mount, lest they step accidentally into the inner sanctum, the Holy of Holies. And in 1967 most Jews observed this prohibition. But the ban has slowly eroded. While the Israeli chief rabbinate and the ultra-Orthodox still forbid Jews from going up to the Temple Mount, more and more national religious and settler rabbis allow and indeed encourage it. And when an issue of political management slides into a religious conflict, compromise becomes much more difficult. While a few hundred Jews a year ascended the Temple Mount just after 1967, now many thousands do.

Nationalism, of course, plays a role. From a settler perspective, entry onto the Temple Mount underscores Jewish sovereignty and keeps Muslims from claiming sovereignty for themselves. Possession, to put it bluntly, is nine-tenths of the law.  Another problem (and a ticking time bomb) is the Israeli courts. Unwilling to bar Jews from praying at a site holy to Jews, the courts have placed themselves in a bind. They have affirmed the principle of access to prayer—but, at the same time, they routinely accede to every police request to refuse a permit for prayer on grounds of public order. And the police always make such a claim. Intellectually this approach is incoherent (at least to an American). At some point, be it 2 a.m. Thursday or 5 p.m. Sunday, the claim of public order will not stand.

What to do? First, the Netanyahu government must act swiftly to tamp down right-wing rhetoric about the Temple Mount and Jewish sovereignty. Second, Netanyahu must enforce the ban on both right-wing MKs and MKs from the Joint (Arab) List ascending the Mount (something he has unfortunately said he will not do). Third, the Israeli government must bring the Palestinian community into the conversation, even if informally, to reduce tension on the Mount.

Fourth, the problem of the holy places must be set in the context of a real peace process—one with light at the end of the tunnel for Palestinians. Senior (even radical) Muslim clerics have suggested to me that if the political issues could be resolved, they could envision Islamic solutions that would allow Jewish prayer on the Haram.

And finally, we need theological investigation of how the sanctity of one religion’s holy place is changed by the presence of the “other.” From a theological perspective, can such holy places be shared, or are they defiled by the presence of the other, making political compromise impossible? What do the different religions require—sovereignty, control or just freedom of use? These subjects are under-studied, but the answers can tell us much about the possibilities of peace.