The Future of Berlin’s Jewish Museum

Director Hetty Berg, who took over as director at the beginning of the pandemic, reflects on the museum’s controversies and successes.
Arts & Culture, Jewish World, Latest

Since it opened to the public on September 13, 2001, the Jewish Museum Berlin has established itself—alongside Warsaw’s Museum of the History of Polish Jews—as one of Europe’s two premier Jewish museums. It is one of the German capital’s most popular tourist attractions, with the Daniel Libeskind-designed galleries drawing in around 700,000 visitors a year. But its particular status has also made the museum a political lightning rod, and the museum has had to endure a rocky period in recent years following the resignation of its previous director, the German Judaic studies scholar Peter Schäfer.

Now the Jewish Museum Berlin has a new core exhibition, a new children’s museum and a new director: Hetty Berg took up the post on April 1, 2020, having spent nearly two decades leading the Jewish Historical Museum in Amsterdam. On March 14, 2020, Berlin’s Jewish Museum had announced its closure “until further notice” as Germany headed toward its first COVID-19 lockdown; two weeks later, Berg began work at the museum. “The strangest feeling was the empty museum, which usually has a lively, bustling atmosphere,” says Berg. “My colleagues were at home and I had to meet my new staff on Zoom, but the fact that we were closed did not mean we stopped working.”

Indeed, work continued on two major projects that were already in motion at the time Berg took over: the ANOHA Children’s World, located in a separate structure across the street from the main museum, and the new core exhibition, “Jewish Life in Germany: Past and Present,” which opened in August 2020. Housed in the Libeskind building, with its gleaming titanium-zinc façade and angled, zigzagged structure evoking a deconstructed Star of David, the exhibition is a more streamlined, approachable and digestible journey through German Jewish history than that of its predecessor. The hybrid exhibition is at once a voyage through the great span of German Jewish life, from its earliest traces to the present day, and an introduction to Judaism in the various forms as it’s practiced in daily life. 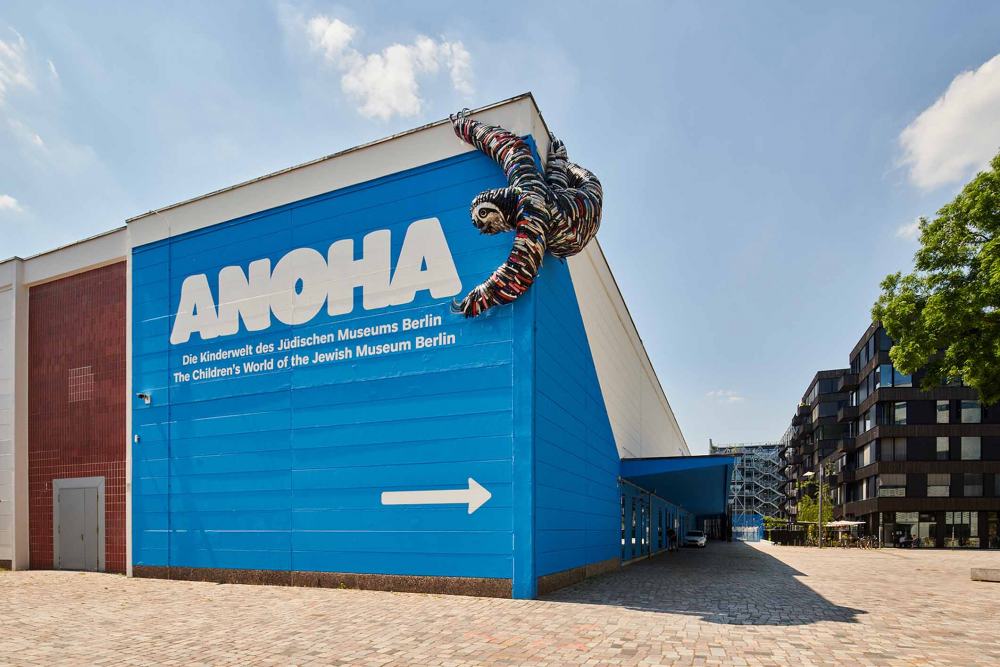 “Jewish Life in Germany: Past and Present,” which Berg describes as “very thoughtful, engaging and well-designed,” is a reflection of the two audiences the Jewish Museum Berlin wants to reach. Jews, whether German Jews or international visitors, are “for me a very important visitor group,” Berg explains. In its output and outreach, the museum seeks to give voice to the plurality and diversity of contemporary Jewish life in Berlin, organized both inside and outside of official structures. But the museum is also a “museum for everybody”—one that wants to “foster relations” Jewish and non-Jewish communities. Part of the museum’s mission statement, rewritten after Berg became director, is to “invite people from various backgrounds to engage openly and actively with Jewish history and contemporary Jewish life in Germany.”

Coming from Amsterdam, Berg was very aware that she was taking over an institution with a “very symbolic role,” she says, the German government having made the political decision in the 1990s following reunification to found a Jewish museum in Berlin and house it in what has become an iconic architectural structure. “In that sense, the Jewish Museum Berlin plays a very different and important role in Germany and in German culture” when compared to other Jewish museums in Europe, Berg stresses, and its centrality and prestige means its work attracts a tremendous amount of attention and criticism in Germany, both in politics and in the press.

Particularly controversial was 2013’s “The Whole Truth: Everything You Always Wanted to Know about Jews,” dubbed as the “Jew in a box” exhibit for its centerpiece, which had different members of the Berlin Jewish community sit in a Plexiglas container one at a time and take questions from visitors for two hours. The American journalist James Kirchick, who served as the “Jew in a box” one afternoon during his time resident in Berlin, described the experience as “an ironic, meta-commentary on what it is like to live as a Jew in contemporary Germany.” He added: “More often than not, I felt like a therapist for anxious Germans working through their fraught relationship to history.”

In 2014, “Snip It!” addressed a hot-button topic in Germany: circumcision. But it was 2017’s “Welcome to Jerusalem” that accounted for former director Peter Schäfer’s downfall. The exhibit was criticized by the Israeli government for adopting the Palestinian narrative about Jerusalem, and it was seen as emblematic of an institution that had given too large a platform to critical voices outside of the German consensus on Israel, including supporters of the Boycott, Divestment and Sanctions (BDS) movement. In June 2019, Schäfer resigned in the wake of a tweet from the Jewish Museum Berlin’s official account, which appeared to endorse criticism of the German government’s decision to condemn the BDS movement as antisemitic. 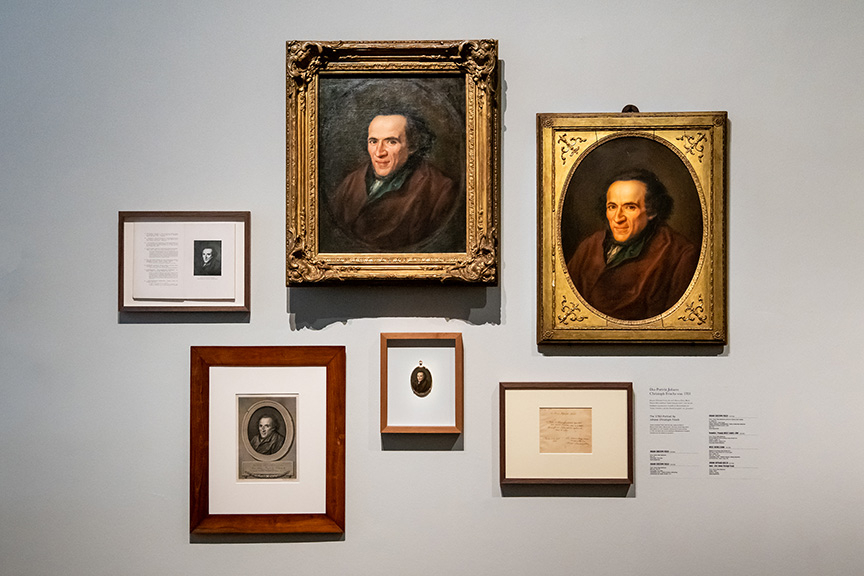 From the exhibition “We dreamed of nothing but Enlightenment” – Moses Mendelssohn; Jewish Museum Berlin (Photo credit: Svea Pietschmann)

By the time of Schäfer’s resignation, the relationship between the museum and the Central Council of Jews in Germany had broken down. Its president, Josef Schuster, said at the time: “The Jewish Museum Berlin seems to be completely out of control. Under these conditions, one has to wonder whether the term ‘Jewish’ is still appropriate.” The chair of the museum’s board of trustees believed Schäfer’s departure offered the opportunity for a reset and hoped the museum henceforth could concentrate on its actual work.

“From the beginning, it was very important to bring a kind of trust back in the institution,” Berg says. Her appointment was welcomed by the Central Council of Jews in Germany, with Schuster describing her as a “highly qualified” museum manager whom he hoped would “show empathy for the Jewish community in Germany and Israel” and steer the museum back into “calmer waters.” While debate and discussion can be an asset, because it means the museum is having “an impact on people,” Berg says, those aforementioned controversies “did a lot of damage to the people that had been working here,” too. Confidence had to be restored not only externally but internally, and “I think we have succeeded very well in that sense.”

In addition to the museum’s new core exhibition and children’s museum, the Jewish Museum Berlin is currently showing an exhibit on the life and work of the German Jewish Enlightenment philosopher Moses Mendelssohn. “What is really important, and why I also think we play an important role for the people we reach, is that we really invite people to engage actively with Jewish history and contemporary Jewish life in Germany,” Berg reflects about the museum’s role going forward in a city and country that is becoming ever more diverse. “The museum simulates reflection on the past and also the present, and hopefully we fight stereotypes and prejudices about Jews.” Berg envisages a Jewish Museum Berlin that is open to everyone and where meaningful, substantive conversations continue to take place.

Victimhood in the Land of the Perpetrators

More than 20 years in the making, the Documentation Center for Displacement, Expulsion, Reconciliation aims to initiate a conversation about forced migration in 20th-century Europe.

END_OF_DOCUMENT_TOKEN_TO_BE_REPLACED

The Remarkable Odyssey of Angela Merkel with journalist Kati Marton in conversation with Amy E. Schwartz

Angela Merkel, who just stepped down as German chancellor after a remarkable16 years, has redefined the image of a woman leader. A pastor’s daughter raised in Soviet-controlled East Germany, Merkel worked as a research chemist before entering politics and rising to become the unofficial leader of the West. Award-winning journalist Kati Marton, author of The Chancellor: The Remarkable Odyssey of Angela Merkel, shares how Merkel helped shape Germany into what some call the world’s moral center, and explores her legacy—including allowing Middle Eastern refugees to enter Germany while the world looked away. She also discusses the rise of the far right Alternative fur Deutschland (AfD) and Merkel’s complicated relationships with other world leaders such as Barack Obama, Donald Trump and Vladimir Putin. Marton is in conversation with Amy E. Schwartz, Moment’s Book & Opinion Editor.

END_OF_DOCUMENT_TOKEN_TO_BE_REPLACED

Emily Haber, Germany’s Ambassador to the U.S., discusses the current forms and manifestations of antisemitism in Germany, and how it is connected to other European movements. Ambassador Haber is in conversation with Robert Siegel, Moment special literary contributor and former senior host of NPR’s All Things Considered. This program is hosted by Moment Magazine with the support of the Joyce and Irving Goldman Family Foundation and co-presented by the German Embassy, Washington.

END_OF_DOCUMENT_TOKEN_TO_BE_REPLACED

Facebook Twitter Pinterest linkedin Telegram
In August, far-right mobs in the eastern German town of Chemnitz hunted foreigners through the streets. In the chaos, a kosher restaura...

END_OF_DOCUMENT_TOKEN_TO_BE_REPLACED

Unravelling the Words of an Unlikely Villain

In seeking purity, do we risk missing the bigger picture?

END_OF_DOCUMENT_TOKEN_TO_BE_REPLACED

“We try not to debunk the stereotypes from the Jewish side, but instead show the participants how stereotypes work in general.”

END_OF_DOCUMENT_TOKEN_TO_BE_REPLACED

One thought on “The Future of Berlin’s Jewish Museum”