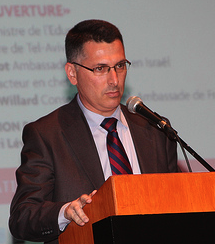 “No other country in the world, in its official curriculum, would treat the fact of its founding as a catastrophe,” categorically stated Education Minister Gideon Saar in response to a recent controversy over an unapproved Israeli textbook.

The textbook in question is a history textbook used by Shaar Hanegev, a liberal high school in southern Israel.  In this teaching of Israeli history, the authors—a group that includes both Israeli and Palestinian teachers–offer competing versions of the establishment of Israel. On one side of the page is the traditional Israeli narrative and on the other side the traditional Arab one. The middle of the page is left blank so that students can add their own thoughts.   As the Christian Science Monitor reported, this book is so incendiary because “the row drives at the heart of Israeli identity, shaped by tales of Jewish heroism in the War of Independence that gloss over the fate of the Palestinians. The Israeli narrative asserts that Palestinians left their homes in what is now Israel of their own volition. The Palestinians contend that they were driven out, and they refer to the creation of Israel as the nakba, or the catastrophe.”  As it stands now, the principal of school has been called in to meet with the Ministry of Education. Teachers at the school have been ordered to stop using the book because it has not been approved.

The idea that a Palestinian narrative cannot even be broached within the classroom is deeply disturbing.   It is in this very space where children are taught the fundamentals of how to best understand and relate to their world.  What they learn there shapes their worldview for the rest of their lives.  If Israeli teachers are not allowed to offer a nuanced and complex worldview, such as the one put forth by this textbook, how will these students learn to relate to the Israeli Arabs in their midst, let alone finding new ways to address the Israeli-Palestinian conflict?

Equally troubling is Saar’s comment that no country would treat the fact of its founding as a catastrophe.  Of course he is correct.  Many countries have presented an idealized founding and historical narrative to their children in a national curriculum.  One would be hard-pressed to find a country–especially one that feels constantly under threat–that has allowed space in the official narrative for alternate and contradictory versions of history.  One need look no further than the American treatment of the Native American experience or the French government’s version of its World War II activities to see the disconnect between whitewashed fantasy and the more tangled reality. But not volunteering such contrary narratives is entirely different than denying their basic right to exist.  And it is important to realize that this is a decision made by a single high school, not a rewriting of the national curriculum.  Allowing counternarratives is not to admit defeat or to call into question the very existence of Israel as some on the Right contend.  Instead, it demonstrates strength and courage to confront what has been until now, according Israeli historian Tom Segev, ignored and distorted.

Dealing openly with the Palestinian nakba with Israeli high school students is not a magic bullet of peace, but it doesn’t have to be yet another obstacle either.

Symi Rom-Rymer writes and blogs about Jewish and Muslim communities in the US and Europe.