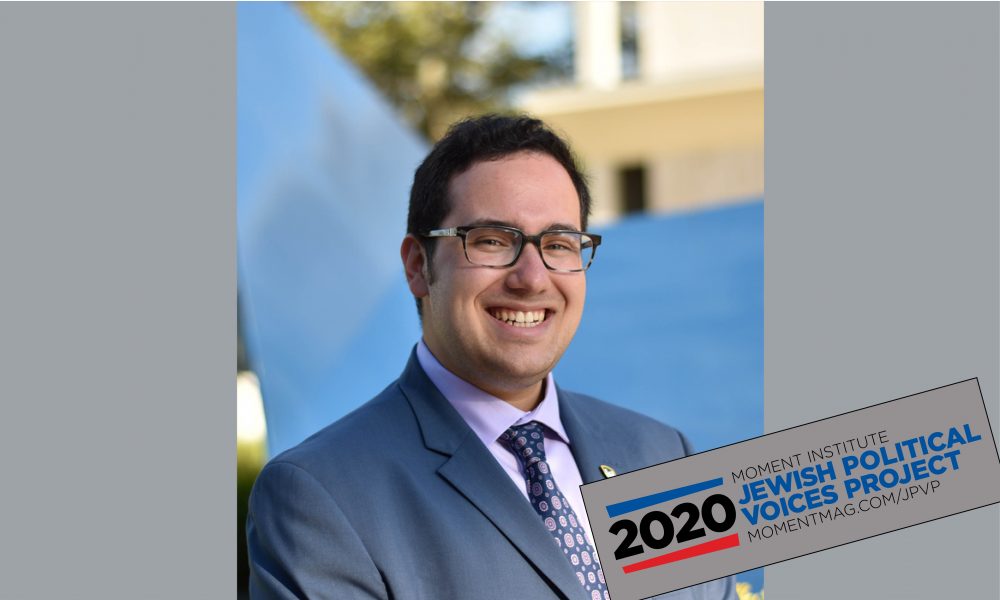 Stuart Baum (22), a Democrat from Detroit, MI, attended Jewish day school growing up and is a recent graduate of Wayne State University where he served as student government president. Baum is an intern in the Michigan state legislature, where he serves as a community liaison, connecting residents’ concerns with legislative priorities. He is also working at the Brennan Center for Justice on advancing and protecting voting rights. As a member of the LGBTQ community, he would like to see more attention paid to gay rights in the presidential campaign.

Overall, I would say his presidency largely has turned out the way I thought it would be; an absolute disaster both in the domestic sphere and the international arena.

Well, his central promise was to make America great again, and I think he has utterly failed to accomplish that. He has had success at repealing regulations, which has been horrible, but he has failed to succeed legislatively, and many of his executive actions have been blocked by the courts. Most of all, he has not drained the swamp, but instead, he has made DC more swampy.

At the start of the primary, Joe Biden did not seem to have what it takes to win, but he has impressively turned that around. I have appreciated his conciliatory approach to the progressive wing as well. He’s still not my favorite candidate, but I will vote for him against Trump.

I think there is a chance that he pulls out a win like he did in 2016. But he will have to stop bleeding marginal supporters, and really get the virus under control. I don’t think he has the capacity to do that. But despite what the polls say now, things will tighten up closer toward the election.

Biden needs to rebuild the Obama coalition and inspire turnout from less frequent voters, like younger voters and new voters. He needs to have good surrogates reach out to these voters in particular. He also needs to demonstrate to marginals and moderates that he is capable and reliable as a leader. I think he is already doing a good job of that, but he has to work harder to reach non-traditional and younger voters.

Donald Trump is incapable of bringing the country together because he himself has helped to sow that division. There is nothing he can do to undo the damage he has already done, short of leaving office.

Joe Biden will have to focus on getting the virus under control, re-engaging with our allies, and stimulating our economy. In the meantime, he can roll back the regulatory damages that Trump instituted and he should start the legislative effort to expand healthcare. He needs to push on much more, but I am not sure if he can do so in the first 100 days given these primary pressing concerns.

I am very concerned that without bailing out the States, they will lack the funding to administer safe and secure elections during COVID. I am also concerned that Trump and other Republican leaders will continue to undermine confidence in the election and continue to disenfranchise voters with their policies designed to obstruct access to the polls.

In-person voting opportunities should be preserved, but they should absolutely not be required. Voting by mail has existed for decades and is safe, especially during a pandemic.

I think that marginal and moderate voters will see how Trump has failed to rise to the occasion to meet the needs of these dual crises but has instead fanned the flames to make them worse; turning them away from supporting him.

As things are today, and especially if we get a full second wave of the virus, I believe that in-person turnout may be depressed. As long as voting by mail alternatives are promoted, and in-person access to the polls is retained, that shouldn’t depress overall turnout. Already in Michigan, where barriers to voting both in-person and by mail have been lessened, it seems like we may see higher overall turnout than ever before; such measures should be expanded nationwide.

Absolutely. Regardless of how bad the virus gets, or how easy access to voting by mail becomes, many voters will still rely upon in-person voting. It is crucial that polling locations are kept open and that access to voting in-person is not abridged by this pandemic in November.

Personally, I will be voting by mail, and I think that option should be promoted to the greatest extent. Barriers to voting by mail, if any, should be removed. But, we must retain in-person voting options as well.

Though we have made much progress, we are losing ground, and that is solely due to the failure of governments to take this seriously and the failure of residents to abide by basic rules. Michigan has been a national leader in fighting this virus, and I have been very impressed with our progress, but I think we are going to have to tighten up restrictions again a bit longer in order to regain control of the spread. Ultimately though, we need national leadership and direction to control the spread like other countries have succeeded in doing.

I recognize the tremendous burden that school closures have presented to children and parents all over the country. But if things continue as they are, I just don’t see a way that we can justify reopening schools. I don’t think it will be possible to reopen them in a way that doesn’t spread the virus but also produces the same positive learning experience for students.

We need to reject the false premise that there is anything wrong with voting by mail. The current controversy is based on falsehoods, and should not be given any legitimacy.