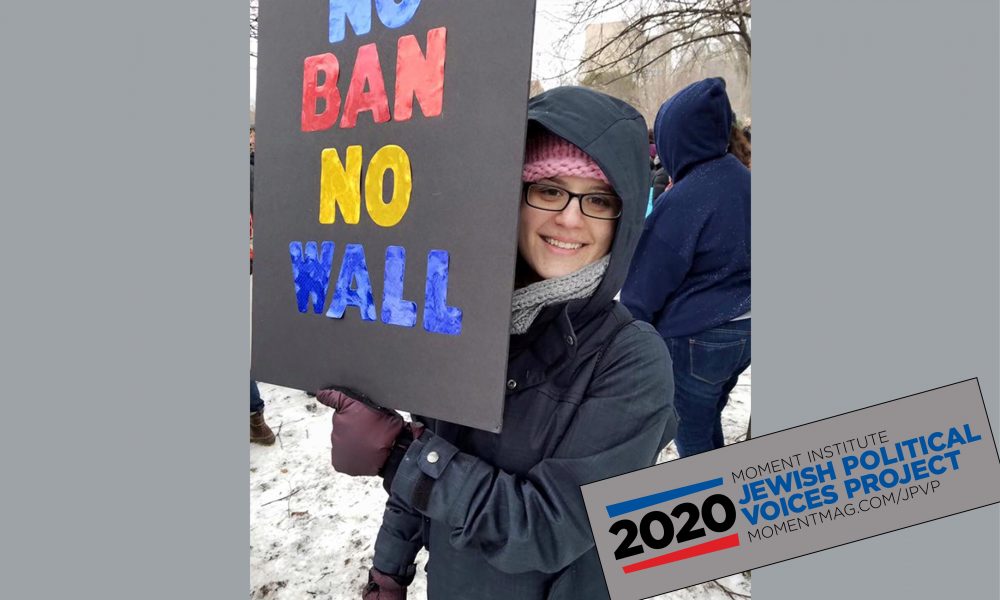 Stephani Wudarski (30), a Democrat from Pittsburgh, PA, does not belong to a synagogue but attends High Holy Day services with her family and went to Israel on Birthright. She works for a managed Medicaid company and has a background treating substance use disorders. She was a passionate supporter of Kamala Harris and volunteered for her campaign until Harris dropped out of the race in December.

It is basically exactly how I expected, though I think the degree to which the GOP has continued to enable Trump is a bit worse than anticipated. I guess I assumed they would at least pretend to stand up to him when he blatantly abuses his power, e.g. commuting Roger Stone’s sentence, and when he poses a serious risk to our military, e.g. enabling and signaling to Putin he can continue to kill Americans without any repercussions. The very real risk Trump poses to democracy has never been more evident and was entirely predictable. The only surprising thing to me is how explicit his party has been in their support, despite anticipating they would back nearly all his “policies.”

I honestly don’t even know if it is worth qualifying his campaign “promises.” To build a wall and Mexico was going to pay for it? That was theatrics. To get rid of Obamacare but protect pre-existing conditions? He never had any real proposal here; it was all about undoing Obama’s legacy, not actual health care policy. Thankfully, despite some damage he has done to the markets, the Affordable Care Act is still in effect. To drain the swamp? Clearly, this “promise” came out of pure projection and the swamp has never been “swampier”. I never heard promises from him other than what had been implied; America first always meant Donald Trump first because he is incapable of caring about any other outcome. He wanted the opportunity to appear powerful and to make money off the presidency (though, I truly think he never expected to win and just wanted the attention/to make money off the campaign).

I think in some ways he has turned out to be a weaker candidate than I expected, and in other ways, much stronger. It is clearer now that rallies and debates are not his best mediums. However, he is showing strong leadership by the way he has been able to form coalitions of Democrats and ex-Republicans. He also seems to be tailored for this moment of widespread grief and loss and his ability to connect with others works well here.

Cheat. Have his enablers in the Republican Party continue to make access to the ballot box extremely difficult for minorities. Veto any legislation with funding for the post-office. I think after 2016, almost anything is possible. But I do believe if we have a free and fair election, his chance of winning is very small.

Picking Kamala Harris as his Vice President is the best chance at maintaining his current coalition of Democrats and Republicans, but I am also biased and have wanted Kamala Harris as VP since the day she dropped out of the presidential race. If the election is free and fair and voter turn-out is at or above 2016 levels, he will win.

There is no part of me that can even think about this possibility as there is zero doubt in my mind that he is incapable of bringing people together; that his goal is not to help the country but to help himself (at this point, he does not want to be humiliated by a loss and he also wants to stay out of jail). So, I don’t have an answer here other than to step down immediately.

I think every single federal institution needs to be rebuilt, which starts with changing the political leadership at the Department of Justice, Department of Education, Department of Health and Human Services, etc. The focus should (and I suspect, will) be on a cohesive COVID-19 response via funding, distribution of testing/a vaccine, and public policy initiatives such as a federal mask mandate. I think it is hard to think too much further in the future because the imminent need is to fill the federal leadership vacuum that is putting American lives at risk daily.

My concern is that Donald Trump has enablers everywhere in the government; and that somehow, they will help him cheat his way into winning another Electoral College victory. Additionally, I am concerned about Donald Trump’s ability to admit defeat and how he ends up conceding (hopefully). I think immediately following the election will be a very dangerous time, regardless of the outcome.

No, there is absolutely no evidence of widespread voter fraud and it should always be convenient and easy to vote. When you add a pandemic into the equation, there is an argument to be made that people should be required to vote by mail and not in-person.

I think there is evidence to suggest that his handling of both situations has lost him some support. To my surprise, his poll numbers seem to have decreased most significantly after he (or Bill Barr) ordered the teargassing of peaceful protestors in Washington DC on June 1st. So, if polling is any indication, then yes; his inability to lead during these crises seems to be changing people’s minds on who they will vote for come November.

Yes, though I am not entirely sure what the overall impact will be. It is clear that in-person voting will decrease dramatically due to people’s valid health concerns, the closure of voting locations across the country, and the increased opportunity in some states to participate in mail-in voting. It is unclear if this will increase turn-out as a result of easier access to voting; decrease turn-out as a result of less in-person access, or about the same as the different type of voting will cancel each other out.

I am not as concerned for PA as for other states, as the ability to request mail-in ballots has been widely expanded and thus will likely off-set closures of any voting locations.

Mail—it is easy and safe.

Pennsylvania has done a decent job of responding early and preventing any serious outbreak that overwhelms our hospitals and healthcare workers. It is upsetting that as a country, the pandemic has become almost entirely politicized. We could have been in a very different place if only for a few weeks we could get our act together. Our economy and health outcomes are and will continue to be, so much worse than it needed to be.

I think it is a challenge that no one is prepared for. It is going to be an utter disaster, unfortunately. I do not know what the “right” answer is. I do have concerns with kids not having the structure, as well as basic needs that the school settings often provide. At the same time, I am not sure there is a safe way to return to school since there is such a leadership vacuum across the country. It would take support, experts, and funding; something that prior to the pandemic had already not been sufficient in low-income areas. Overall, the disparities in education and other related metrics will increase substantially during this timeframe; and any efforts to mitigate this I think will unfortunately not have a significant impact until there is new federal leadership.