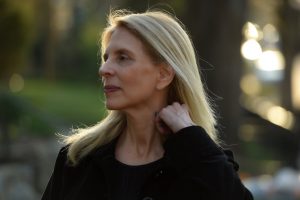 Award-winning journalist Nadine Epstein is editor-in-chief and CEO of Moment Magazine,  founder and executive director of the Washington, DC-based Center for Creative Change, founder of the Daniel Pearl Investigative Journalism Initiative for young reporters, and founder and editor of MomentBooks. She reported for the City News Bureau of Chicago and the Chicago Bureau of The New York Times, then later covered the U.S.-Mexico border and rural America. After a Knight-Wallace Fellowship at the University of Michigan, Ann Arbor, she taught in the Masters Program in Journalism there. She holds degrees in International Relations from the University of Pennsylvania, and was a University Fellow in the political science doctoral program at Columbia University. Epstein has written and edited books including the forthcoming RBG’s Brave and Brilliant Women:33 Jewish Women to Inspire Everyone, Elie Wiesel: An Extraordinary Life and Legacy, contributed to anthology collections including Racing in the Streets: The Bruce Springsteen Reader and The Late, Great Mexican Border: Reports from a Disappearing Line, and cowrote the short documentary Sastun: My Apprenticeship with a Maya Healer. Her articles and op-eds have been published in a wide range of publications including The Washington Post, Smithsonian, Newsweek and The New York Times. Epstein speaks internationally about anti-Semitism and other issues pertinent to the global Jewish community, and has been interviewed by The New York Times, The Wall Street Journal, All Things Considered, Al-Jazeera, among other media outlets. She  is also an artist, the creator of the iShadow Project and cofounder of TheMomentGallery.