This article is the first installment of Jewish Roots: An Occasional Series Exploring the Intersection of Jews and Agriculture.

The streets of Sosúa, a small beach town in the Dominican Republic’s Puerto Plata region, are crammed with trucks filled with limes, bananas and pineapples, motorcycles dancing around heavier vehicles, and restaurants spilling out onto the sidewalk. But while Sosúa resembles many other Caribbean towns, it was also once a haven—in the form of a dairy and agricultural farm—for more than 700 Jews fleeing Nazi Germany and Austria. “When you came from Europe you were an inferior race, you were a Jew. A nobody, a Jew,” Sosúa settler David Kahane remembered in a video from the 2008 “Sosúa Exhibition” at New York’s Museum of Jewish Heritage. “You came to Santo Domingo, so all of a sudden we were not anymore subhuman.”

The circumstances leading to the Dominican Republic’s embrace of the Jews were unusual. In 1938, the Evian Conference brought together world leaders from 32 countries to discuss the Jews’ plight. According to the United States Holocaust Memorial Museum, “During the nine-day meeting, delegate after delegate rose to express sympathy for the Jews. But most countries, including the United States and Britain, offered excuses for not letting in more refugees.” Golda Meir, a representative from Palestine and later the Prime Minister of Israel, was not allowed to address the delegates. In her autobiography, My Life, she writes, “I don’t think that anyone, who didn’t live through it, can understand what I felt at Evian—a mixture of sorrow, rage, frustration and horror. I wanted to get up and scream at them all, ‘Don’t you know that these ‘numbers’ are human beings, people who may spend the rest of their lives in concentration camps, or wandering around like lepers, if you don’t let them in?'” Alone among the diplomats, Hector Trujillo, the brother of Dominican dictator Rafael Trujillo, offered asylum to “between 50,000 to 100,000” applicants.

Two years later, in May 1940, 37 Jewish lawyers, doctors and other professionals arrived in Ciudad Trujillo, known as Santo Domingo before and after Trujillo’s reign from 1930 to 1961. Rudolf Herzberg, one of the settlement’s first 37 residents, told The New York Times in 1940, “We will do our best here, and we hope to stay and raise our children here.”

The motivations behind Trujillo’s hospitality are suspect. A year before the Evian Conference, Trujillo had ordered his troops to kill many of the Haitians living in the northwestern region of the Dominican Republic, resulting in 20,000 deaths and a loss of esteem in the global arena. Some speculate that his generosity at the Evian Conference was a ruse to bolster his popularity in the public eye. In addition, he likely wanted to use the Jews’ labor to develop the northwestern region of the country.

Despite initial hopes, the outbreak of World War II and the Nazi’s 1941 ban on Jewish emigration prevented the number of Jews entering the Dominican Republic from even reaching 1,000. Strict screenings by the Dominican Republic Settlement Association (DORSA), an association founded with the help of the American Joint Distribution Committee (JDC) that was dedicated to the Jewish settlers, limited immigration to Jews exhibiting peak stamina, adaptability and social skills. Consistent with the discriminatory racial undertones of the policy, DORSA preferred male applicants because women were less likely to leave Europe alone and Trujillo hoped they would intermarry with Dominican women.

Most elements of life in Sosúa were communal. While the men worked on the farm and in the fields, the children attended school, where they learned Spanish. The few women who lived in the settlement cooked dinner for all the settlers, who ate it together in their dining hall. When the time came for rest, each bed in the dormitory-like living space settlers shared was lined with mosquito netting to prevent malaria. If settlers did not check their sheets before falling asleep, it was possible to find a tarantula nestled within.

Each settler who arrived in the Dominican Republic received 80 acres of land, 10 cows, a mule and a horse from the Dominican Republic government, which had also received funding from the JDC. For the settlers, living in two barracks and a few shacks, the early years were tough. Experts described the soil as rocky and shallow and the climate as dry and hot, and the settlers, who came from backgrounds in education or business, had never worked in agriculture. Some settlers who found themselves unable to adapt to the agricultural jobs became school teachers, doctors or barbers. These exceptions, however, were rare.

The immigrants developed two reliable streams of revenue: Cooperativa Industrial Lechera C. por A (CILCA) and Ganadera. CILCA processed milk twice a day in preparation for creating butter, milk and cheese products alongside local workers. Ganadera focused on meat products. Cattle, pigs, horses, mules and donkeys were all present on the settlement. Olga Roman, the daughter of the head of construction projects at Ganadera, says in the Sosúa Exhibition video, “The relationship between the immigrants and the Dominicans was very, very good. They got along very well.” By the 1970s, the two companies were combined under the name Productos Sosúa; it is now one of the most prominent milk and dairy producers in the Puerto Plata region.

When settlers were not working, they created spaces where they could enjoy music, films and other forms of entertainment. With few resources, they improvised by bowling in an alley behind a popular cafe or setting up a movie theater in the DORSA office building. Chess tournaments often presented a heated scene, challenged only by card games. On lazy Saturdays and Sundays, the settlers would gather at the beach. And in an attempt to preserve their European memories, they would listen to classical music and operas.

Despite the settlement’s steady growth throughout World War II, after the war a majority of the Jewish refugees of Sosúa left the Dominican Republic for the United States and other countries in search of new economic opportunities, causing Sosúa’s Jewish population to decrease from almost 700 to a few hundred. Many who left the country continued to consider themselves Dominicanas. Referring to those who left, Judith Kibel, a Jewish settler who remained in Sosúa, told The New York Times in 1981, “A Jew does not want anymore to live in a little village. My husband was not a farmer and I was not a farmer’s wife.”

Trujillo was assassinated in 1961, and by that time, the Jewish population in Sosúa hovered at around 150. In 1983, Luis Hess, one of the Jewish settlers who remained in Sosúa, told The New York Times, “The happy side is that Sosúa saved many lives, but the old settlers are dying and only the young people are left, so this is becoming more a Dominican town and tourist center. There will always be traces of Jewish culture, but it has become rather lonesome for us here. There are now more settlers in our Jewish cemetery than there are living here.” 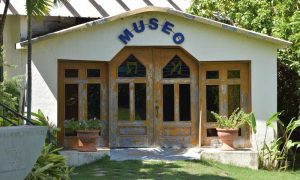 Today, the Museo Judio de Sosua remains to share the history of the Sosúa settlement, detailing what occurred before, during and after its peak. (Credit: Phyrexian, Wikipedia)

Of those who remained, many moved to Santo Domingo to raise their families. Some of these families were interracial and some were of German and Austrian origin. Around 30 Jewish families still live in Sosúa today, including that of Ilana Neumann de Azar, the mayor of Sosúa from 2010 to 2020. She was the daughter of a Dominican mother and a Jewish father. Her grandfather had been a Jewish settler in Sosúa. The evidence that remains of the once-bustling Sosúa settlement is a museum dedicated to the Jewish community, a synagogue, a nearly hidden cemetery and the legacy the Jewish farmers left on the Dominican Republic and the dairy industry today.

END_OF_DOCUMENT_TOKEN_TO_BE_REPLACED

The Yazidis: A Faith Without A Future?

In 2014, ISIS forced them from their homes in Iraq. Many fled the country. The rest remain displaced, afraid to return home.

END_OF_DOCUMENT_TOKEN_TO_BE_REPLACED

What I Learned by Teaching Hebrew to Asylum Seekers in Israel

When my friend Heidi Gleit asked last summer for volunteers to teach a weekly Hebrew reading-and-writing evening class to Eritrean and Darfurian asylum seekers in the Israeli town of Lod, I agreed immediately.

END_OF_DOCUMENT_TOKEN_TO_BE_REPLACED

Why I’m Inviting an Asylum Seeker to My Seder

At every Passover seder of my childhood, my father Gershon Glausiusz would break the middle matzah, as the Haggadah instructed, place one half in an embroidered bag, and fling the bag over his shoulder, saying, “This is how we carried our possessions when we went into exile.” He was talking of his own deportation…

END_OF_DOCUMENT_TOKEN_TO_BE_REPLACED

Opinion | Should Israel Deport African Asylum Seekers? | Yes, It Should

We need to bear witness to the Talmudic dictum, “The poor people living in your own city come first.”

END_OF_DOCUMENT_TOKEN_TO_BE_REPLACED

Let’s create forward-thinking models—and ambassadors of light from Israel to the world.

END_OF_DOCUMENT_TOKEN_TO_BE_REPLACED

Letter From New Haven: A Syrian Family in Trump’s America

On election night, a group of Jews welcomed a Syrian family. Now they wonder what to say when the refugees ask: Will we be safe here?

END_OF_DOCUMENT_TOKEN_TO_BE_REPLACED

Opinion // Why Sodom Was Destroyed

Religious Jews should be first in line to help today’s refugees and strangers.

END_OF_DOCUMENT_TOKEN_TO_BE_REPLACED

Opinion // Declaring the Rights of Migrants

Refugees are flocking to the European continent in ever-growing numbers, and Europeans show increasing resistance to accepting them.

END_OF_DOCUMENT_TOKEN_TO_BE_REPLACED

What is our responsibility as Jews toward Syrian refugees?

END_OF_DOCUMENT_TOKEN_TO_BE_REPLACED

2015 November-December, From the Editor

From the Editor // November/December 2015

Facebook Twitter Pinterest linkedin Telegram
During the Rwanda genocide, I thought about taking in a Tutsi family or adopting an orphan. But I had a baby and a job, I was writing a...