Sex, Love and Judaism Intertwine in ‘Love Me Kosher’ Exhibit

What the average person thinks about when they think about Judaism and sex can be deduced from these three headlines from a cross section of Jewish publications: “Myth: Religious Jews have Sex through a Hole in a Sheet,”“Do Orthodox Jews Have Sex Through a Sheet?” and “Nobody Has Sex Through A Hole In The Sheet.” In discussing Judaism and sexuality, “one quickly and inevitably encounters clichés about Orthodoxy,” Danielle Spera, the now-former director of the Jewish Museum Vienna, observes. What her rapturous final exhibition, “Love Me Kosher,” seeks to contend is that love, sex and relationships are central to and inseparable from Judaism—that “lust and passion do not contradict faith.”

Walking into “Love Me Kosher” is to enter a mystical paradise of flowers and birdsong evoked by Viennese artist and renaissance man André Heller’s fantastical paintings, which are inspired by Anima, the gardens he designed near Marrakesh, Morocco. It’s a fitting entry, given that at the world’s conception, the injunction came down to “be fruitful, and multiply, and replenish the earth.” Sex—at least in the heterosexual, procreative sense—was seen as being central to the bond between men and women (in the context of a monogamous union). In casting Eve from one of Adam’s ribs, God said, “It is not good that the man should be alone.” 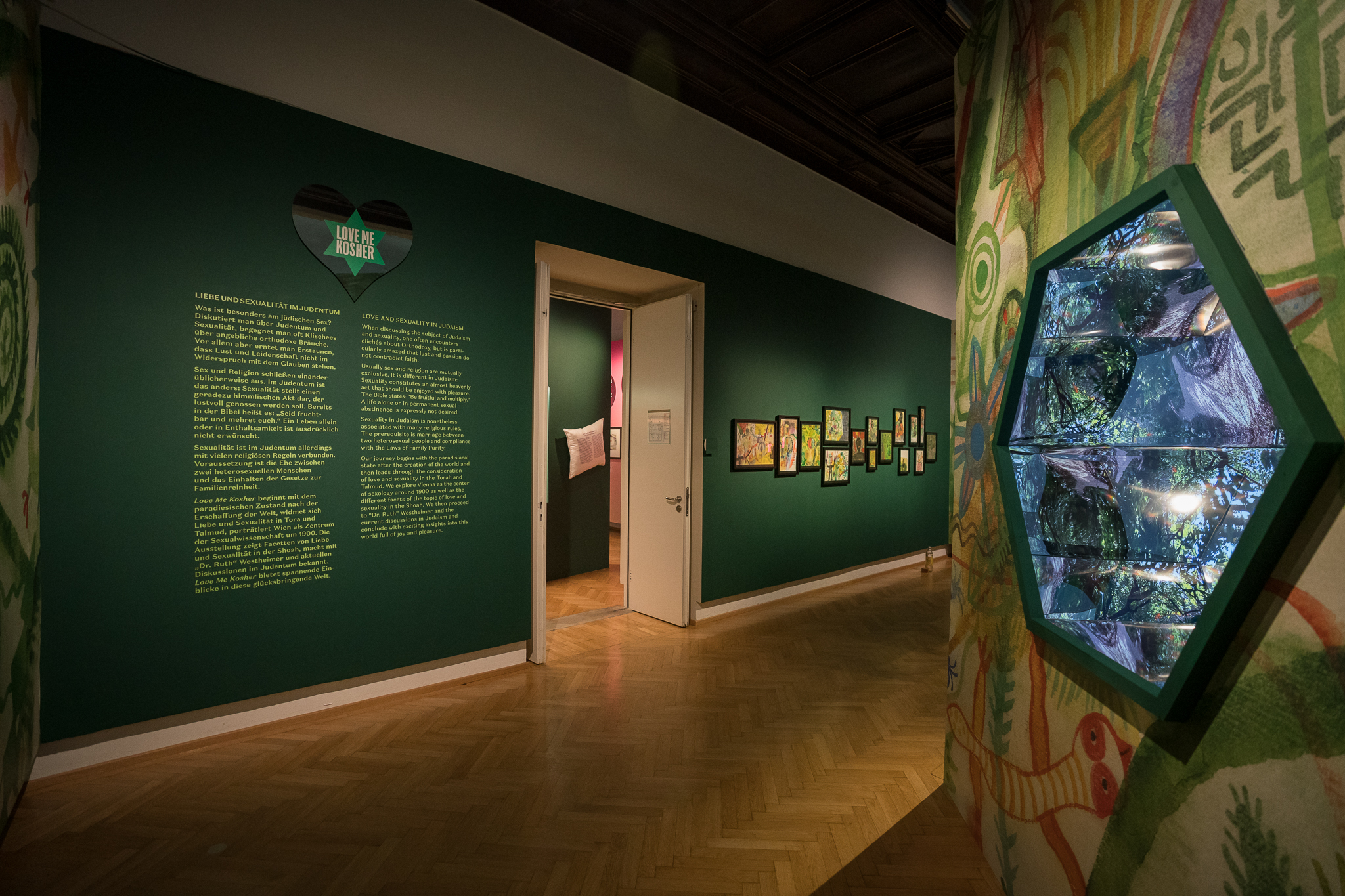 Curated by Spera, Daniela Pscheiden and Julia Windegger, “Love Me Kosher” takes visitors through themed areas, beginning with the Torah. There is indeed an onus on reproduction in the texts, but pleasure and the erotic are by no means limited to Dr. Ruth’s Game of Good Sex (which is to be found further on in the exhibit). Consider the sensuality of the “Song of Solomon,” which Spera quotes in the exhibition’s catalog—“let him kiss me with the kisses of his mouth: for thy love is better than wine.” Or the ethereal beauty of the biblically inspired paintings of the Viennese Jewish artist Arik Brauer, whose works depict some of the Bible’s villains as temptresses—such as Potiphar’s wife, who falsely accuses Joseph of attempted rape after he flees her sexual advances, and Delilah, betrayer of Samson. The juxtaposition between the Bible’s songs celebrating love and intimacy and its strictures becomes even clearer later in the exhibition.

In the Viennese context in which “Love Me Kosher” is grounded, what comes across is not merely the centrality of love, sex and procreation to Judaism but the relationship between sex and power. Prior to 1421, marriages took place more or less freely in Vienna’s Jewish community. Then came the Vienna Gesera (the expulsion of Jews from Austria), for centuries after which the right to settle in the city was limited to so-called “tolerated” Jews useful to the monarchy. Under these conditions, marriage became a tool for cementing alliances and financial and professional relationships between Jewish families. It wasn’t until the first decades of the 20th century that Vienna became synonymous with Freudian psychosexual analysis and a certain sexual joie de vivre—depicted in the exhibit by advertising and movie posters from the period.

In the room dedicated exclusively to wedding ceremonies—including a selection of photographs from Spera’s own 1994 wedding to the politician Martin Engelberg—stands a chuppah. This particular one, with its faded blue canopy, was donated by the American Jewish Joint Distribution Committee (JDC) in 1945 and used to conduct marriages in displaced persons camps after World War II. It is a reminder that both during and after the Holocaust, love and marriage had another meaning: survival. 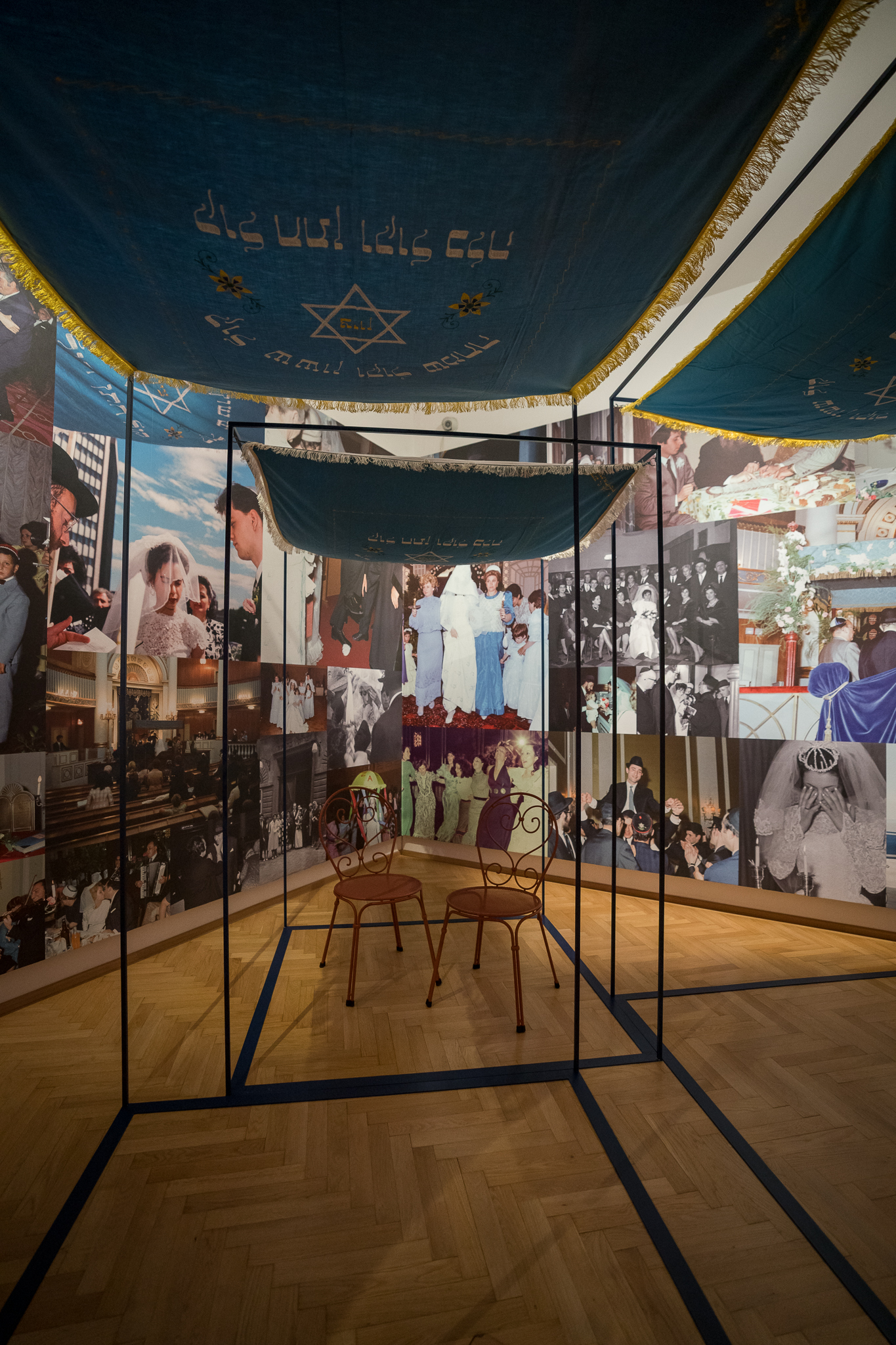 Indeed, the Holocaust was an inversion of everything, including love, sex and relationships. The Nazi Nuremburg Laws forbade sexual relations and marriage between Jews and non-Jews, viewing miscegenation as Rassenschande, or racial defilement. Jews were depicted in Nazi propaganda as loose and lecherous, and, as in the notoriously antisemitic movie Jud Süß (Süss the Jew), a danger to Christians (or Aryans) of the opposite sex. Though there were love stories in the concentration camps, “Love Me Kosher” makes clear through oral testimonies that the Nazis used sex above all as a tool of violence, oppression and humiliation that further entrenched the power imbalance between prisoner and guard, Aryan and Jew.

The exhibition’s final rooms bring the discussion of love and sexuality up to the present. On one wall hangs a rather large and arresting image taken by the Berlin-based Jewish photographer Benyamin Reich, whose work is featured throughout the exhibition. “Chasidim in Love,” taken in 2018, depicts two young, ultra-Orthodox men wrapped in nothing but a single prayer shawl draped suggestively off the shoulder of one of them. The photograph is at once innocent and subversive. Its contrasts give form to how those aforementioned conflicts in the texts—the distance between Leviticus and the “Song of Songs”—are playing out in contemporary Jewish communities. 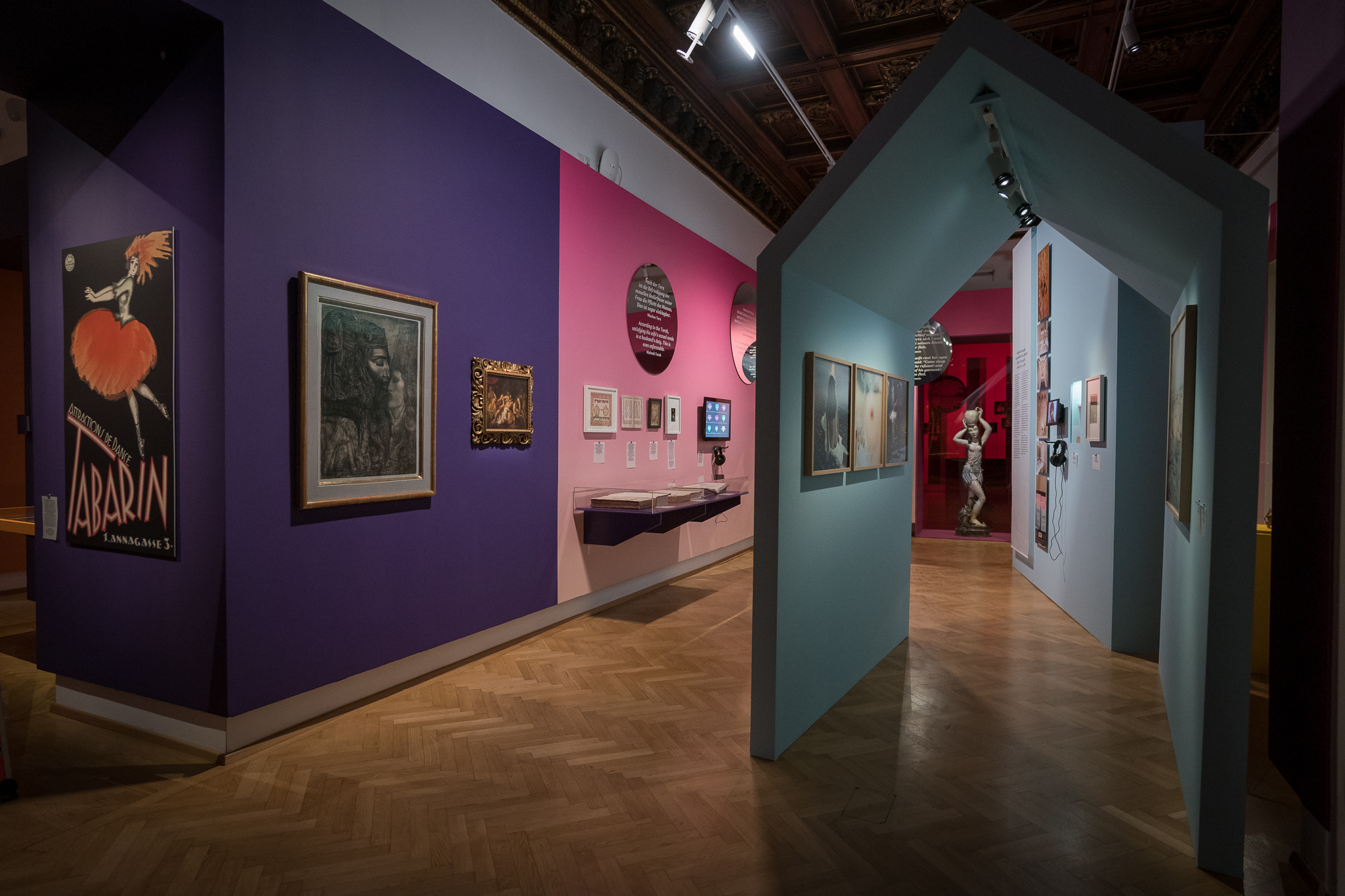 “Love Me Kosher” does not delve into the sexual underground of Hasidic Jewish life detailed by those who have gone off the derech (path) and left ultra-Orthodoxy. Rather, the exhibition looks at how queer Jews in Vienna have felt excluded from the mainstream of Viennese Jewish life, which is very much shaped and informed by religious orthodoxy. The gallery of posters from the Kibbutz Klub, a dance party series organized by the LGBTQ network Queer Hebrews, which seeks to bring Tel Aviv’s fun and socially liberal atmosphere to Vienna, is one example of how LGBTQ Jews in Vienna have had to find or form alternative outlets through which they can express their Jewish identity. 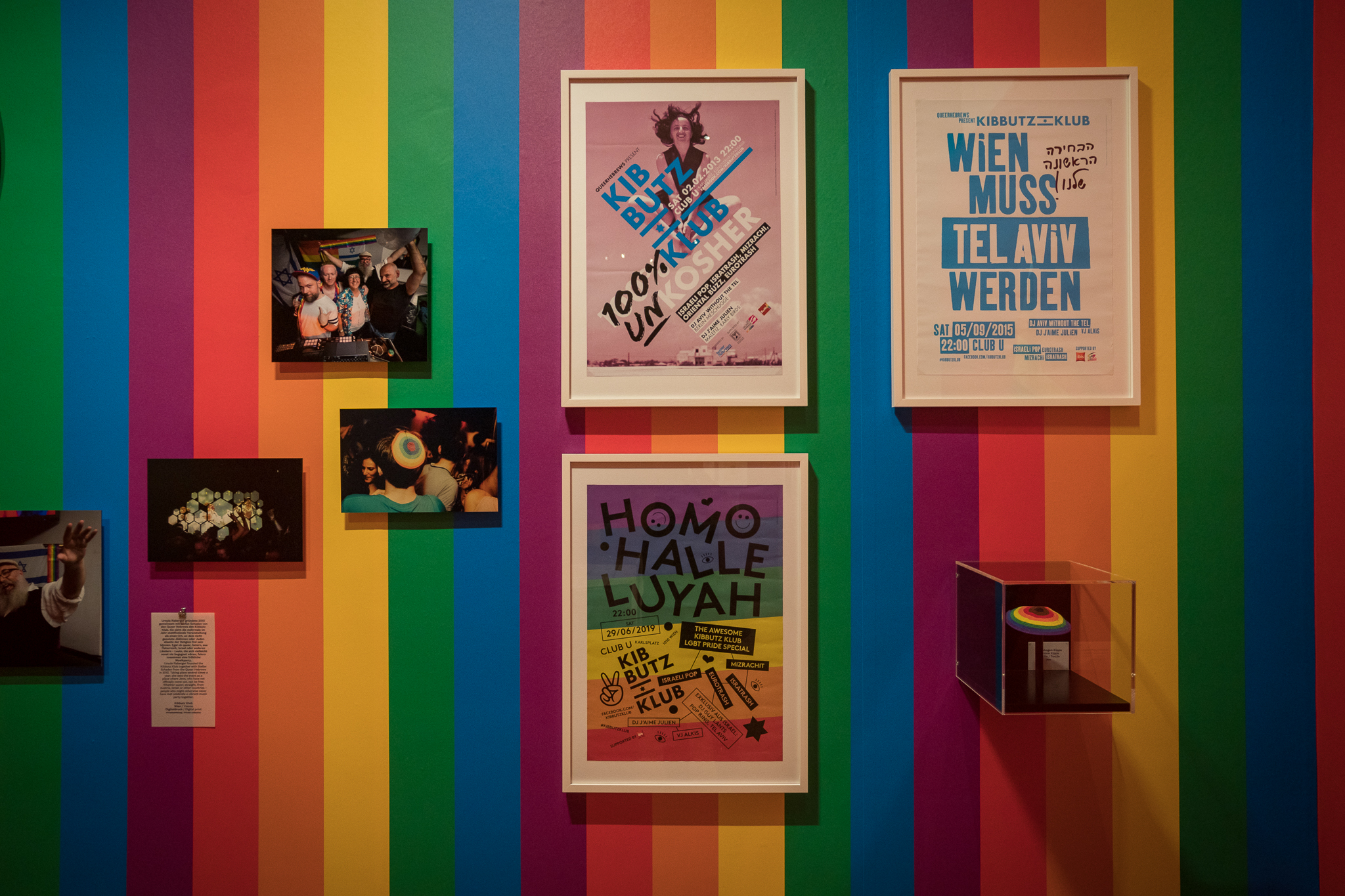 In showcasing the centrality of love and sex in Judaism, “Love Me Kosher” artfully emphasizes this evolving relationship throughout Jewish history—from procreation to power to self-expression.

“Love Me Kosher” is on view at the Jewish Museum Vienna until November 13. The exhibition’s playlist (including Elvis’ “Love Me Tender”) is available on Spotify.

Jewish and LGBTQ Communities Stand Together Against Club Q Shooting

Aside from her pastoral responsibilities, Aviv, as one of the few lesbian rabbis in Colorado, feels this tragedy on a personal level.

END_OF_DOCUMENT_TOKEN_TO_BE_REPLACED

The Future of Berlin’s Jewish Museum

With a new core exhibition and a new director, the Jewish Museum Berlin hopes to overcome past controversies and make the museum a space for people of all backgrounds to engage with the history of Jewish life in Germany.