Rhodes, island of sun, beaches and tourism, resting in the south Aegean near Turkey. Rhodes, site of the Colossus, one of the seven wonders of the world. The old medieval town, a UNESCO World Heritage City, with its Palace and Street of the Knights, its small winding labyrinthine alleys and countless tourist shops and restaurants. Among the maze of streets is the area still known as “la Juderia,” the Jewish Quarter, once a thriving Jewish community. But a community that existed in the old town for 2,300 years was nearly wiped out in a single day: July 23, 1944.

On a plaque next to synagogue Kahal Shalom, you peer at the list of deportees to Auschwitz; Sephardic names like Ventoura, Nahmias, Beneviste continue today in the names of their descendants, known as “Rhodeslis,” many who come every year to Rhodes to meet each other, renew friendships and honor the memory of the Jewish community. This year, the 75th anniversary of the deportation of the Rhodian Jews, a number of activities were planned, including a kaddish service on July 21, followed by a wreath laying ceremony at the Holocaust memorial at the Jewish Martyrs Square. 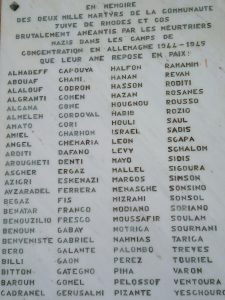 Rabbi Gabriel Negrin, of the Jewish community in Athens, led services in the one remaining synagogue—also the oldest in Greece. Built in 1577, Kahal Shalom has beautifully decorated arches, chandeliers and a black and white mosaic floor. Visitors from all over the world spilled out of the synagogue into the sunny courtyard, and you could hear voices in Italian, French, Greek and English. Inside, speakers from the state, diplomats and Greek Jewish community representatives all stressed the importance of unity and keeping memory alive. “Never again” is also stressed in the text of the six-sided Holocaust memorial—unveiled in 2002, thanks to the efforts of Rhodes Jewish community president Bella Restis—in the languages of French, Italian, English, Hebrew, Greek and Ladino. 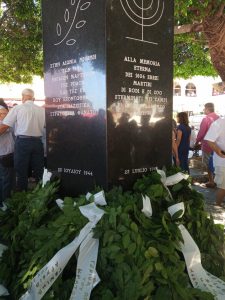 Wreaths at the Holocaust memorial

In a week of emotional ceremonies, including a silent march on July 23 from the Jewish Martyrs Square to the port and a speech by survivor Sami Modiano, two of the week’s most emotional moments involved music. One was in the synagogue when the congregation softly joined in singing “Hineh ma tov u’ma na-im shevet achim gam ya chad” (How good it is for brethren to dwell together in unity”). Another was at the Holocaust memorial with “Adio Kerida,” a Ladino song of love and suffering. Songs had been an integral part of the community; if you walked through “la Juderia,” you could hear the women going about their chores singing traditional Ladino songs. 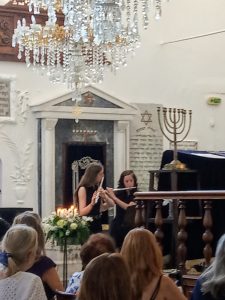 Mention of Jews in Rhodes was noted back in Maccabean times in the 2nd century B.C.E., and their numbers and position rose and fell in the succeeding centuries. According to the community website, an Italian rabbi visiting Rhodes in 1467 wrote, “I have never encountered a Jewish Community in which everyone, from the eldest to the youngest, is so intelligent they have long hair and look like princes. The Knights of Hospitalers of Rhodes visit the Jewish homes regularly to admire the beautiful embroideries.” The militant Knights, who ruled Rhodes from 1309 to 1522, left their mark more than other invaders, fortifying the town against the Ottomans, who finally managed to conquer the island and held it for 400 years.

The Romaniotes, the original Jews, were assimilated into the customs and language of the Sephardic Jews who arrived in Rhodes after their expulsion from Spain in 1492. The community reached its peak around the end of the 19th century when there were six synagogues and a Jewish school as well as a yeshiva, and Jewish merchants took an active part in commerce of the old town. In 1913 the Italians took over the island until they gave it to the Germans in 1943. During Italian racial laws of the 1930s, Jews started emigrating to countries in Africa, and to the United States (where sizable communities of Rhodian Jewish descendants settled in Los Angeles and Seattle). The Jews that remained behind in Rhodes perhaps felt and hoped that, compared with the terrible events in the rest of Greece and Europe, their life would be left undisturbed, living as they were far from the mainland, close to Asia Minor. But this illusion shattered in the roundup and the long nightmarish transport to Auschwitz, ironically one of the last of the war. In 1946 the island became part of Greece. 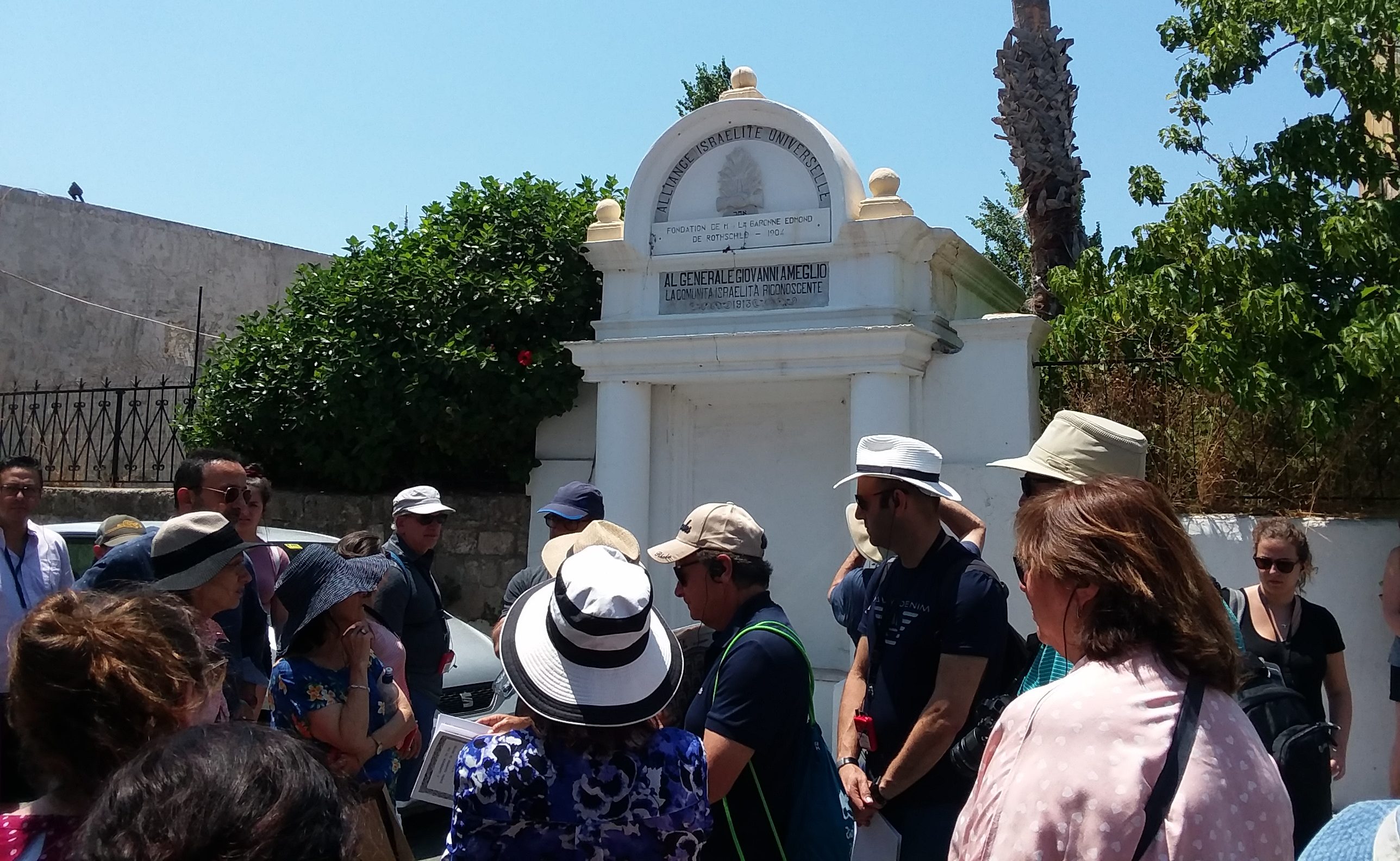 Today, history is preserved in the Jewish Museum, the former women’s area of the synagogue, and in walking tours of the area given by Isaac Habib, whose Rhodian mother was one of the 150 survivors (120 men, 30 women). Raised in South Africa, Isaac is proud and passionate about the Rhodes Jewish community. No one seems to know more about “la Juderia” and the stone inscriptions in Italian, French, Ladino and Hebrew that he points out to visiting groups.

Some commemoration ceremony participants, spending a week touring Rhodes, mentioned they hadn’t previously known anything about Jewish Rhodes, and learning about the history of this once vibrant Sephardic community was both educational and moving. American Jews tend to focus on the Ashkenazi Eastern European experience in the Holocaust and ignore what occurred in Southeast Europe. Rhodes, this former oasis of Ladino speaking Jews, is nearly invisible. Today, although there are only a handful of Jews living in the old town, the memory of this community is actively kept alive by their descendants the Rhodeslis, “small in number but large in heart,” as one speaker put it at the kaddish service, who are determined to never forget and, as another speaker put it, “not only to remember, but to celebrate life.” That is indeed the victory.

END_OF_DOCUMENT_TOKEN_TO_BE_REPLACED

14 thoughts on “On the Island of Rhodes, Marking 75 Years Since the Jewish Deportation”