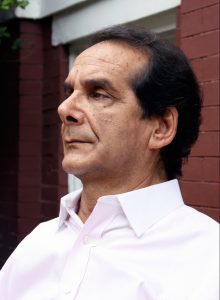 I first knew Charles Krauthammer when I was a wet-behind-the-ears New Republic intern and he was a rising eminence, a scary and impressive senior editor (I think he was 34 at the time) just starting to attract national recognition. In the office, intimidated by his intellect, I barely had the nerve to speak to him. A month or so into my tenure, though, at a cocktail party thrown for the staff in editor Michael Kinsley’s downtown apartment, I found myself having a mild argument with Charles about Israel. I don’t remember the details, only that I proclaimed at some point with twentysomething arrogance that I would never dare opine about Israel without going there and seeing it for myself. As the words left my lips, I was overcome with embarrassment: Plainly, this man in the elaborate motorized wheelchair was not about to hop on a plane.

I saw him notice my discomfort, then politely sidestep it. But a bit later, when the party was breaking up, he came up to me and asked if I would like a ride home. I had no idea how he proposed to drive me home, but I wasn’t about to commit another stupid gaffe, so I said yes. And so I got to ride in Charles’s magic van, a wonder of technology that allowed him to drive it with only the movement of a few fingers of his right hand propped in a brace. I got the message: Only an idiot would think of condescending to Charles, ever, about anything; and under no circumstances would he ever be anything but gracious.

It’s that graciousness, Charles’s fundamental generosity of character, that emerges as a theme in all the tributes being published this week after his death at 68 from cancer and a year-long cascade of medical complications. And it is one reason why so many people who disagreed with where he ended up politically—me included—routinely and instinctively set it aside in our feelings about him, in a way that’s become almost unheard of in today’s tribal political culture. There were so many aspects of Charles that stood outside politics: his passions for chess and baseball, his support for Jewish music and Jewish education. He was a major backer of the text-based Hebrew high school program Shoresh and, more surprisingly, a fan of Georgetown Day School, which his son attended, a school known for its liberal politics. (I called him for advice before sending my own kids there; he observed, with customary wit, that a certain trio of prestigious DC private schools represented “the three major denominations of American Jewry: liberals, Quakers and Episcopalians.”)

When Charles published his farewell column on June 8, saying that his doctors had told him he had only weeks to live and that “my fight is over,” you could watch the push and pull in real time as the near-vanished mode of honorable mourning—focusing on one’s regard for a human being, not one’s take on his opinions—washed back and forth against the customary online modes of name-calling, political moralizing and furious dismissiveness. In the Washington Post comment section, which is moderated, reasonable decorum prevailed, with only about one in 20 commenters, I reckoned, taking a slap. Many noted the pleasure and challenge of reading and disagreeing with Charles’s column every Friday; many more noted, with telling astonishment, the degree to which others were also taking the high road.

On Facebook, of course, things were looser. On one journalist’s feed, mostly filled with outpourings of grief and affection, a regular commenter (presumably, known to the group) found it necessary to shift modes, offering a barb about Charles’s views on health care. Would things deteriorate? On the contrary, another regular responded with surprising gentleness: “Maybe keep in mind that the people mourning here knew him as more than a byline.”

Just for a moment, the exchange laid a cooling finger on my grief. How Charles would have loved the idea that he was elevating the discourse, even online, even about himself.

END_OF_DOCUMENT_TOKEN_TO_BE_REPLACED

When Akiva Weisinger started the Facebook group “God Save Us From Your Opinion: A Place For Serious Discussion of Judaism” in 2014, he viewed it as a place for “me and a couple of friends to discuss Judaism,” the 27-year-old teacher recalls.

END_OF_DOCUMENT_TOKEN_TO_BE_REPLACED

What Do Memes Tell Us About Jewish Identity?

END_OF_DOCUMENT_TOKEN_TO_BE_REPLACED

In 1987, the editors of the Israeli weekly newsmagazine Koteret Rashit marked the 20th year of Israeli control of the West Bank and the Gaza Strip by dispatching the young, up-and-coming novelist and journalist David Grossman to spend seven weeks among Palestinians and Israeli settlers living in the West Bank.

END_OF_DOCUMENT_TOKEN_TO_BE_REPLACED

Israel Still Has the Power to Change

Facebook Twitter Pinterest linkedin Telegram
By Scott Fox The beginning of 2012 means the nearing of elections in Israel and the United States. In both, incumbents have surprising...

END_OF_DOCUMENT_TOKEN_TO_BE_REPLACED

Israel and the Left

END_OF_DOCUMENT_TOKEN_TO_BE_REPLACED

After Giffords Attack, Searching for Compassion

END_OF_DOCUMENT_TOKEN_TO_BE_REPLACED

Jews In the Media on Jews In The Media

Facebook Twitter Pinterest linkedin Telegram
By Ben Goldberg CNN anchor Rick Sanchez was fired last weekend after calling Jon Stewart a “bigot” and saying that CNN and most of the...