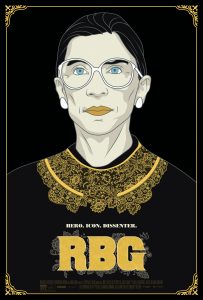 In the past few decades, two pop culture icons have earned the epithet “the Notorious.” The first was one of the best-selling rap artists of all time, a man who set the tone of hip-hop for decades to come before he was killed by anonymous assailants in a drive-by shooting. The other is an 85-year-old, 5’1” Jewish scholar behind whose glasses lies arguably one of the most powerful legal minds of this century.

Supreme Court Justice Ruth Bader Ginsburg was the topic and namesake of this spring’s surprise blockbuster movie RBG. A CNN-produced documentary in an era of superhero films, it grossed over $13 million and was the 10th most successful film at the box office for three weeks. It received a 93 percent “certified fresh” rating on Rotten Tomatoes and “generally favorable reviews” on Metacritic. Documentaries rarely fare so well; after just a few weeks in theaters, RBG secured the title of being the 16th most successful documentary of this decade. 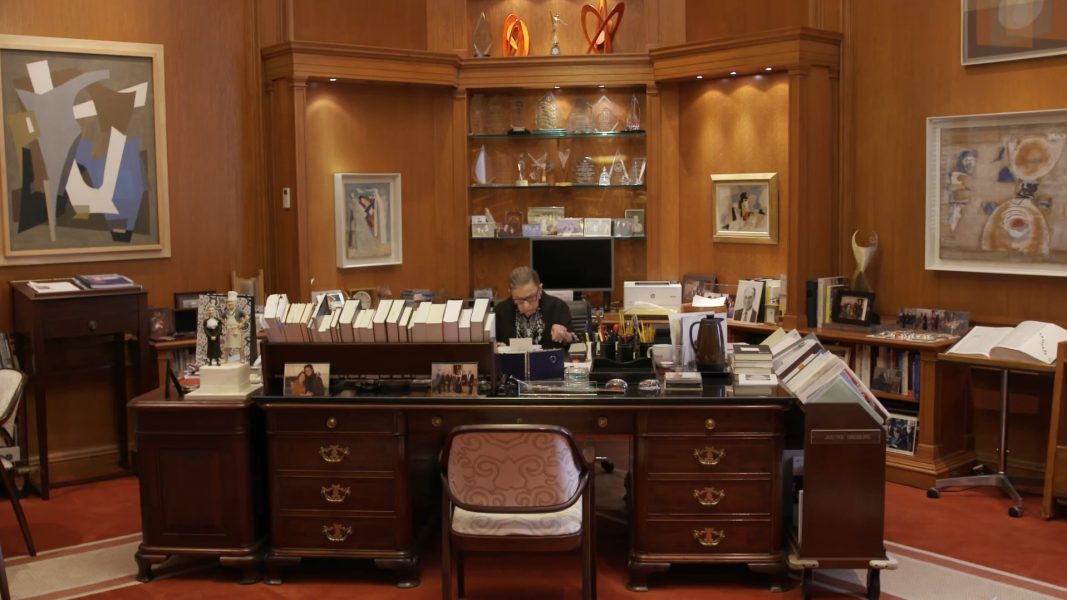 The movie’s success is impressive considering the heavyweight competition it stood up against, including Avengers: Infinity War, which busted records to become the fourth highest grossing film of all time, and Solo, the next installment in Disney’s continuation of the Star Wars franchise. Nonetheless, driven by the justice’s popularity, millions of moviegoers chose to spend their time and money on a documentary about an octogenarian scholar instead of the next superhero flick. The producers of Won’t You Be My Neighbor saw a similar surprise success with their own documentary about Mr. Rogers, a children’s television icon who taught children for decades about compassion, which hit theaters around the same time as RBG.

The key to these documentaries’ successes: their subjects’ universal acclaim. Both Ginsburg and Rogers made their mark inspiring young people, leading a whole generation to revere both as symbols of kindness and camaraderie. When offered the chance to peer backstage into their lives, then, millions of fans took it. Vulture describes the audiences to her speeches as “visibly overwhelmed, seeming to lean back in awe even as they lean forward to hear their superhero (Gloria Steinem’s word) answer questions and read from her momentous arguments, majority opinions, and dissents.”

In the past decade, Ginsburg has become an icon among liberals, especially millennials. Her online fame was boosted in 2013 when NYU law student Shana Knizhnik created the Tumblr blog “Notorious R.B.G.” in response to Ginsburg’s fierce dissent in the case Shelby County v. Holder, which struck down sections of the Voting Rights Act of 1965. Fanmade artwork using the new nickname began to quickly spread across the Internet. Young liberals idolized her, inspired by her support for gay marriage and women’s rights. The same young people inspired by Barack Obama’s messages of “hope” and “change” came to rest their faith in Ginsburg as her clarion call voice dissented against the majority conservative court. She even inspired a Jewish blogger to write a prayer for her longevity. 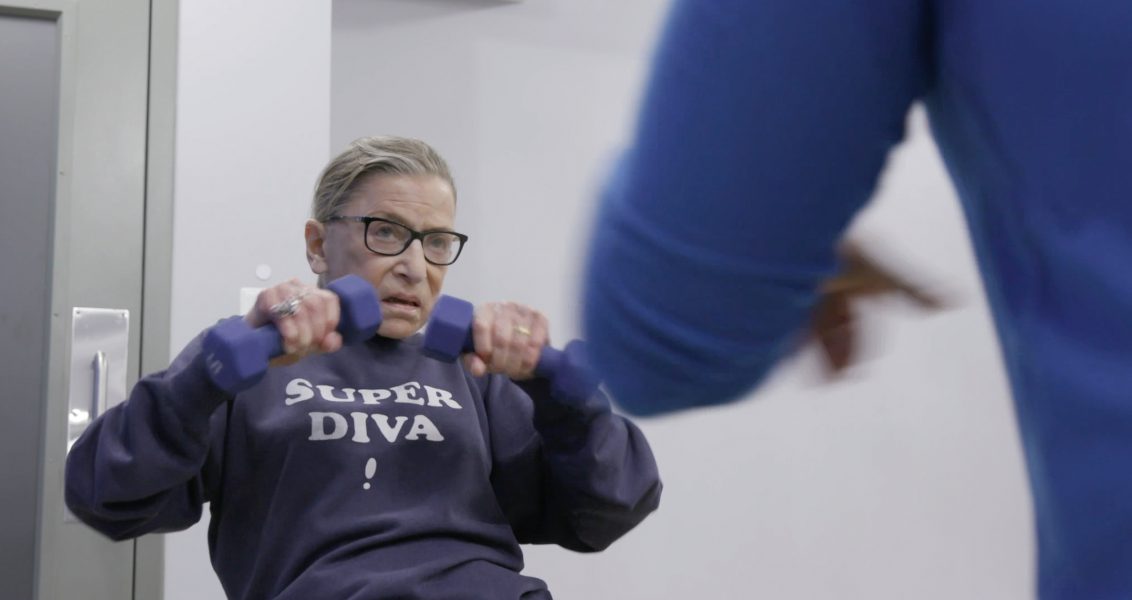 A few years after her blog took off, Knizhnik teamed up with Irin Carmon, an Israeli-American journalist at MSNBC, to publish the biography Notorious RBG: the Life and Times of Ruth Bader Ginsburg. The book and its authors were heavily featured in the film RBG, which tells the story of Ginsburg’s life from her birth in Brooklyn through her transformation into the most recognizable face on the highest judicial bench in the country. The film is interspersed with interviews of family members, friends, political figures (including former President Bill Clinton) and Justice Ginsburg herself.

Ginsburg recalls to the camera two childhood lessons from her mother that she carried with her through adulthood: “Be a lady and be independent.” In that vein, the titular justice politely but powerfully fought time and again against sexism and gender stereotypes. When she enrolled at Harvard Law School in 1956, Ginsburg was one of only nine women in a class of over 500 students; the dean of the college then demanded to know why she and the other female students “took” their spots from a qualified man. Later, despite graduating at the top of her class from Columbia, she struggled to find a law firm that would hire a woman, and when she finally was hired, her salary was considerably lower than that of her male peers. Her husband Marty Ginsburg was, in her words, “the first boy I ever knew who cared I had a brain.”

After working for a few years in academia at Columbia and Rutgers, Ginsburg was pushed by her firsthand experiences of gender discrimination to begin her lifelong fight for women’s rights as a lawyer with the ACLU in the 1970s. RBG constructed a firm, steady defense of gender equality one case at a time. She argued six such cases before the Supreme Court and won five of them, including one that struck down a law denying widowers the same entitlements as widows. Facing an all-male bench, Ginsburg shrewdly selected cases that demonstrated the dangers to both men and women of permitting discrimination as she gradually constructed an impenetrable defense of gender equality. A major obstacle was making the men in power aware of gender discrimination, which many had not even previously considered. It was not until her victory in Reed v. Reed (1971), for example, that the Equal Protection Clause of the Fourteenth Amendment was expanded to protect women and not just racial minorities.

Once on the Supreme Court, the film shows Ginsburg as a more moderate, compromising voice, befriending conservative incendiary Antonin Scalia and generally siding with the majority. It was not until George W. Bush’s presidency, RBG argues, that the addition of more conservative voices to the bench made Ginsburg the liberal superstar that she is today. According to Time, Bush v. Gore, the case that ended the 2000 election and effectively made George W. Bush president, “marked a turning point for Ginsburg, who had previously been known as a restrained moderate” but was pushed to the left when President Bush added conservatives John Roberts and Samuel Alito to the court.

Throughout the film, Ginsburg is portrayed as a quiet, somber woman, the yin to her goofy husband Marty’s yang. Her generally reserved demeanor provides a sharp contrast with her image in pop culture as a progressive firebrand. Still, her more personable side shines through at precious moments, like when she laughs at Kate McKinnon’s portrayal of her on Saturday Night Live or when her grandchildren affectionately call her “bubbe.”

By showing her life beyond her judicial work, RBG powerfully humanizes a national celebrity. She may be a brilliant legal scholar, the film tells us, but she was still “banned” from the kitchen by her family because of her horrendous cooking, an anecdote that her children recall with laughter. She also energetically exercises with a personal trainer, wearing a sweatshirt that says “superdiva” while she planks and lifts weights. RBG honestly presents Ginsburg’s successes as well as her struggles, from raising a child while in law school to losing her husband to cancer in 2010.

Such stories humanize Ginsburg and fuel her celebrity among the next generation of liberals. Bubbes take heart: As RBG’s surprise success shows, even grandmas can become popular among young people with a little chutzpah and a lot of memes.

END_OF_DOCUMENT_TOKEN_TO_BE_REPLACED

Opinion | The Case Of The Praying Coach

Late last term, the Supreme Court decided a case that fundamentally transformed the relationship between church and state.

END_OF_DOCUMENT_TOKEN_TO_BE_REPLACED

Well before the start of the COVID-19 pandemic, Israeli artist Keren Goldstein created the art installation She’s Gone which features the clothing of Israeli murdered victims of intimate partner violence. Goldstein and She’s Gone co-director and designer Adi Levy, along with Rachel Louise Snyder, award-winning author of No Visible Bruises, are in conversation about why assaults against women have been recorded in greater numbers worldwide since the start of the pandemic, what can be done about it and how the exhibit She’s Gone is protesting the global phenomenon of gender-based murder performed by spouses and other family members. Dr. Shoshannah Frydman, Executive Director of the Shalom Task Force shares how the Jewish community is helping to combat and prevent domestic violence and available resources.

This program is sponsored by Moment Magazine and is in partnership with The Moment Gallery, Remember the Women Institute, She’s Gone, Strongin Collection and in cooperation with the Embassy of Israel.

END_OF_DOCUMENT_TOKEN_TO_BE_REPLACED

High Court in the Hot Seat

I am more worried than I have ever been about the future of Israel,” says attorney Dorit Beinisch, former president of Israel’s Supreme Court, as well known in Israel as the late Justice Ruth Bader Ginsburg was in the United States.

END_OF_DOCUMENT_TOKEN_TO_BE_REPLACED

A Wide Open Conversation with Esther Wojcicki and Nadine Epstein