Opinion // The Shot Heard Round the World 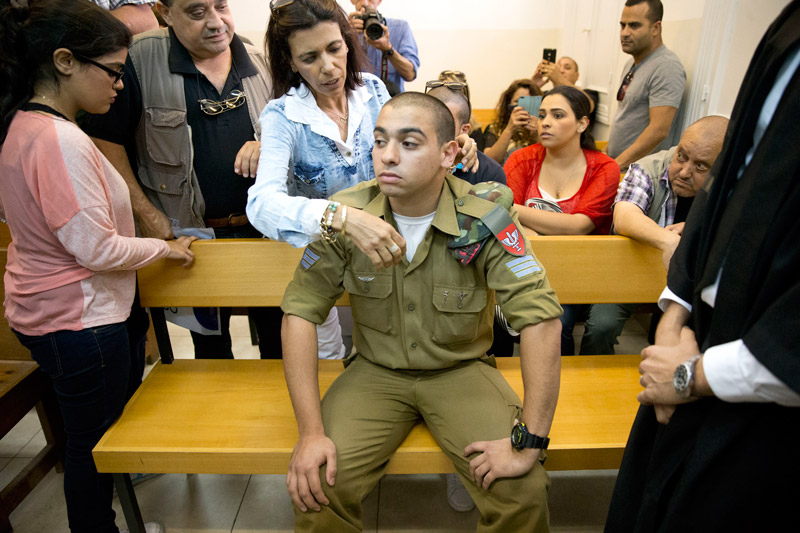 Opinion // The Shot Heard Round the World

The Israeli soldier who “neutralized” a terrorist is not the true villain.

It happened in March, on our silliest, most joyous holiday, Purim. Two Palestinian terrorists walked into the Jewish enclave in Hebron, took out knives and stabbed a soldier. One terrorist was killed; the second lay on the ground twitching until an Israeli soldier, initially referred to as Sergeant A and later identified as Elor Azaria, calmly shot him in the head. The controversial NGO B’Tselem, well known for its fostering of anti-Israel propaganda, filmed the incident, then uploaded it to the Internet.

It made ugly viewing.

Unsurprisingly, Israel’s critics had a field day. Based on the video alone, the UN’s so-called Middle East peace envoy Nickolay Mladenov judged it a “gruesome, immoral and unjust act,” while U.S. Senator Patrick Leahy (D-Vt.) called for an investigation of Israeli human rights abuses and proposed a law to cut off U.S. military aid. Joint List Israeli-Arab MK Ahmad Tibi blamed the death on the “incitement of Israeli ministers and politicians.”

What was spectacularly different, however, was the harsh, uncompromising stance of the Israeli army itself. Head prosecutor of Israel’s Military Advocate General, Col. Sharon Pinchas Zagagi, initially suggested that the soldier be charged with murder and suggested that in shooting the neutralized terrorist “deliberately and without operational justification…he’d proved himself…a danger to others.” IDF Spokesman Brigadier-General Moti Almoz followed suit: “This is not the culture of the IDF, and not the culture of the Jewish people and not connected to military framework in any way.” The condemnations rained down from the top, with Defense Minister Moshe Ya’alon stating clearly: “We act with a steel hand against terrorists and those who send them…Even then, we must not act in violation of our values and conscience…Our power does not only stem from our military capability but, first of all, from our moral strength. This is our duty, to win, and to remain human.”

The average Israeli, however, for whom the IDF and its soldiers are sacrosanct, could not have disagreed more. Some surveys showed that more than 85 percent of Israelis sided with the shooter. Hundreds of demonstrators gathered all over the country to support him, readily agreeing with HaBayit HaYehudi (Jewish Home Party) MK Moti Yogev, who cited recent incidents where wounded terrorists who were thought to have been neutralized then attacked soldiers. “The goal of the terrorist is to die, and I would prefer a dead terrorist to a dead soldier,” he told Army Radio.

Here are the views of an injured veteran, who was caught in the explosion of a 30-kilogram terrorist suicide belt at a Tulkarem checkpoint in 2005 because, as he wrote in an online post, IDF rules of engagement prevented him from killing the terrorist before “ascertaining with complete certainty” he was wearing an explosive device:

“I’m absolutely sick of it…A soldier shoots a terrorist and makes sure he’s dead and the entire media publicizes ‘atrocity photos’ about an ‘execution.’ IDF soldiers don’t execute. They confirm terrorists are neutralized. This soldier made sure a terrorist with the means and intent to murder Israeli soldiers was dead. So before you start blabbing about ‘rules of engagement’ remember that the same rules got my commander Uri killed and myself seriously injured with battle trauma for the rest of my life. This soldier was a hero, and I salute him.”

By coincidence, the same week all this took place, my grandson became an IDF soldier. We sat around watching as he opened the traditional pre-army presents families give to their children before bidding them goodbye as they begin three years of uncertainties, dangers and frightful choices, years made necessary by the unrelenting, merciless war against the Jewish people in their homeland by the basest of men for the most hateful of reasons. He looked so young to me, my grandson. So young. He is a good boy, deeply religious, who’d spent the preceding year in a yeshiva. Despite our family’s concerns, he’d insisted on joining a combat unit and had picked the bomb squad. What did he think about Sergeant A? “I don’t listen to the media,” he said, shaking his head. “They always get it wrong.” Then he smiled, trying on the watch we’d gotten him and opening the Swiss Army knife, counting how many ways he could use it.

Azaria was initially jailed, facing a possible murder charge. He was then ordered released by a military judge, who confined him to an army base and disarmed him while he awaits trial. The judge partially dismissed the military prosecutor’s harsh accusations by saying the facts of the case were “not unequivocal and could be understood one way or the other.” The prosecutor appealed this decision but subsequently reduced the charge to manslaughter. He has since been indicted on that charge.

How do I feel about Azaria? Israel Hayom columnist Emily Amrousi summed it up: “I don’t know if I’d let him go out with my daughter, which doesn’t change the fact that I’m on his side. He’s a soldier, and we’re at war.”

Naomi Ragen is a novelist and playwright living in Jerusalem.