Sarah Posner: If Corporations are people, what’s their religion? 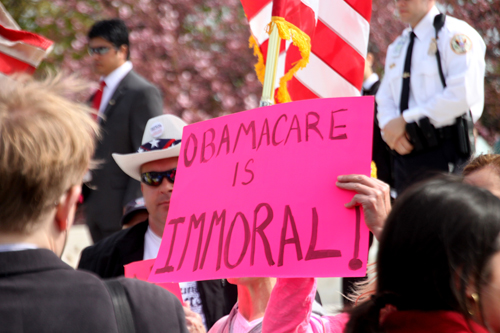 Sarah Posner: If Corporations are people, what’s their religion?

Conservative lawsuits are targeting the Affordable Care Act under the guise of religious freedom.

Coming soon, possibly to the Supreme Court: an argument that under the Court’s decision in Citizens United, corporations have not only free speech rights under the First Amendment, but a religious conscience and the right to free exercise of religion.

This is the latest front in the contraception wars. The chief lawyer for the United States Conference of Catholic Bishops, Anthony Picarello, first hinted at this inventive twist in constitutional law last February, when he complained that “good Catholic business people” would be harmed by the new regulation, under the Affordable Care Act (a.k.a. “Obamacare”), that would require employer-sponsored health insurance to cover contraception free of co-pays and deductibles. “If I quit this job and opened a Taco Bell,” Picarello added, “I’d be covered by the mandate.”

The regulation, a generally applicable rule based on public health policy, exempts houses of worship, a concession to Picarello’s employer’s opposition to birth control. After winning one exemption, the bishops then pushed for a broader one that would include nonprofit religious hospitals, universities and other charities. In response, the Obama administration made an “accommodation,” which will place the onus on insurers—rather than on employers—to provide separate contraception coverage to employees who want it. This, too, proved unsatisfactory to the dozens of Catholic (and evangelical) nonprofits who have sued the Obama administration, hoping eventually to have the issue decided by the Supreme Court.

If this collection of lawsuits seems to push the envelope on what exactly constitutes an infringement of someone’s religious freedom, there’s another batch of them from a handful of for-profit employers. They claim, just as the nonprofit employers do, that the contraception mandate violates their First Amendment rights, as well as the Religious Freedom Restoration Act (RFRA). These private employers, including a Colorado heating, ventilation and air-conditioning contractor, a Missouri mining company and an Illinois Bible publisher, claim that because their businesses are run by deeply religious people, they fall under RFRA’s prohibition against government actions that “substantially burden a person’s exercise of religion even if the burden results from a rule of general applicability.”

Religious exemptions, recognized either judicially or through statute or regulation, are granted to individuals or nonprofit organizations with a religious, charitable purpose. Exemptions from complying with generally applicable laws, such as federal employment nondiscrimination laws, are recognized only for organizations such as churches, synagogues or mosques, an acknowledgment of the legitimate reasons for hiring personnel of one’s own faith in these settings.

Armed with Citizens United, though, for-profit employers are entering the fray. So far, they’ve had mixed results—but we’re only at the beginning stages of what promises to be a protracted effort not only to make corporations people, but to imbue them with spirituality.

In dismissing the claim of O’Brien Industrial Holdings that the mandate posed a “substantial burden” to its religious exercise under RFRA, a federal judge in Missouri noted that the business owner “is not prevented from keeping the Sabbath, from providing a religious upbringing for his children, or from participating in a religious ritual such as communion.” The only “burden” is that O’Brien will contribute to a group health plan that might “subsidize someone else’s participation in an activity that is condemned by plaintiffs’ religion.”

But in the Colorado case, the court granted a preliminary injunction against the enforcement of the Affordable Care Act regulation. In contrast to the Missouri court, the Colorado court found the regulation did substantially burden the company’s religious exercise. The court didn’t address the corporation-with-a-conscience question head-on, but the plaintiffs had argued that, under Citizens United, “First Amendment protection extends to corporations,” and a right under the First Amendment “does not lose First Amendment protection simply because its source is a corporation.”

To be sure, plaintiffs are not limited to devout Catholics. Tyndale House Publisher, a leading publisher of bibles and other Christian books, is arguing in its lawsuit that “the federal government has deemed devout publishers of the Bible to be insufficiently ‘religious’ to enjoy religious freedom in America.” It suggests that not including for-profit companies in the exemption demonstrates just how hostile the government is to religion. Why? Because according to Tyndale, the Bible (specifically Jeremiah 1:5 and Genesis 1:26) says that life begins at fertilization. Therefore, Tyndale maintains, the government must recognize that emergency contraceptives ella and Plan B might (although the Food and Drug Administration and medical experts say otherwise) operate after, rather than before, fertilization, and therefore not compel Tyndale to cover them.

It’s difficult to imagine a more extreme example of the ramifications of the corporations-with-a-conscience claim: that a corporation can claim to know science from the Bible and demand that the government accept that science as a matter of public policy. But if the courts recognize a religious conscience for corporations, the door is open to that possibility, and more.