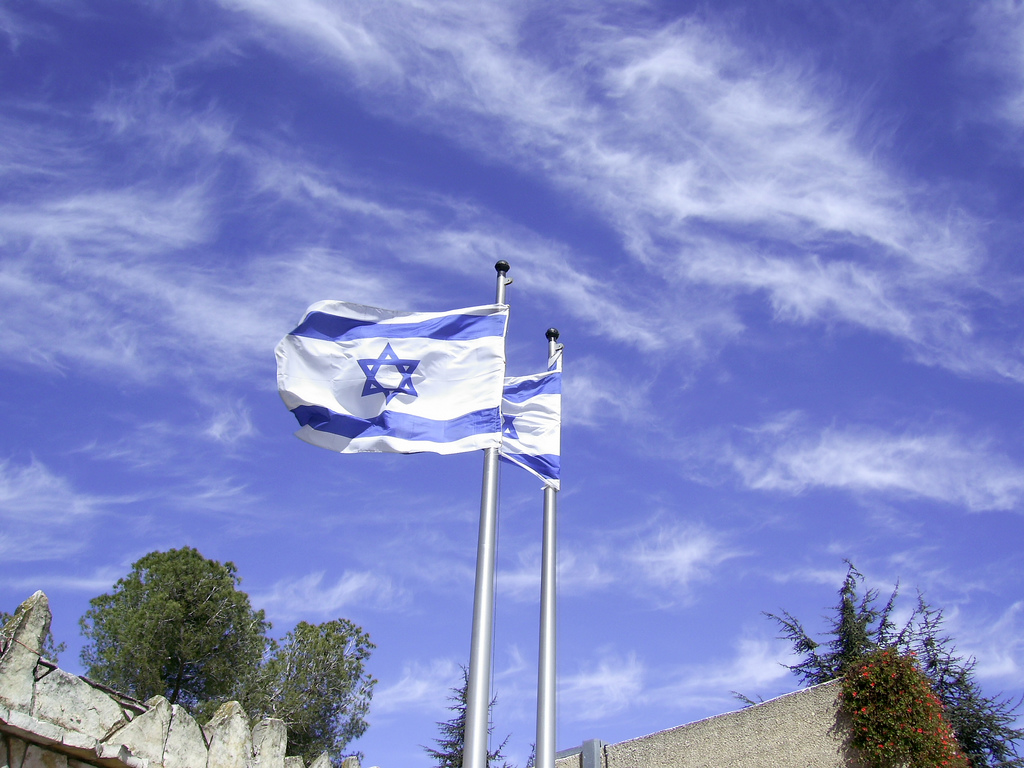 The story goes that in 1954, Israeli Prime Minister David Ben Gurion came to see President Dwight D. Eisenhower at the White House. Upon his arrival, Ben Gurion was first greeted by Secretary of State John Foster Dulles, who challenged the Israeli statesman regarding the Jews’ connection to the controversial sliver of land Ben Gurion had been championing all his life.

“Well,” Ben Gurion is said to have posited. “Say you pick 10 American kids at random and ask them who led their ancestors to this country. How long was the journey and what did they eat? And what was the sea like during their crossing? Chances are most of them won’t know the answers. Now ask 10 Jewish kids who led their people out of Egypt. How long did they wander and what did they eat on their way? And what happened to the sea? Each of them will tell you the very same story.”

Dulles never again questioned the Jewish people’s claim to the land of Israel.

Sixty-three years ago, in 1954, the world understood the Jewish people’s inalienable connection to the land of Israel. Not so today, and especially not on America’s college and university campuses, where progressive factions have developed an alternative narrative that alienates Jews—not only from the Jewish homeland, but from their history, culture and peoplehood.

The international Boycott, Divestment and Sanctions (BDS) movement—supported by such groups as Students for Justice in Palestine, Jewish Voice for Peace, and, “selectively,” J Street U (for goods produced in the West Bank)—trumpets a competing narrative to the one that historians know to be factual. Yet remarkably little questioning of the new “truth” takes place on campus. Instead, popular activist advocates of human rights and Black Lives Matter, as well as a coalition of students of color, have sent Jewish students scrambling to defend their liberal bona fides or be shut out of the progressive causes with which they identify.

How did we arrive at this condition, where the progressive world seems more concerned with the state of affairs in a country the size of New Jersey than about massive Muslim-on-Muslim killings and civil wars across the Arab Middle East?

No doubt the well-funded and well-organized international BDS movement has gained steam by identifying charismatic progressive student leaders on influential college campuses and inculcating them with zippy talking points at all-expense-paid summer institutes.

But the largest streams of Judaism—the liberal streams—are also to blame.

As Israel has gained strength and stature over the decades since its founding, and as assimilation seems to be favored over Jewish particularism in America, Reform and Conservative Jewish education has pivoted to focus on the universal, social justice teachings of Judaism. Tikkun olam (repairing the world) has become the new Judaism.

For several generations, too many Jewish young people have been raised to believe that the extent of their Jewish responsibility is to care for the stranger, the orphan, the widow and by extension, the Palestinian. It can hardly be a surprise that campus Jewish student groups—lauded for their social justice orientation instilled through years of religious school, youth groups, summer camps, high school and college—feel a natural affinity for the Palestinian narrative as it is being served up. They are behaving exactly as we have raised them to behave.

Despite widespread charges that Israel is “occupying” Palestinian land, the fact is that not only all of the land that is current­-day Israel, but also Gaza and the West Bank, is part of the land granted to the Jews as part of the League of Nations Palestine Mandate.

According to Eugene V. Rostow, the late legal scholar and one of the authors of UN Security Council Resolution 242 written after the 1967 war to outline peace negotiations:

the Jewish right of settlement in Palestine west of the Jordan River, that is, in Israel, the West Bank, Jerusalem, and the Gaza Strip, was made unassailable. That right has never been terminated and cannot be terminated except by a recognized peace between Israel and its neighbors, something which Israel’s intransigent Arab neighbors have never seemed prepared to do.

According to Richard L. Cravatts, immediate past president of Scholars for Peace in the Middle East:

The Six Day War of 1967, in which Israel recaptured Gaza and the West Bank, including Jerusalem, resulted in Israel being cast in a … perfidious role – in addition to colonial usurper of Arab land, the Jewish state became a brutal “occupier” of Arab Palestine, lands to which the Jews presumably had no right and now occupied, in the opinion of many in the international community, illegally. But that “unhelpful” view again presumes that parts of the territory that may someday comprise a Palestinian state is already Palestinian land, that the borders of the putative Palestinian state are precise and agreed to, and that Jews living anywhere on those lands are now violating international law.

When did the West Bank, Gaza and East Jerusalem become Palestinian land? The answer is: never.

Yet neither the Conservative nor Reform supplemental schools teach this understanding of Israeli history, nor even the fact that the Palestinians were also offered a state in 1947, but declined.

Confronted by the counterculture of the 1960s, Jewish educators gravitated to tikkun olam and its idealism as part of a larger effort to align the teaching of Jewish values with contemporary concerns. In the 1970s, The Jewish Catalogue became the instruction manual for liberal Judaism, outlining hands-on activities to support society’s underdog. By the end of the 20th century, tikkun olam was widely acknowledged as the central Jewish tenet of Judaism.

Conservative educators also made efforts to reach a greater number of young people through the movement’s youth group, United Synagogue Youth. In 1970, determined to place greater emphasis on social justice as a gateway to engaging more youth, USY leaders revamped and expanded the Building Spiritual Bridges program and renamed it Tikkun Olam. All of its social action programs were coordinated through this project, and in 1975, an accompanying educational guide was published with the same title.

By the 1980s, the journey of tikkun olam into the Jewish educational mainstream was complete when it was promoted as a major Jewish value for religious school curricula by a younger generation of educators active in the Coalition for Alternatives in Jewish Education. By the mid to late 1980s, an increasing number of curricular materials published by the CAJE Curriculum Bank in its publication, Bikurim, were devoted to teaching tikkun olam.

Is it any wonder, then, that in the absence of any substantive education in Jewish history, Jewish millennials cannot see the flaw in the United Nations decree that the Jews have no claim to the Temple Mount—the site of the first and second Temples, and as such, the holiest place in the world for Jews? Or that the disputed territories were acquired in a defensive war? Or that Israeli attacks on schools and hospitals in the West Bank and Gaza are in retaliation for the rockets fired into Israel from those very sites, where Palestinians exploit their own civilian students and patients as human shields? Even the mainstream media covers only the retaliation, failing to surface that the tiny State of Israel is under continual threat.

Moment Magazine cofounder Leonard Fein was fond of saying that “in order to survive, a people needs more than a strategy; it needs a reason.” The secret of the rise of tikkun olam has been its power to give meaning to Jewish identity by reinforcing liberal political and social values already deeply ingrained in the vast majority of American Jews. Most Jews have a vague sense of correlation between their Judaism and their liberalism. Tikkun olam legitimizes it and gave it a name. Tikkun olam promises much and demands comparatively little in the way of sacrifice. This is its greatest strength and, perhaps, its major weakness.

Today, just 16 percent of non-Orthodox American Jewish youth feel connected to Israel, largely because of a failure of Jewish education in the United States, journalist Peter Beinart writes in The Crisis of Zionism. “The American Jewish community is one of the wealthiest and one of the most religiously illiterate Jewish communities in the history of the world,” Beinart writes. “While Jewish education is a priority in Orthodox Jewish communities, its lack of strength among non-Orthodox Jews results in a large young Jewish population that is disengaged with Judaism and/or alienated from Israel.”

Lest there be any confusion about the ultimate purpose of the BDS strategy to demonize Israel, AMCHA, a nonprofit organization dedicated to investigating, documenting, educating about and combating anti-Semitism at institutions of higher education in America, reports:

… the first signatory of the Palestinian BDS Call was the Council of National and Islamic Forces in Palestine, which, according to the Anti-Defamation League, was founded by Yasser Arafat at the start of the Second Intifada in 2000 for the purpose of “organizing a unified effort among major Palestinian factions to oppose Israel and coordinate terror attacks.” The Council includes among its constituent organizations Hamas, the Popular Front for the Liberation of Palestine (PFLP) and PFLP–General Command, all three of which are on the U.S. Department of State’s list of Designated Foreign Terrorist Organizations and are committed to the elimination of Jews and the Jewish state through terrorism and violent means.

The BDS movement advocates punishment of Israel for its “occupation” of Judea and Samaria—both part of the Biblical land of Israel. It invokes the trope that Jews have “white privilege” and the only path to redemption, it seems, is to ignore the facts of history and support “Palestinian rights”—at the exclusion of any other human rights violations around the globe—no questions asked.

The bottom-line goal is normalization of anti-Israel, anti-Jewish sentiment among the next generation of leaders. Just as college graduates understand that slavery and the Ku Klux Klan are abhorrent, so universal condemnation of the Jewish State—and the Jews—is becoming ubiquitous. As UCLA student Arielle Mokhtarzadeh wrote in The Huffington Post:

On both the UCLA and Stanford University campuses, Jewish students seeking roles in the student government have been questioned on the basis of their Jewish surnames and involvement with the Jewish community. These examples expose the true goal of the campus divestment campaign—to graduate the leaders of tomorrow with an entrenched, anti-Jewish bias that they will carry with them into leadership positions in business, government and education.