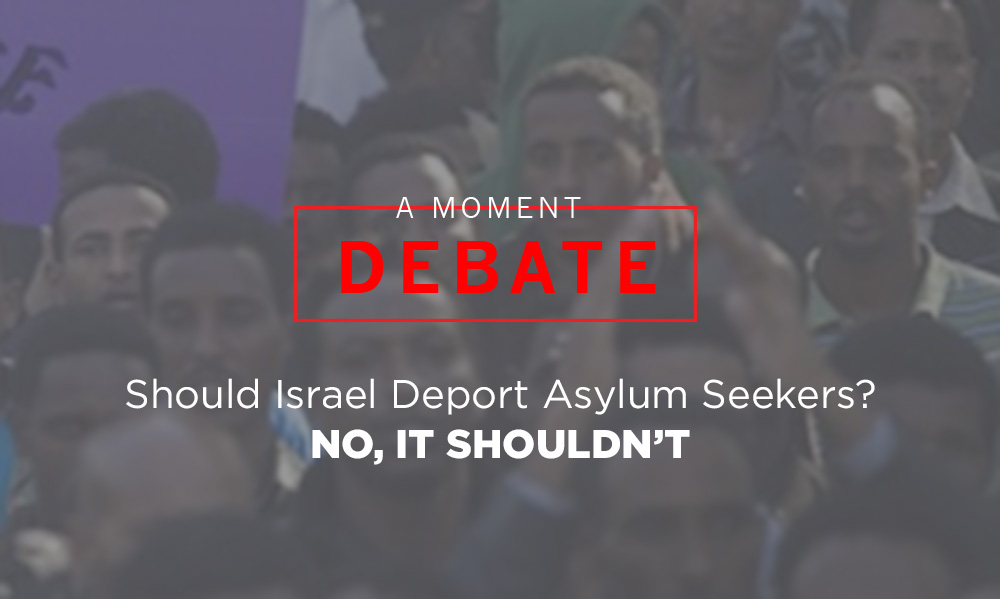 Standing among 20,000 Israelis at the “Stop the Deportation” rally in Tel Aviv recently, I felt my heart fill with pride. Against a rising tide of xenophobia worldwide, Israelis were bucking the hateful trends, demanding that our government end its cruel and un-Jewish policy of jail-or-deportation for African asylum seekers.

Since two rabbinic colleagues and I launched Miklat Israel, the Home Sanctuary movement, we have been overwhelmed by thousands of families who have signed up to hide in their households, if necessary, asylum seekers who otherwise face jail or deportation. These volunteers include Holocaust survivors and children and grandchildren of survivors who call on Israel to fulfill its international obligation to grant asylum under the 1951 Refugee Convention. The young Jewish state championed this convention so that no one would have to live through anything akin to what Jews suffered.

Much as then-candidate Donald Trump insisted that Mexicans were rapists, Israeli politicians have been spreading the basest characterizations of asylum seekers, calling them “infiltrators” and worse. Prime Minister Benjamin Netanyahu, who is threatening the first deportation wave on Pesach, seems to have no sense of irony about sending people to be oppressed, trafficked and enslaved at that season. Nor did he or former Shas leader Eli Yishai seem to notice that they had, on multiple occasions, quoted our biblical anti-heroes.

Like Pharaoh, Netanyahu sought to stoke public fears of a growing “other” among us. Like Haman urging the king of Persia to massacre the Jews, Yishai said they are a separate population in our land who do not follow the law. (According to police, African asylum seekers account for 70 percent of the population of the South Tel Aviv neighborhood Neve Shaanan but are responsible for only 40 percent of the crime, countering reports that they are responsible for a rise in criminal activity.)

It’s heartbreaking that some Israelis and Jews worldwide are falling for the kind of Big Lie tactics and fears that sent the St. Louis back to Europe in 1939. As an empowered state, are we going to follow these ancient and not-so-ancient patterns, repeating Big Lies to fuel our own biases and fear?

Here are a few Big Lies being told about this population of asylum seekers.

Big Lie #1: They are economic refugees, not people fleeing persecution. Anyone who has spent time with refugees from Sudan and Eritrea would need a hardened heart not to empathize with their stories. In Eritrea, the United Nations Human Rights Council reports systematic persecution, torture, rape, targeted killings and open-ended “national service” that constitutes a “crime of enslavement.” Journalists and human rights professionals call Eritrea the “North Korea of Africa.” Many Sudanese migrants fled the Darfur genocide and the subsequent ethnic cleansing and mass atrocities. Our daughter’s best friend is one of those. She was three when her family fled. Do you want to see their scars?

Compare other nations: To date, Canada has granted asylum to 97 percent of Eritreans who have applied. European Union figures show the EU recognizes 90 percent of Eritrean claims for refugee status and 56 percent of those from Sudan. And how does Israel compare? It accepted ten. Not 10 percent, but ten individuals total. That’s 0.056 percent, including one person from genocidal Darfur. Shame on us.

Big Lie #2: We must choose between the poor of Israel and asylum seekers. Supporters of Netanyahu’s deportation policy argue that the money spent on asylum seekers takes funds needed for Israel’s own social services. But why set up needy against needy? It’s arbitrary and cruel. The only real drain on the Israeli economy associated with the asylum seekers is the high cost of implementing policies against them. The government is reportedly shelling out $5,000 to the Rwandan government for every migrant it accepts, in addition to giving $3,500 directly to each deportee, paying for one-way plane tickets and two nights in a hotel. It cost $94 million to build Holot, the detention center that holds anywhere from 700 to 2,500 detainees at a time. Operating the facility costs more than $25 million a year. If the government simply processed migrants’ claims and granted them asylum at rates akin to Canada’s or Western Europe’s, it would save the taxpayers a lot of money. Besides, this is a healthy, working population; many hold jobs and pay taxes. Let’s give them the dignity of visas so they can all pay taxes!

Big Lie #3: We can’t save “all of Africa,” so it’s no use saving anyone. This is something people argue to me in conversation all the time. To which I say: Be glad that Schindler didn’t have that attitude. Hell, be glad your doctor doesn’t.

Most urgent for me, as an Israeli, is the purpose of a Jewish state. Are we going to deepen the rut of binary thinking that plagues the world? I say no. We have a higher purpose: to be God’s partners in creating a better world. There are solutions beyond the us-versus-them thinking so prevalent in our own stories and history. For instance: Let’s build a Start-Up Nation University for Refugees. We could train refugees in advanced Israeli innovation and technology. Once trained, they will be welcomed—with proper paperwork so they can make lives—to multiple African states. Once it’s safe to go home, there will be an army of engineers and entrepreneurs and medical professionals and experts in high-tech agriculture and green energy to rebuild Eritrea into its own Start-Up Nation.

In Israel we have a name for people who think in pre-existing categories and reject nuance: Rosh Katan, Small-Headed. Israelis can be such inventive, complex thinkers—so much so that our tiny country is second in patents only to the United States. Let’s apply that expansive thinking to moral issues and create new, vibrant and forward-thinking models for the worldwide refugee crisis. Let’s create ambassadors of light from Israel to the world.

Rabbi Susan Silverman is the founding director of Second Nurture: Every Child Deserves a Family —and a Community and author of Casting Lots: Creating a Family in a Beautiful, Broken World.