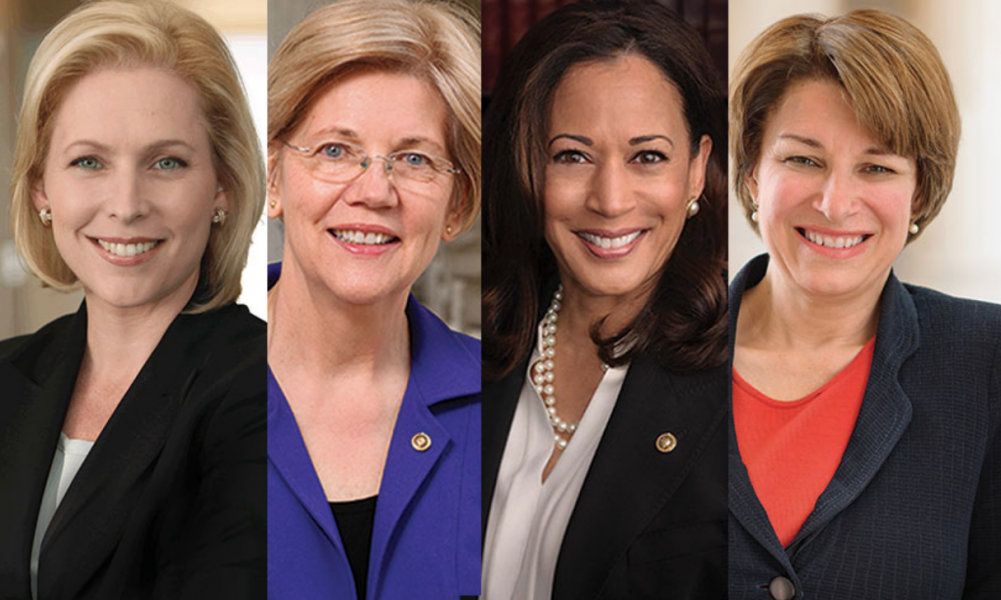 When Hillary Clinton ran for president, her being a woman was icing on the cake. I love icing, so I jumped into her campaign without hesitation. In 2008, I liked Barack Obama, but I felt Clinton had the requisite experience, I agreed with her on most issues, and I wanted her to make history. In 2016, ditto, doubled down, and then some.

Of course, Clinton wasn’t the first woman to run for president—Victoria Woodhull in 1872, Senator Margaret Chase Smith in 1964 and Representative Shirley Chisholm in 1972 were pioneers with highly important symbolic candidacies—but Clinton was the first to have a realistic chance to make it to the Oval Office. As I write this, we’ve already made history in that there are six women among the 24 candidates in the 2020 Democratic presidential primary. Four of them—Kirsten Gillibrand, Kamala Harris, Amy Klobuchar and Elizabeth Warren—are U.S. senators, terrific, strong, substantive women, each with a particular set of views and assets to recommend her.

Yet I have not thrown my support behind any of them, and I’ve been trying to figure out why.

It’s certainly not lack of qualification. Most of these female candidates are more qualified than any man in the field. I think two of them could win (though I’m not ready to say which ones). Furthermore, as women, they bring to the table an extra layer of sensitivity and awareness, based on their own life experiences and those common to half the population.

It’s not like me to be neutral. I’ve never pretended to be an objective observer of the political scene. So what’s stopping me—and, I notice, many other feminists—from picking one of the female candidates and going to work on her behalf?

Some of our motives are purely practical. First and foremost, the goal of Democrats is to get rid of the Orange Menace. “I’m for anyone who can beat Trump” is the mantra, among liberal women as well as men, and that consideration keeps me from wanting to splinter the vote on the left. If a man emerges from the field with a clear lock on the race, most feminists will go with the flow and lobby him on our issues later. Even with so many great women to choose from, it’s better to save our finite financial resources and political energy until we see how things shake out.

A second, more nebulous motive is the sense that, were we to throw our support to one woman at this point, it would feel—and look—as if we’re rejecting the others. I’m not sure if that’s an affirmation of my pro-woman loyalty or simply an excuse for shilly-shallying. All I know is it’s holding me back from naming a favorite. The media love a cat fight, and I’m in no hurry to throw them raw fish.

Regardless of the positive reasons I might cite for my decision to support Madam Senator A, they would be spun into implicit criticism of Mesdames Senators B, C and D—which would not be good for those fine women, for the Democratic party or for the feminist cause.

My reluctance may be partly emotional, but it’s also pragmatic and protective: Were I to declare now for one of the four women, I’d be inclined to gather information that casts doubt on the record of all the other candidates. That would include the record of the person—male or female—who might end up heading the Democratic ticket. I’m not willing to do Trump’s opposition research for him.

Third, I’m determined not to make gender my sole criterion. Just as not all women are feminists—witness Golda Meir, who served four years as Israel’s prime minister without doing a single thing to advance the status of Israeli women—lots of men are feminists. (Per Merriam-Webster, a feminist is a person who supports the “legal, economic, and social equality of the sexes.”)

Some of the male presidential contenders have been reliable allies of women locally, legislatively and on the national scene. Still, to compensate for the lack of experience living in a woman’s skin, I would want from each man an iron-clad commitment to specific feminist goals, among them reproductive rights, economic justice, universal health care, ending violence against women and passage of the Equal Rights Amendment. With that guarantee, I’d have no trouble working my heart out for him.

One thing the 2016 election taught us was that when it comes to reactions to a woman running for office, there’s no telling what factors will be decisive: her personality, emails, pantsuits or campaign strategy or her opponents’ dirty tricks, misogyny or foreign intervention. If we don’t get the icing in 2020, I don’t want the man who stands on top of our cake to be hobbled by attacks from feminist purists leveled against him during the primaries.

It’s novel and heartening to have more than one Democratic woman candidate vying for the “women’s vote” as well as for that of every other constituency. No need to rush things by choosing just one.

Letty Cottin Pogrebin is currently at work on her 12th book, Shanda: Family Secrets, Private Shame, Public Disgrace, and the Fear of Being Found Out.