No, Holocaust Survivor George Soros Was NOT a Nazi

The Origins of this Infamous Canard and How It Spread.
Winter Issue 2019

This is an ongoing multi-part series. This installment includes two stories, Evolution – Soros’s Jewish Identity & Relationship to Israel, and No, Holocaust Survivor George Soros Was Not a Nazi. Additional installments coming soon.

Whether or not they know it, people who call George Soros a Nazi are echoing a malicious lie that was likely invented in the early 1990s by known anti-Semite and conspiracy theorist Lyndon LaRouche, Jr. As early as December 1993, LaRouche’s Executive Intelligence Report (EIR) was falsely claiming that Soros was a Nazi collaborator. “Soros is doing essentially the same thing now, in terms of what he’s doing to Eastern European economies and others, which he did by looting dead and dying Jews in Hungary,” said LaRouche. These and similar accusations published in the EIR set off a chain of lies about Soros that spread throughout the world and can be found on radio and TV, in print and online.

The pretext for the accusations stems from two childhood incidents that occurred after the Nazis invaded Soros’s native Hungary in 1944. The first took place when the Jewish council in Budapest, which had been established by Hitler’s henchman Adolf Eichmann, ordered Soros—then 13—and other Jewish teenagers to work as couriers delivering messages to Jews. As Soros has recounted many times, he showed an envelope he had been given to his father, Tivadar, who, upon opening it, realized it was a summons that would likely lead to internment. Soros warned the recipients not to obey the summonses.

The second incident occurred after Tivadar secured Christian identity papers for George and sent him to live with a Ministry of Agriculture official named Baumbach, who posed as his godfather. Baumbach wasn’t Jewish, but his wife, who was in hiding, was. Baumbach was assigned to make inventories of confiscated Jewish property, and according to journalist Michael T. Kaufman’s 2002 book Soros: The Life and Times of a Messianic Billionaire, he brought George along on a work trip to the country estate of Baron Móric Kornfeld, a wealthy Jew who had left his possessions behind in exchange for permission to leave the country with his family. While Baumbach worked, the teenager walked around the estate and chatted with the staff, hoping that no one would realize he was Jewish.

After Soros came to worldwide attention in 1992 as the investor who made more than $1 billion by short-selling the British pound, he became a sought-after interview subject. In an April 1993 interview on Adam Smith’s Money World on WNET, the New York City public television station, Soros was asked what kind of man “would go eyeball to eyeball with the Bank of England, and bet his fortune that the pillar of the financial establishment would blink?” The interviewer suggested that Soros’s worldview was shaped by the Holocaust, and Soros agreed. He said that when the Germans invaded, his father explained to him that this was a “lawless occupation” where normal rules didn’t apply. “You have to forget how you behave in normal society,” he recalled his father saying. Soros went on to add that he was “adopted by an official of the Ministry of Agriculture, whose job was to take over Jewish properties, so I actually went with him and we took possession of these large estates. That was my identity.”

Soros said “estates” in the interview, but he has said elsewhere that he accompanied Baumbach only once. The idea that Soros routinely helped Baumbach with his unsavory task found its way into a 1995 New Yorker profile, “The World According to George Soros,” in which reporter Connie Bruck writes that Soros “posed as the son of a Hungarian government official, sometimes accompanying the official as he delivered deportation notices to Jews, or took possession of property owned by them.” But it was a widely watched CBS 60 Minutes interview in December 1998, which devoted a segment to Soros’s experiences during the Holocaust, that introduced a new element: a presumption of guilt. In a voice-over, reporter Steve Kroft suggested that Soros’s survival must have come with a “heavy price tag,” since he survived while “hundreds of thousands of Hungarian Jews were being shipped off to the death camps.” When he asked Soros if he had accompanied his “godfather” as he confiscated property from Jews in Hungary, Soros, seemingly oblivious to Kroft’s insinuation of complicity, simply replied yes. When Kroft asked him if he felt guilty, Soros said he had “no sense of guilt” since he “was only a spectator.” “George recognizes that his answer was lame,” says Peter Osnos, himself a child of Holocaust survivors and Soros’s longtime friend and publisher. “George, for all his attributes, is not as articulate as you might expect.” 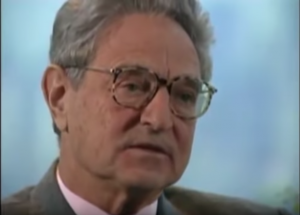 Soros’s 60 Minutes interview further fueled the controversy around him.

These interviews provided fodder for conspiracy theorists to claim that Soros had admitted he was a Nazi collaborator. The 1993 attack in LaRouche’s EIR specifically mentions the WNET interview. As the years passed, LaRouche and his followers intensified their invective—for instance, maligning Soros in 2004 as “a Nazi beast-man seizing Jewish properties.” Around this time, the false accusation began getting picked up and expanded by right-wing talk show hosts on radio and television who opposed Soros’s political views. Glenn Beck was not the first to bring it up, but in November 2010, he falsely claimed on his Fox News show that Soros “had to help the government confiscate the land of his fellow Jewish friends and neighbors.” The Nazi canard has also been circulated by extreme right-wingers such as commentator Ann Coulter, InfoWars founder Alex Jones, and author and filmmaker Dinesh D’Souza.

Even some Jews who don’t like Soros’s liberal ideas—and what he funds—have taken up the Nazi trope. In their 2006 book, The Shadow Party: How George Soros, Hillary Clinton, and Sixties Radicals Seized Control of the Democratic Party, David Horowitz and his coauthor Richard Poe claimed that Soros was a Nazi “collaborator in fascist Hungary” and “survived [the Holocaust] by assimilating to Nazism.” Israeli pundit Caroline Glick has also spread the tale. In a September 14, 2017 column in The Jerusalem Post, Glick brought up the 60 Minutes interview, in which, she asserted, “Soros proudly admitted that he collaborated with the Nazis during the Holocaust.” (Glick, an assistant foreign affairs adviser to Benjamin Netanyahu in the 1990s, recently joined the list of Israel’s new right-wing party, Hayamin HeHadash.) In May, Jewish comedian and actor Roseanne Barr tweeted to Chelsea Clinton: “By the way, George Soros is a nazi who turned in his fellow Jews 2 be murdered in German concentration camps & stole their wealth…” Barr later apologized.

Soros, says Osnos, isn’t generally bothered much by what is said about him. But the accusation that he collaborated with the Nazis is an exception, because it involves his father, whom he was very close to and whom he greatly admired for saving his family. “The idea that this trope blights George’s name is, in my view, an outrage,” says Osnos. “It’s so completely beyond the pale untrue.” Osnos finds it incredible that anyone would even think to call a young teenager whose life was at risk a collaborator. Back then, he says, “you just did what you had to do so you didn’t end up marching into the gas chamber.”

END_OF_DOCUMENT_TOKEN_TO_BE_REPLACED

2 thoughts on “No, Holocaust Survivor George Soros Was NOT a Nazi”