Arrests at the Western Wall 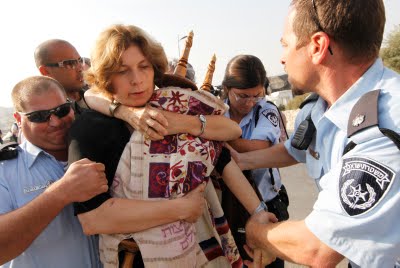 Anat Hoffman, leader of Women of the Wall, was arrested last night while praying and singing the Shema with a Hadassah group at the Western Wall in Jerusalem.

Hoffman was detained and held overnight in police custody on charges of disturbing the peace, her sixth arrest since she helped establish the group some two decades ago.

“In the past when I was detained I had to have a policewoman come with me to the bathroom, but this was something different,” Hoffman told The Forward. “This time they checked me naked, completely, without my underwear. They dragged me on the floor 15 meters; my arms are bruised. They put me in a cell without a bed, with three other prisoners, including a prostitute and a car thief. They threw the food through a little window in the door. I laid on the floor covered with my tallit. I’m a tough cookie, but I was just so miserable. And for what? I was with the Hadassah women saying Sh’ma Israel.”

After her release today, Hoffman, also executive director of the Israel Religious Action Center, the legal arm of the Reform movement in Israel, was issued a restraining order from the Western Wall for 30 days.

4 thoughts on “Arrests at the Western Wall”