Today, the question of whether Jews dislike domestic pets may seem preposterous. After all, this is the age of the “bark mitzvah,” in which dogs and cats are cherished members of many Jewish households. But for years, the idea that Jews have a fraught relationship with animals—often dogs, specifically—has circulated through the culture.

Literature is filled with references that underscore this ambivalent relationship. In The Merchant of Venice, Shylock is anguished at being considered as lowly as a dog: “You call me misbeliever, cut-throat dog, And spit upon my Jewish gaberdine,” cries the moneylender. Much later, S.Y. Agnon, the towering figure of 20th-century Hebrew literature, wrote about a stray dog in his 1945 novel Only Yesterday. By the end of the story, the animal turns into a monstrous creature, biting the book’s protagonist to death. And Yiddish sayings—one metric of popular sentiment—invoked a distaste for dogs, including an epithet for an immoral person: a hunt mit di oyern, or “a dog with ears.”

Fear of dogs may be tied to cultural touchstones embedded in the collective Jewish consciousness. “Many Jews who came from Europe have a hang-up about dogs,” says Natan Slifkin, an Orthodox rabbi noted for his work on the Torah, zoology and science. The Nazi obsession with dogs, for one, may have contributed to an inherited anxiety. High-ranking German officers were often accompanied by dogs trained to brutalize prisoners; Kurt Franz, the sadistic commander of Treblinka, owned a dog named Bari that was trained to attack inmates’ genitals. Hitler himself was famously devoted to Blondi, his German Shepherd. (Blondi met her end in April of 1945, when Hitler, realizing the war was nearing its end, tested his cyanide capsules on her.)

The tenuous connection between Jews and animals has biblical roots. “We don’t have a lot of texts that speak about the relationship between humans and animals,” says Robin Nafshi, a Reform rabbi in New Hampshire. “In biblical times, animals were there for working—it’s a very different relationship than we have today.” Some canonical texts, though, espouse the importance of animals; a line in the Book of Proverbs declares “A righteous person takes heed of the life of his beast,” and the Talmud exhorts that “A person must not eat before feeding his animal.”

Rabbinic law isn’t unanimous in its affection for animals, though. In 1992, prominent Orthodox rabbi Howard Jachter published a lengthy article in Journal of Halacha & Contemporary Society entitled “Halachic Perspectives on Pets,” dealing with issues ranging from the permissibility of owning pets at all, to feeding pets non-kosher food, to the use of a leash. Jachter refers to Maimonides’s ruling that raising any dog is forbidden “unless it is secured by chains” but notes that many other rabbis take a far more lenient approach to pet ownership. The Talmud cites Rabbi Natan, who contends that raising an “evil dog” in the home violates the biblical prohibition not to “place blood in your home.” The crux of the question rests in what constitutes an “evil dog.” The exalted commentator Rashi says of an “evil dog:” “It bites and it barks, thereby causing women to miscarry.”

Legal questions extend beyond the mere act of ownership. Can one feed a dog chametz on Passover? (No.) May a blind person bring a guide dog into a synagogue? (Opinions vary.) Is neutering a pet permissible, given the halachic prohibition on removing reproductive organs from both humans and animals? (Possibly, through a complicated process of temporarily selling the pet to a non-Jew, who then instructs another non-Jew to perform the procedure—but even then, only in cases where the health of the animal is at stake—or by using a veterinary procedure that renders the animal infertile without removing any organs.)

And for some Jews, the financial burden of pets takes a backseat to what they see as a more important responsibility—children. “Pets are very demanding of resources and money, and Jews usually have large families,” says Slifkin. “I love dogs, but the reason I don’t have one is I have five kids.” (Slifkin, however, does own a menagerie of more unusual pets: pheasants, geckos, frogs, bats and iguanas among them.)

Cultural and legal issues aside, pets are commonplace among contemporary American Jews. Twentieth-century Jewish ascendancy to the American middle class brought with it an absorption of typical American practices. The prevalence of pets has surged in general in the United States over the past 40 or 50 years, according to James Serpell, director of the Center for the Interaction of Animals and Society at the University of Pennsylvania’s School of Veterinary Medicine. A 2008 survey by the World Society for the Protection of Animals found that some 22 percent of American households have dogs. (The same survey found that about 5 percent of Israeli households own dogs.)

The growth in pet ownership has led to widespread incorporation of domestic animals into family life. In 2012, Americans spent $52 billion on their pets, according to the American Pet Products Association. Jews are part of the trend—some dogs are feted with “bark mitzvahs,” parties to mark 13th birthdays. Joan Rivers celebrated her dog Spike’s bark mitzvah on her daytime television show; Spike wore a tallit and a kippah for the occasion. In 2007, a group of Florida rabbis wrote a book called How to Raise a Jewish Dog, and there’s also Yiddish for Dogs—though presumably sans insults.

Some Jews also mark their animal companions’ deaths with memorial services. Robin Nafshi, who has performed such services, estimates that the ceremony has become a more public part of Jewish life in the last 15 or 20 years. The services “should not mimic a funeral service for a human,” says Nafshi, and their content is largely made up of readings, often from the books of Psalms or Ecclesiastes. “It’s meant to allow the people who shared a life with this animal to offer some reflections and memories,” she says, adding that people “have a need to be able to mourn and say goodbye not only to the humans we lose.”

Photographs selected from among entries for our 2013 Pets & Jews Photo Contest. Darwin the Parrot, submitted by Lucy Towbin; Puppy Ziggy, submitted by Marisa Scheinfeld; and Cat Ringo, from Gloria Hernandez. 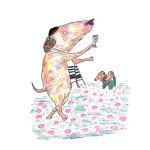 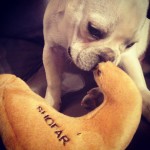 The Best Entries from the 2013 Jewish Pets Contest