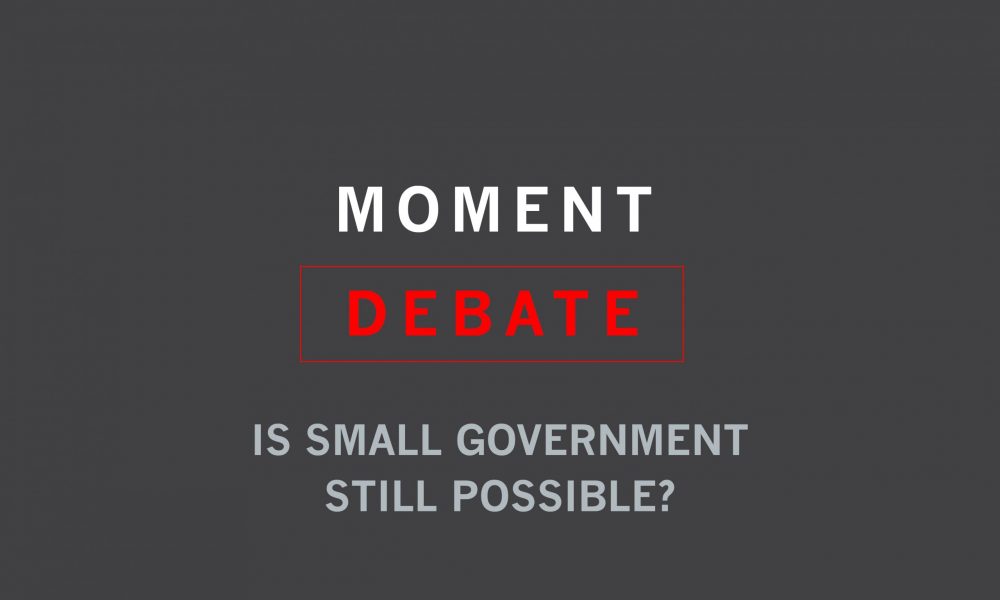 In the previous issue, Moment asked whether arguments for small government are still possible at a time of pandemic and massive government intervention. Russell Roberts said yes; Harold Meyerson said no. Here, they respond to each other’s arguments. Read the original debate here.

I don’t think there’s a lot of evidence that the U.S. response to the pandemic was disappointing because the government was too small. There were a number of missteps made by government leaders that had nothing to do with the size of government. In New York State, a lot of deaths occurred because we were unaware of the dangers to the elderly. Tragically, a lot of people were sent back from hospitals to nursing homes.

The Centers for Disease Control and the World Health Organization misled the American people and others about the value of wearing masks. That’s not a small government/large government problem. And the handful of places that seem to have been successful against the virus—such as China—used methods that would be unpalatable to Americans, such as using the military to quarantine people by force.

I said before that there are no libertarians in a pandemic. In the end, though, I don’t think there will be reliable evidence that more-activist governments did better than less-activist ones, except in extreme cases such as China. There are a lot of hot takes on this that will perhaps look embarrassing in a year or so. It’s hard to know with certainty what’s been effective or ineffective. As for the idea that the argument in favor of small government would be over if not for the role of money in politics, well, those of us who care about liberty and responsibility, agency and autonomy, believe that they are conducive to human flourishing. It really doesn’t have anything to do with money in politics, and to suggest it does is disrespectful of a long tradition in Western thought of the value of individual liberty.

Russell Roberts is the John and Jean DeNault Research Fellow at the Hoover Institution.

Smart governments do respond nimbly to crises. In Franklin Roosevelt’s first year as president, to cite one example, his Civil Works Administration created 4.3 million jobs in 90 days to avert starvation in a nation with one-quarter of its workers unemployed; they built 40,000 schools and paved roads so farmers could get their goods to markets, among a host of necessary tasks.

Dumb governments–more precisely, governments that don’t take governing seriously–don’t respond so nimbly. In the sway of anti-government and anti-empirical ideologies, the past two Republican administrations haven’t taken governing seriously, as we know from their inability to respond to Hurricane Katrina, the current pandemic and the climate crisis. Enmeshed in the cult of small government and anti-regulation, Trump’s Occupational Safety and Health Administration has issued no workplace safety rules during the pandemic, not even for meatpacking plants. Sometimes small government equals death; we’re stuck in such a time today.

An informed, activist government is also essential to combat the mega-corporations that control so much of our lives. Our government has yet to do anything to limit the privacy violations Big Tech companies engage in to maximize their profits, while the more social democratic governments of Europe have passed laws that enable their citizens to protect their privacy from these behemoths.

The laissez-faire policy of allowing Americans to go maskless in crowds, or openly carry guns to politically charged events (or worse yet, to polling places) ignores the effect of such policies on public safety—as the Right might term it, on the Right to Life. In the COVID-19 and Facebook Age, big government offers a lot more protection than small.

Harold Meyerson is editor-at-large of the public policy magazine The American Prospect.