Meet the Jewish Women At the Heart of FX’s ‘Mrs. America’

FX’s newly released Mrs. America portrays the battle between the second-wave feminists who aimed to ratify the Equal Rights Amendment (ERA) and conservative Phyllis Schlafly who strongly opposed their agenda and organized the “STOP ERA” campaign. The series documents the stories of these women who shaped the women’s liberation movement—several of whom happened to be Jewish. Here’s a bit about each: 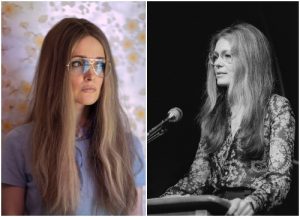 Gloria Steinem (Rose Byrne) is a leader and spokeswoman for the American feminist movement and was head of the movement to ratify the ERA. Steinmen co-founded Ms. magazine and the Women’s Media Center and continues to advocate for women’s equality issues.

Steinem’s father was Jewish and the son of immigrants from Wurttemberg, Germany and Radziejow, Poland, according to the Jewish Women’s Archive biography of Steinem (written by Moment columnist Letty Cottin Pogrebin). Steinem’s paternal grandmother, Pauline Perlmutter Steinem, was the daughter of a cantor and grew up in Munich after her family’s escape from Russia. Pauline was also a prominent women’s rights activist, the chair of the educational committee of the National Woman Suffrage Association, a delegate to the 1908 International Council of Women, and the first woman to be elected to the Toledo Board of Education. In the last years of her life in the mid-1930s, Pauline rescued many of her family members from the Holocaust by getting them out of Germany and into Palestine.

For the past 20 years, Steinem has taken part in one particular Jewish tradition, joining a small group of “seder sisters” every Passover who plan and perform a women’s seder. The seder’s founding premise encompasses the advocacy that Steinem has dedicated her life to: women matter and must be acknowledged for their roles in the Exodus story and their current struggle for equality in Jewish life. 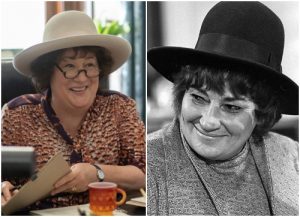 Bella Abzug (Margo Martindale) was a three-term Congresswoman and cofounder of the National Women’s Political Caucus.

Abzug was born in the Bronx in 1920 to two Russian Jewish immigrant parents. Abzug learned to read Hebrew as a young girl and was said to be an outstanding student in the Talmud Torah school she attended. Abzug’s Hebrew school teacher recruited her to a left-wing labor Zionist group, Hashomer Hatzair (“the young guard”).

When Abzug was only 12 years old, her father Emanuel died, one year before Hitler came to power. Tradition prohibited Abzug from saying Kaddish for her father in synagogue, but she did so anyway. She attended synagogue and davened every day before school for a year despite others’ disapproval.

Abzug carried the same perseverance to remember her late father with her through her activism. In 1971, she became the second Jewish woman to serve in the U.S. Congress, where she championed civil rights, women’s rights and gay rights. Her work led to numerous victories for the women of the 1970s, including a ban on discrimination against women in obtaining credit, loans and mortgages. 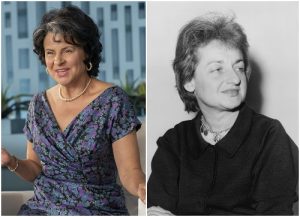 Betty Friedan (Tracey Ullman) is remembered today as the mother of the women’s movement who wrote The Feminine Mystique and co-founded the National Women’s Political Caucus.

Friedan was born in Illinois in 1921. Her parents’ Jewish families were from Russia and Hungary. While Friedan advocated for all women and aimed to help the women of the era escape the housewife role they were expected to fulfill, she led several movements to help Jewish women in particular.

According to the JWA, Friedan attended the International Women’s Conferences sponsored by the United Nations in 1975, 1980, and 1985. In 1984, Friedan led a delegation of American Jewish women in a U.S.-Israel dialogue entitled “Women as Jews, Jews as Women.” The dialogue led to the founding of the Israel Women’s Network, which was said to have been a result of Friedan’s call to Jewish women to “put your bodies where your mouths are.”

Friedan, like all of the women featured in Mrs. America, was strong, fearless and determined. In this time of great uncertainty in our world, let Mrs. America remind you of the strong women who fought so hard to earn us the freedom we have today.

END_OF_DOCUMENT_TOKEN_TO_BE_REPLACED

Facebook Twitter Pinterest linkedin Telegram
This March 15th, Supreme Court Justice Ruth Bader Ginsburg would have been 88. Over the last year of her life, she and I collaborated o...