Arts & Culture, From the Newsletter, History

For a number of years, my family and I have spent summer vacations on the island of Martha’s Vineyard in Massachusetts. A popular New England destination, just south of Cape Cod, the island boasts a surfeit of sandy beaches, stretches of fertile farmland, charming old churches and historic harbor towns. Time there is spent bike riding, walking, swimming, grilling fresh fish, reading, and patronizing farmers’ markets and other local businesses. Many artists live or vacation on the island, lured by the special island light, and there are a generous number of art galleries, many of which I’ve explored. This summer, however, I branched out from my usual haunts and for the first time visited the Martha’s Vineyard Museum.

Formerly in Edgartown on the eastern side of the island, the museum, which is poised to celebrate its centennial next year, moved in 2019 to its new home in the stunningly renovated historic United States Marine Hospital in the town of Vineyard Haven. Perched on a hill, the former hospital, which was built in 1895, has a commanding view of the sea, light-filled exhibition spaces and, somewhat to my surprise, a current exhibition on the history of the Jewish community on the island. 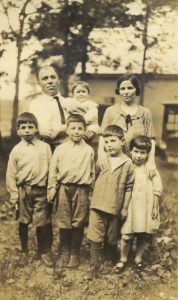 Titled “They Planted the Seeds: Creating Jewish Community on Martha’s Vineyard,” the exhibition, which features photographs, artifacts and delightful oral histories, has been on view since May and closes on September 18. The show tells the story of how the first Jews came to the island in the late 19th and early 20th centuries, primarily from Eastern Europe. Although the Holshanetzkys (Hall) family was possibly the first to settle on the island, Lithuanian-born Sam Cronig, who arrived in 1905 after fleeing from the Cossacks, is recognized as the pioneer settler. The Brickman and Issokson families followed shortly thereafter, opening clothing and dry goods stores.

Coming to an isolated island, not speaking the language, with little or no funds, these men and women were somehow able, within a very few years, to establish some of the biggest and most successful businesses on the island—grocery stores, real estate businesses, shoe stores, tea rooms, inns and clothing stores. Children often worked in these businesses along with their parents and some took over after their parents retired. A number of those businesses, notably Cronigs grocery and Brickmans clothing, are still thriving today.

There were, of course, challenges, including the difficulty of obtaining kosher food, which had to come from Boston or New Bedford. And, of course, as elsewhere, there was prejudice and antisemitism. On view, for instance, is an excerpt from a deed prohibiting sales of property to any but “persons of the white race who are of the christian religion.” Jews were also not welcome at some Vineyard hotels. The Tashmoo Inn was one place that Jewish visitors often stayed. Another was the Gosnold, run by Mae Cronig. One hotel had a carefully parsed handout discouraging Jews from staying there because they might not feel welcome given the bias of other guests. For Jews in permanent residence, there was also the challenge of creating a cohesive community given that members practiced their religion in diverse ways. 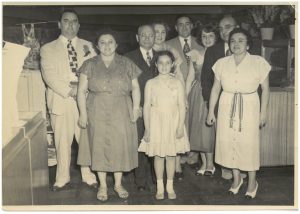 The Brickman family inside their dry goods store

It was not until the 1930s that there were enough Jewish men living on the island to make up the minyan required to hold services. A turning point came in 1937 when members of the community met to discuss the creation of a Hebrew Center to meet the spiritual, intellectual and social needs of the community. By July 1940, the center had become a reality. In the beginning there were 49 members—including the Perlsteins, Cronigs, Issoksons, Levines, Ossmans, Halls and Brickmans—but membership continued to grow as seasonal residents joined the congregation and participated in its activities. Now in its 82nd year, the Martha’s Vineyard Hebrew Center is both a place of worship and a gathering space. At first there were visiting or part-time rabbis, but since 2003, Ask The Rabbis contributor Rabbi Caryn Broitman has served in that capacity full-time.

Compelling oral histories of a number of descendants of the original families make mention of visiting celebrities, including Richard Dreyfuss and Art Buchwald. Visiting rabbis included Rabbi Balfour Brickner, who traveled to the island from New York City. That hit home for me, since Rabbi Brickner was the rabbi I studied under at Temple Sinai here in Washington when I was confirmed. Need I say the words Jewish geography”?