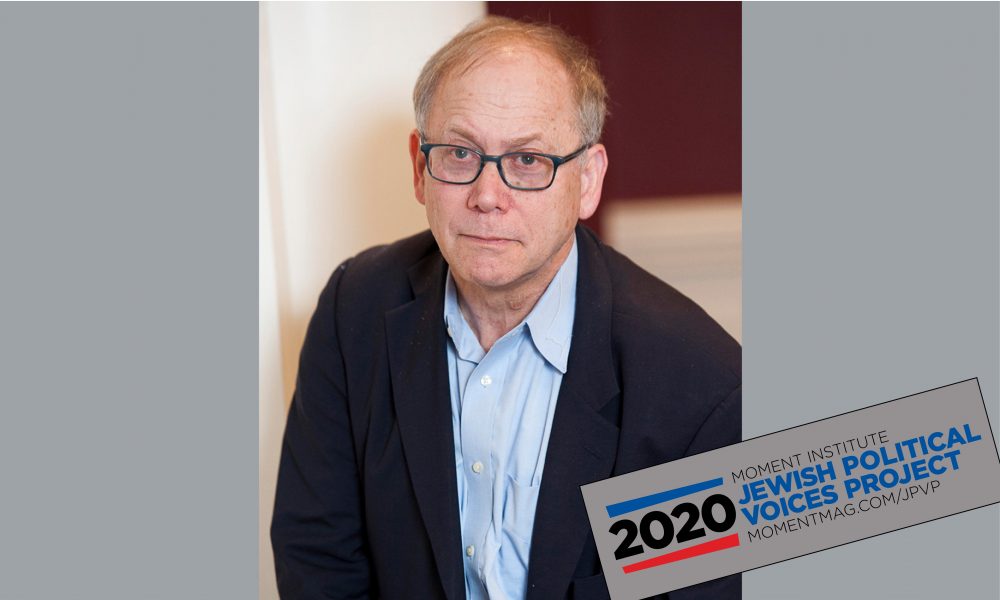 Mark Goldhaber (67), a Republican from Raleigh, NC, is active in the Jewish Federation and AIPAC. He previously worked for a Republican member of Congress and the National Republican Congressional Committee, and he was a Reagan appointee to the U.S. Department of Housing and Urban Development. His wife is a Democrat and he’s a Republican, which they’ve “dealt with happily for 35 years.”

From a policy perspective, on many key issues, it has been better than I would have expected. These policies include Iran, China, Israel, and the overall economy prior to the pandemic. The president’s personal approach and how he has conducted himself has been significantly worse than I expected.

I think the president has been overly divisive and that has been a real negative for the country. But I believe he has fulfilled a number of his key campaign promises, for example, on the trade we have a new U.S./Canada/Mexico trade agreement which was a key promise fulfilled. His supreme court appointments have been individuals who followed the original intent of the constitution which was a critical promise fulfilled. Finally, as relates to Israel and Iran, the president has fulfilled those commitments and as a general rule, I think it’s a positive when candidates fulfill their promises once they are elected.

Joe Biden has been pretty much what I expected. His campaign is largely that he is not Donald Trump. I have been surprised by how much Bernie Sanders has been able to impact Joe Biden’s positions. Finally, I was surprised at how quickly Joe Biden was willing to give up long-held positions on issues like the Hyde Amendment.

I would give Joe Biden a significant edge over Donald Trump. But Trump could still win if the level of violence currently occurring in U.S. cities gets worse or does not subside. Also, if we get a vaccine prior to election day, that could impact the results. I am answering these questions prior to any of the presidential debates, which could shift the outcome significantly.

As noted above, I give Joe Biden a meaningful edge. He should just continue to hide in his basement and he should win.

Donald Trump should utilize his second term to rebuild the economy. I don’t expect him to become a great healer and even if he tried 50% of the population wouldn’t care and the media would find some reason to object.

He should focus on the economy and the impacts of COVID-19. He should work hard to get kids back to school.

If there is a very close election and Donald Trump wins the electoral college and loses the popular vote, I would be concerned that a large segment of the population would not be able to accept the results. As someone who, as a young man, worked on a number of elections, any time an election is extremely close the flaws in how we as a nation vote are always going to be messy. There are tens of thousands of polling places and absentee ballots, all of which under stress have flaws.

In-person voting should not be required in November because in a pandemic there will be a lot of people who will choose to vote absentee which is very acceptable. There has always been in every state the ability to vote absentee. Those options vary by state but each state gives voters options that are appropriate and should be used this time.

Yes. I think that these issues have hurt Trump’s chances of reelection, particularly on the pandemic. He took far too long to accept the concept of wearing masks. Had he strongly encouraged the wearing of masks earlier in the pandemic, I think the voters would have had a better perception. The handling of the pandemic has appeared to be disorganized. As regarding Black Lives Matter, that’s a more mixed picture. As the violence continues, it is putting a cloud on the Black Lives Matter movement and moving away from the critical issue of police conduct as relates to George Floyd and others where most of the country was in agreement.

I still believe there will be high voter turnout because there is strong voter intensity. I think it will shift to much more absentee voting, but there will still be a decent turnout.

I would still like to vote on election day in person, but I am prepared to vote absentee, having already applied for an absentee ballot

Currently, North Carolina is a hot spot and only partially opened. As a general rule, I give the state passing grades, though I think it was a mistake to identify essential and non-essential businesses because those that were identified as non-essential were badly damaged. It would have been much better to keep them open but push social distancing and masks earlier. There is plenty of blame to go around if your focus is simply to identify failure, including the CDC for the inconsistent communications throughout government. One should remember that the distinguished New England Journal of Medicine originally published an article at the beginning of the pandemic that masks weren’t necessary so that just demonstrates how, as a society, our perspective is changing as our knowledge increases.

The pandemic is clearly identifying failures in our public education. The inability to do effective distance learning is ridiculous when you consider our country leads the world in gaming and technology. But distance learning, even when it is good, doesn’t replace classroom teaching for at least a couple days a week. I think it is important to open up schools with face masks and spacing to the greatest degree possible. Clearly this is going to exacerbate the education gap between those that have more resources and it will increase homeschooling which might be a plus.

Post this election cycle, I continue to hope that the public arena will be more tolerant of a broad perspective of viewpoints. There should be the ability to have conversations between those of us who are economic conservatives, like myself, and individuals who have more liberal perspectives, and not feel that our perspectives are being canceled or derided in a society where cancel culture is far too often becoming the norm.