Nila Friedberg is a linguist living and teaching in Portland, Oregon. She grew up in Vilnius, Lithuania, and her grandparents, as well as several of their neighbors, were Holocaust survivors. “Some of them were silent about it, and I only learned about their survival later in life,” says Friedberg. “But some were willing to speak, and as a child, I heard countless stories about the ways my grandparents and neighbors escaped death.” While on a run in a park in 2019, Friedberg was reminded of one of these neighbors by the smell of Oregon lilacs. “I realized that the most important words I will ever write will be an account of the Holocaust survivors’ lives – the lives of the people I knew and loved.” Moment is pleased to be able to share four of these stories below.

1. A KADDISH FOR A TRAIN 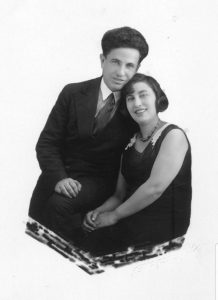 Grandpa always smiled. He smiled as often as the Soviet poster cosmonaut Georgi Grechko, but unlike the jovial space legend, he was nearby, sitting in the balcony on a red stool and reading a newspaper. Grandma was the talker: he was the ear. Grandma was the field marshal: he was the sergeant, dispatched to the store on a short notice, at any time of the day.

We loved to wrestle: he would always let me win. He often carried me in his arms, and once, after recovering from the first stroke, got dizzy and lost balance. We both fell on the grass, giggling, but I landed on a broken bottle. I always found it ironic that the scar, “the Grandpa mark,” became my memory of happy times. We loved our walks: a gigantic metal monster called “khlebozavod”, “the bread factory”, was our favorite destination. We loved going to Valakumpi – the Vilnius equivalent of Catskills, the Lithuanian Yiddishland of the 1970’s. There in Valakumpi, while sleeping in a hammock, Grandpa had his second stroke, from which he never recovered. We did not notice it right away: he seemed to smile in his sleep.

Thirty years after his death I discovered that before World War II, Grandpa had a wife. Her name was Asne: she was not my grandmother. They had a baby, who looked just like Mom or me. In 1941, Asne and Grandpa tried to escape from the Nazis. They took a train, the train got bombed. Asne and the baby died. Grandpa kept living.

2. LILACS AND THE PIT 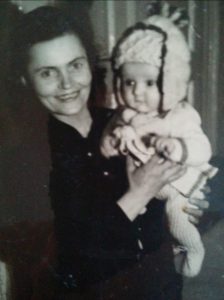 Grandmother Dveyra with my mother (Vilnius, 1947)

Her name was Beyle. She lived in a small wooden hut, a lonely relic of the pre-war shtetl world tucked away among the Khrushchyov-era panel apartment buildings. My grandmother Dveyra called Beyle “a mishuggeneh,” insisting that Beyle’s voice was too loud, too agitated. I vaguely remember Beyle’s face: her bifocals, like two pieces of magnifying glass, turned her eyes into two glossy plums. The earpiece had broken off a long time ago and was attached to the frame with a dirty bandage.

Rumors had it that Beyle sold old junk at the market – an activity frowned upon in Soviet times. She had no phone line and would frequently come to Grandma’s apartment to “klingn” (“make a call”). At first, Beyle was generously granted permission. Later, a neighbor of ours got arrested for black-market dealings, and Grandma panicked: she suspected every phone in the building was tapped. “If Beyle talks about her “gesheft” (business) on our phone, ‘they’ will arrest me!” she lamented. I was instructed not to let Beyle in under any circumstances. I still recall climbing on top of a red stool, staring at Beyle’s headscarf through a peephole, while the doorbell rang five, six, seven times, until Beyle left. “What if she saw my eye through the other side of the peephole?” I thought, terrified.

Then Beyle’s visits stopped. But I continued to visit her. To me, a child of Soviet apartment buildings, her “detached house” seemed mysterious and folkloric – like Baba Yaga’s house on chicken legs. As a matter of fact, Beyle did keep chickens, and a rooster: for us, her neighbors, the rooster took the place of an alarm clock. The house was full of toys – rubber ducks and hippos left behind by her children who had moved away and disappeared. Like the house, the toys smelled of rotten wood. “Take as many as you like,” Beyle would often say, and then, pointing at her children’s photos with a dirty finger, “These ones aren’t coming back any time soon.”

The most exciting part of my visits, though, were the lilacs. I had always liked the smell of lilacs, and they grew right in Beyle’s yard! Whenever they were in bloom, Beyle would offer me some, and, raising her arms, would break off the branches frantically, as if it was her last chance. I would then return to Grandma’s panel building, rushing upstairs, carrying a gigantic bouquet, with pockets full of toys – lots of toys! Then disappointment would strike: “The lilacs stay, the toys go to the trash.” Grandma did not like the toys’ smell. 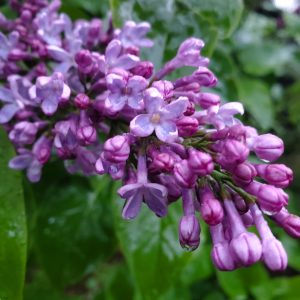 Lilacs remind me of Beyle, who survived a massacre of Jews in the Ponar Forest.

Around 1981, right before Grandma moved to a new apartment, I ran into Beyle on the street. For some reason, she really wanted to explain why her voice was so loud. “You see, I am deaf in one ear,” she said. “During the war they shot me and threw me into the pit in the Ponar Forest, just like the other Jews. Then, a bomb exploded. I woke up. There were bodies on top of me. Lots of them. So, I started crawling up, up, up…” Beyle stretched her arms to the sky, as if reaching out for the lilacs. “That’s how I got out,” she continued. “I found the strength. It’s because there were children on top of me, and children don’t weight much.”

I don’t know when Beyle died or where she was buried. I don’t remember if I ever told Grandma about Beyle’s escape from Ponary. My little Grandma Dveyra herself survived the Kovno ghetto, the selection, and the Stutthof concentration camp.

But I remember Beyle every time I see a wooden hut tucked away among high-rises.

Every time I enter a “detached house” smelling of rotten wood.

Every time I see lilacs. 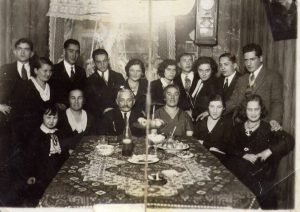 My great-grandparents, Itzko and Rachel Zlotkovich (center). Vilnius, 1932.
Grandmother Hanna (standing, third from the right) is the only one in this photo to survive the Holocaust.

In 2014, during our “heritage tour” to Vilnius, I took a picture of my son in front of a bright yellow house closed for renovations. There is nothing remarkable about it. Renovations happen everywhere. People move in and move out. Except, when I look at the photo, I only see shabby, sickly particle boards, and no life at all. For me, for our family, life in this home ended 80 years ago. No architect can ever renovate or revive it. In 1941 my great grandparents were taken straight from this house to the massacre pits of the Ponar forest.

I never told my son how much I wanted to open the door and enter the building. To walk upstairs, to count the steps. To walk downstairs, like the great grandparents I never knew. Here they are, in two spotless beige coats, carrying their suitcases down to the ground floor – hurrying, getting short of breath, believing and not believing in what is about to happen. But I cannot walk down the same stairs. Because I am not them, and the entrance is locked… 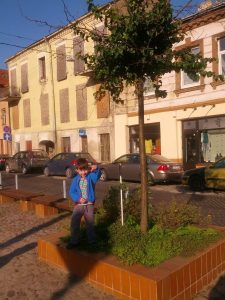 Sometime after the war, when Grandma Hanna returned to Vilnius from Kazakhstan, she entered the building and saw her parents’ apartment. It all looked the same as she had remembered: the furniture, the dishes, the tablecloth… But it belonged to a new owner – the former custodian of the building. I can see this image as vividly as if it were yesterday: Grandma, leaning against the doorway, exhausted from a long journey, scurvy, expectations, and the custodian, dressed in my great grandfather’s suit, eating hot soup from Grandma’s white “curly” bowl. He turns around, stares at her, struggles to hold the spoon, and then says: “You? I thought you were shot…”.

Grandma left, and never came back to that house. As for us, her grandchildren, we never referred to it by what it really was. We simply called it “the house near the shirt store”…

Some kids build sand castles. Some play with Legos. I used to build matchbox towers. Grandma Hanna had hundreds of matchboxes: they were stored in an old cupboard, in the bottom compartment. The cupboard itself was a chest of wonders. I still remember the rhombus-shaped clock on the top shelf. Grandma claimed little gnomes lived there and got out at midnight to clean the carpets. I believed it, and sometimes, during sleepovers at Grandma’s, struggled to stay awake, hoping to see these minuscule helpers with miniature brooms.

But the best attraction were the matchboxes – so different from boring plastic blocks sold at “The children’s world” department store! Each matchbox had its own colorful label. Each had an exotic smell. You could build your own Burj Khalifa tower and patiently wait for its collapse. These matchboxes constantly reminded me that Grandma was special: she did not follow the rules. The matchboxes were also a symbol of trust, my initiation into adulthood at the age of 6. Grandma simply assumed I would not open the boxes, would not light the matches. Nobody else in the family did.

I remember asking Grandma why she kept so many matchboxes. “Because of the war” – she replied in a matter-of-fact way. She did not tell me back then that her whole family perished in the Ponar forest, and she was the only one to survive. She did not tell me that during the war matches meant warmth, hot dinner, hope, light, life. But I learned early on that war has consequences even if you survive. The consequences are the piles of matchboxes and fear – the fear you experience many years later.

The COVID pandemic will end. I do not know why it had to happen: perhaps, to remind us that our world is a matchbox tower which can be set on fire any time. The plague will end, but many years later, our grandchildren will build sparkling castles out of sanitizer bottles and wonder why we keep so many, and what all of it means. 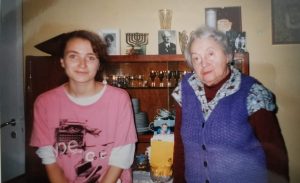 Nila Friedberg is an Associate Professor of Russian at Portland State University. She specializes in linguistic approaches to literature, twentieth century Russian poetry and poetics, and Russian Jewish literature.

END_OF_DOCUMENT_TOKEN_TO_BE_REPLACED

Toscano felt proud of Anna, and after many hours he asked her the critical question: “Can I portray you?”

END_OF_DOCUMENT_TOKEN_TO_BE_REPLACED

One thought on “Lilacs and the Pit: Family Holocaust Recollections”