With tanks on the horizon, humanity illuminates paths to hope
Kyiv Diary, Latest

On the heels of the devastating bombing of an apartment complex in Dnipro and the helicopter crash in a Kyiv suburb, today we learn that Germany and the United States will be sending tanks to Ukraine in its ongoing battle to defend itself from Russia. Meanwhile, from my vantage point, love continues for Ukraine, for the beloved city of Kyiv, for the defenders and for one another. People continue to volunteer fearlessly for various undertakings: cooking for soldiers and the elderly, assisting in health-care facilities, donating blood (as I  did), collecting equipment and medicines and providing transportation for people delivering food and water to those in need, as well as to animal shelters. At the same time, way too many businesses have shut down and people have lost their jobs.

Amidst these challenges, power outages are ongoing, either scheduled or part of so-called emergency cutoffs. Buying alternative power appliances such as power banks, rechargeable lanterns and LED flashlights, which are now significantly more expensive than they are abroad, is beyond the budget of many families. 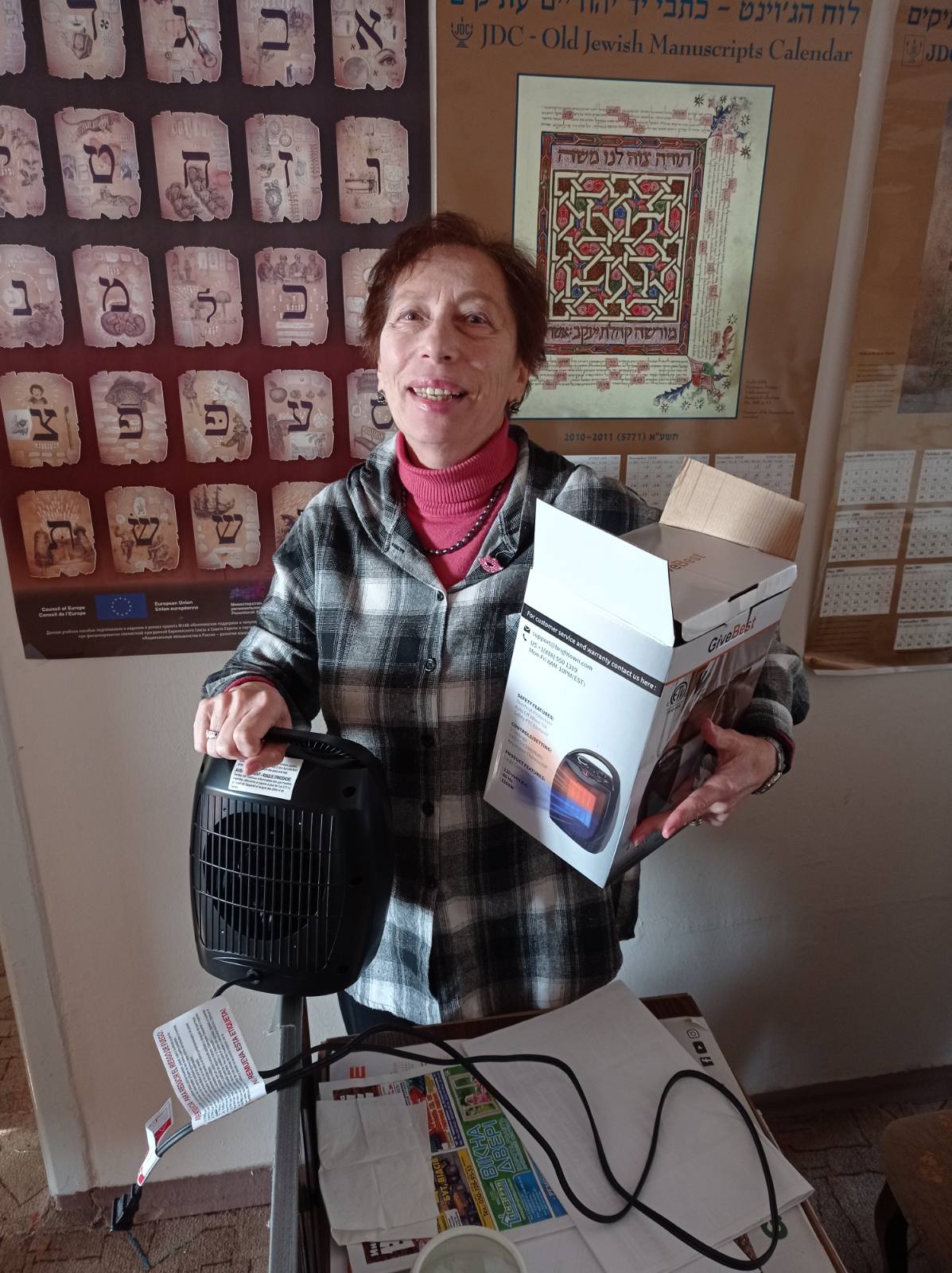 As I mentioned in a previous post, I reached out to synagogues in the United States, three of which responded and have been sending heaters and various alternative power appliances. Many people didn’t even know that such “miracle” gadgets existed. Some literally cry when they get portable power stations, flashlights or rechargeable lanterns.

“I am 72 and, despite my retirement age, I continue to work as a chief librarian in the Judaica Department of the National Library of Ukraine. I love my work,” writes one recipient in a letter to donors. “I live with my cat Liza in a flat on the 10th floor of a multi-apartment building. I use stairs a lot, instead of the elevator, due to lack of electricity … Sometimes we have electricity, but central heating might disappear or be at minimum due to old utilities and damage after the Russian attacks on infrastructure. I do not complain, I am still in my home unlike many Ukrainian citizens who are now refugees or Ukrainian soldiers who are defending us and our freedom despite severe conditions on the battlefield.” She goes on to express thanks for the portable heater she received: “With gratitude and best wishes to you and hope for the nearest victory and end of the war.”

Below is the story of another grateful recipient, whose gift came from Congregation Beth Elohim in Brooklyn, New York.

I remember my mom and I lived on the outskirts of Kyiv when the Nazis occupied the city. I was 10 years old at the time.

I remember one night my mother brought home some strangers—a woman, a boy my age and a little girl. I had my own small hiding place in the cellar of our house, where I loved to play. Mom said that these people would stay there for a while now. “You can’t tell anyone about them, it’s a secret,” she told me. I remember at first I was very upset because my mother put a few toys I had down there in a box and moved it to our bedroom. Mom put a mattress in the cellar,  and our unexpected guests settled in there.

I’d noticed that they never left the cellar during the day, only at night. Of course, I was bursting with curiosity, and one day I peeked in and started asking questions. The children said their names were Yasha and Bella. They used to live in the Kurenevka district of Kyiv, and now they had to hide because there was a war, and all their neighbors and relatives had been “taken to Yar” and never came back. (Babyn Yar was a ravine in Kyiv and the site of massacres carried out by German Nazi forces.) They had been hiding at the Kurenevsky Market, where my mother saw them and brought them home. Yasha, Bella and I became friends. Often at night we would talk and play for a while in the candlelit cellar. They stayed with us for months.

Trucks full of soldiers often passed by the house. Local politsai (police) visited us several times. They were rude, snooped around and threatened my mother. One night my mother put some food and blankets into a sack, brought our “guests” out through the back gate and told me to say goodbye. She said that she borrowed a horse and carriage from the neighbor to supposedly haul the firewood in. She was out all night, returned in the morning and said that our guests were safe. She had taken them to a secluded village, Gorenka, to stay with her cousin. When the war was over,  she told me that the woman and her children were Jews who were fleeing the Nazis.

Recently, when there were power outages because of Russian attacks on Kyiv, I was sitting in a room lit with a lantern given to me by Helen, and I thought: This light is from Yasha and Bella to keep me safe.

“Light is to darkness what love is to fear; in the presence of one the other disappears.”

Those words by author and political activist Marianne Williamson, which I quoted in an early Kyiv Diary entry in March of last year, continue to describe the spirits of Kyiv residents.

Editor’s Note: If you’d like to get in touch with Helen, please email editor@momentmag.com.

From the Newsletter | Holocaust Remembrance Day: Recall, Engage and Preserve. But Reimagine?

As the number of survivors shrinks, their experiences can be preserved, as new innovations allow us to hear those we’ve lost.

END_OF_DOCUMENT_TOKEN_TO_BE_REPLACED

Who Will Replace the Last Eyewitnesses to the Holocaust?

Programs use storytelling and technology to allow students to be “second witnesses” to the Holocaust.

END_OF_DOCUMENT_TOKEN_TO_BE_REPLACED

Why Were 99 Percent of Holocaust Murderers Never Prosecuted?

“If the man on the London bus was the impetus for committing to make the film, this man in his prized, hateful jacket validated that commitment.”

END_OF_DOCUMENT_TOKEN_TO_BE_REPLACED

Guardian journalist Jonathan Freedland, author of The Escape Artist: The Man Who Broke Out of Auschwitz to Warn the World joins former CBS News correspondent and Moment contributor Dan Raviv for a conversation about the heroic efforts of Vrba and why his report did not achieve its goal—of ending the Nazi slaughter of the Jews.

END_OF_DOCUMENT_TOKEN_TO_BE_REPLACED

Accepting Moment’s Women in Power Award, Ambassador Markarova spoke about the importance of ongoing U.S. support for Ukraine, the challenges of serving in wartime and what it’s like to work with President Volodymr Zelenskyy.

END_OF_DOCUMENT_TOKEN_TO_BE_REPLACED

American synagogues are stepping up to the plate to help Ukrainian Jews get crucial supplies during this time of war and winter.

END_OF_DOCUMENT_TOKEN_TO_BE_REPLACED

Kyiv Diary 11/4/22: Even Without Electricity, Kyiv Has Power

END_OF_DOCUMENT_TOKEN_TO_BE_REPLACED

Kyiv Diary 10/10/22: The Missile Blast In My Neighborhood

On Monday, I was doing exercises on my balcony when our Kyiv neighborhood was rocked by a thunder-like explosion from a Russian missile.

END_OF_DOCUMENT_TOKEN_TO_BE_REPLACED

“I hear stories about the horrors of the war, and it makes my skin crawl,” says Vermuteria’s owner, Svetlana.

END_OF_DOCUMENT_TOKEN_TO_BE_REPLACED

During the darkest days of the invasion, Anya and her daughter left Kyiv with no particular destination in mind.