Many Jews born and raised in Ukraine are fighting together with their fellow citizens, along with volunteers from more than 50 other countries. They stand united against the Russian invasion. Before the war, members of the Ukrainian Jewish community were involved in everything in Ukraine, including the government and business. And  of course, nowadays they are involved in the army. 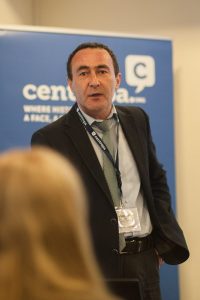 One of many Jewish defenders of Ukraine is Maksym Gon, 56, who is a professor at Rivne State Humanitarian University. He has a Ph.D. in political science and is the author of more than 200 articles and research works and several books. Maksym did not volunteer; he was drafted. Unlike many others, Maksym could have made use of  an exemption from the draft due to his status, which had already been issued by the university. But he made a different choice. Along with others, he was put on the train to Dnipro, and afterward all of them were taken by buses to the front line in Donbas.

I spoke with Maksym via WhatsApp and emails. His decision to join the Army, Maksym told me, was predetermined by the very fact of the military aggression of the Russian Federation against Ukraine. For more than a dozen years, he said, he had been teaching students what civic duty is, and for him, those words have a profound meaning. In addition, Maksym is convinced that those whose hair has already turned gray should be the first to go to war and not the boys who are just beginning to live. “We defend our right to freedom in the broadest sense of the word. We do not want to become an internal colony of the empire again; we do not want to return to the totalitarian society that modern Russia is,” says Maksym.

His wife supported his decision, but they both didn’t want to worry their daughter, who on the eve of the aggression flew with her husband to Egypt on vacation and then ended up as a refugee in Poland. The “legend” of the first weeks was that Maksym was volunteering, always on the road, and could rarely be reached. This went on for some time, but eventually, Maksym’s wife told their daughter the truth. Despite all the fears, he said, the family understands that it was the right thing to do.

Growing up in the late 1960s and early 1970s in the city of Rivne, in the Western part of Ukraine, Maksym had no experience with Judaism. His parents, brought up under the Soviet regime, were both atheists.

Yet he knew that he was Jewish. Once his father showed him a book about the Nuremberg trials. There was a part describing the execution of Jews in the town of Dubno, not far from Rivne. This was how his father explained to Maksym, at that time a high school student, that he had  Jewish origins. And he also remembers how his brother reprimanded him when he learned that Maksym was ashamed of his Jewish roots (to be a Jew in the Soviet Union was not considered something to be proud of). 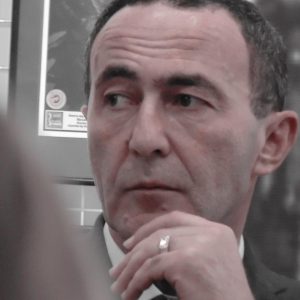 Maksym told me that his Jewish identity is far from a determining factor in his decisions and actions. He is among those who oppose the aggressor for a simple reason: because he wants  his daughter, his relatives and the citizens of Ukraine as a nation to live in a democratic society. The war crimes committed by the aggressor’s army are an equally important motivation  to be at the front. Bucha has become a symbol of the Russian abuse of human rights. Jews and non-Jews are all united, he says, in defending their homeland from a terrorist state for the right to have a future as an independent nation. “All of us in the Army, like the citizens of Ukraine as a whole, will be strengthened in the understanding that independence is not just a word from the dictionary,” says Maksym. “Independence is a prerequisite for a country with numerous ethnic groups and different faiths to belong to their communities. Including, of course, Jews.”

Maksym didn’t vote for Volodymyr Zelensky because he did not like his populist slogans during the election campaign. However, Zelensky’s victory, he feels, signified that Ukrainian society had reached a level of democracy when it could support any candidate, regardless of his origins or religion. In Maksym’s words, “Zelensky has tremendous support. This determines the next challenge: With what image and political portfolio will he complete his tenure? On this, I am sure, the collective image of the Jews in modern Ukraine will largely depend.”

Although Maksym has thought about leaving the hot spot where he now serves because of physical and psychological fatigue, and because the prospect of dying or becoming disabled is frightening, he is determined to stay until the end of the war. “I understand that someone else will have to take my place. It will not be easy for him either, and his relatives will be waiting for him at home as mine do. That’s why I’m not leaving the front lines.”

For Maksym, leaving the front means being wounded or killed. But he has many plans for the future, including being back in the university auditorium when the war is over because he still has a lot to say to the youth. He also wants to write a book about his experiences in the war.

“I hear stories about the horrors of the war, and it makes my skin crawl,” says Vermuteria’s owner, Svetlana.

END_OF_DOCUMENT_TOKEN_TO_BE_REPLACED

During the darkest days of the invasion, Anya and her daughter left Kyiv with no particular destination in mind.

END_OF_DOCUMENT_TOKEN_TO_BE_REPLACED

A true survivor of a tragic life, Mila has to live through the war alone, either in fear or in isolation.

END_OF_DOCUMENT_TOKEN_TO_BE_REPLACED

On July 11, the U.S. Department of State released a report condemning Moscow’s attempts to justify the brutal invasion of Ukraine under the pretext of “denazifying” Ukraine and its government.

END_OF_DOCUMENT_TOKEN_TO_BE_REPLACED

Rabbi Reuven Stamov’s goal is to create an atmosphere where Jewish people can feel comfortable and united despite the war.

END_OF_DOCUMENT_TOKEN_TO_BE_REPLACED

Ukrainians have missed socializing and crave physical togetherness, even if we are already united by spirits and beliefs.

END_OF_DOCUMENT_TOKEN_TO_BE_REPLACED

Kyril used to be an in-demand TV show stylist creating outfits for Ukrainian celebrities—now he’s scrambling to get fabric for military uniforms.