I’ve just come home from the synagogue. (This time, there were no more guards with Kalashnikov guns.) I went there because at seder I met an amazing and (in my opinion) heroic lady, Rachel, and I wanted to talk to her again. She is an Israeli citizen, originally from Chernihiv, which was severely damaged by the Russians. 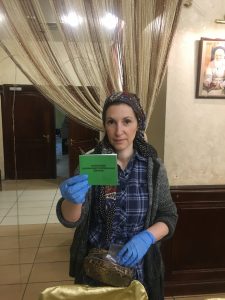 Rachel immigrated to Israel with her parents in 2006, when she was still a teenager. But her parents had difficulties adapting to the new life there and the family returned to Chernihiv. When she was 21, she went to Israel again, this time on her own. She lived in Jerusalem for four years and practiced Judaism, which was impossible in Ukraine during the Soviet era. Rachel’s mother’s illness forced her to return to Ukraine to take care of her.

Rachel is married to a religious Jew from Kyiv, where she moved after her mother passed away. Before the war, her husband owned a real estate business, and Rachel taught Hebrew. When the war broke out, the schools were closed and the real estate business became nonexistent. Under martial law, no real estate transactions can be made. Both Rachel and her husband were out of jobs and had no source of income.

Rachel loves teaching, but even now many of the city’s schools, which have been closed for in-person classes since the first day of the invasion, conduct their classes online, sometimes only sporadically. Many students and their families have left town, joining schools elsewhere in Ukraine or Europe. Officially schools reopened in April, but only a few of them have actually held any classes. Attendance levels have been paltry.

Within the first week of the war, Rachel signed up for Territorial Defense Forces, the official name for volunteers who are selectively chosen for the special city-defense units. Because she is a certified nurse—she got a degree in healthcare before she became an educator—she was placed in a hospital helping the wounded. However, volunteering didn’t financially contribute to the family. Rachel says that she was constantly scared for her three children: two teenagers, a daughter and a son, and a six-year-old boy. She was afraid they wouldn’t have enough to eat. There was no money, and the shelves of the grocery stores offered slim pickings. 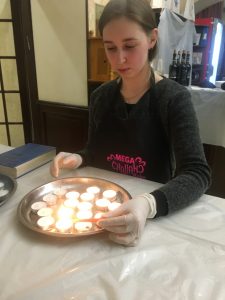 have been a refugee since she is an Israeli citizen and had deep connections with that country. Her answer impressed me. She said that when one escapes a war leaving everything behind, you become a refugee regardless of your citizenship. Besides, she added, her heart belongs to Ukraine. That is where her ancestors are buried. She can visit and take care of their graves; that is where her roots are.

She went to the Brodsky Synagogue for help. Not only did she receive the assistance she was desperate for at the time, but she also stayed there to help others. Now she is a leader of the group of volunteers, and the synagogue provides both Jews and non-Jews in need with clothes, food, medications and even pet supplies. Rachel is in charge of the humanitarian help that the synagogue organizes. She also cooks for Shabbat and other holidays.

Yesterday was Shabbat, and I watched her older daughter lighting candles. I was really touched. Even those who have never prayed do so now. For the independent and free Ukraine foremost, but also for life to go back to normal.

END_OF_DOCUMENT_TOKEN_TO_BE_REPLACED

From the Newsletter, History, Jewish World

From the Newsletter | Frozen Russian Tanks and Rockets’ Red Glare

Marking Ukraine’s 31 years of independence and six months of war waged by Russia, we look back on our coverage.