At the beginning of the war, the streets of Kyiv looked deserted. The restocking of groceries was pitiful. Lines to pharmacies were enormous during the freezing cold months of March and April. Kyiv, the capital of Ukraine, reminded me of footage from horror movies. Walking along the abandoned streets and closed stores, I never doubted that Kyiv would prevail, but I was always wondering how the city would come out of this horrendous war. Now, I see more people on the streets. Locals are coming back. However, I wonder how many businesses will not recover. 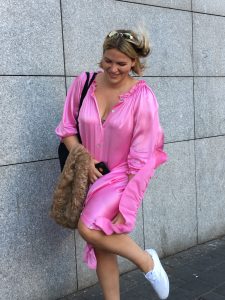 I want to tell the story of my friend Kate Zubarieva, now 33, who is a co-owner of Sleeper, a leisurewear fashion company. Leaders like Kate inspire Ukrainians and reinforce their belief in an independent and free Ukraine.

Being a Jew, I’m proud that among those who strive to move forward are companies led by Jewish women, and what incredible things they do for Ukraine and how their Jewish identities impact their decision-making in this most challenging time.

Sleeper is an internationally known fashion brand that was launched in 2014 when the revolution was roaring on Kyiv’s streets. The founders, Kate Zubareva and Asya Varetsa, made Forbes’ 2019 Europe “30 under 30.” They were featured in various prominent fashion publications and, just recently, in an article in The Times. Today Sleeper garments are available worldwide and its collections are sold in Galeries Lafayette Champs-Élysées, Net-a-Porter, Saks Fifth Avenue, Goop and many other stores around the world.

Kate turned to her Jewish origins three years ago when she joined the Masorti Olami community led by Rabbi Reuven Stamov. She says that joining the community was the best thing that happened in her life and brought her closer to her heritage and faith. She celebrated this Passover with friends from the community, which she says gives her strength and hope in these horrendous days of the war. She has been studying Hebrew for a year and a half now. The classes were on hold due to the war, but they have recently resumed online. 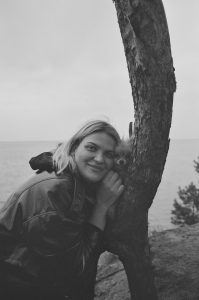 Just before the war began, Kate and co-owner Asya Varetsa helped to relocate many of the company’s employees and moved part of its production to Turkey. The company resumed operations two weeks into the war. None of Sleeper’s employees have lost their job due to the war.

In the first month of the war, Sleeper made a donation of $35,000 to the Ukrainian Army. In April, Sleeper usually supports Autism Awareness Month. This year, the owners decided to give funds to children who have suffered from the war and donated $20,000 to a children’s hospital in Kyiv.

Kate insists that an important Jewish value is the value of life. “The wisdom of our sages and great Jews, in particular Golda Meir, helps a lot,” she says. “I often re-read her biography, and her quotes, because this is something that we can firmly lean on. I know that everything will be fine with Sleeper, and even more so with Ukraine. With our employees scattered throughout the world, we might not be geographically together, but we continue to be one. This is a very Jewish belief.”