Yesterday, my friend Victoria and I decided to take the subway. First, there were the police checking our documents. With our foreign passports, we were asked a lot of questions, and the line to enter the subway, long as it was, became even longer. My American passport caused quite a commotion, but eventually we were let in.

Most of Kyiv’s subway stations are very beautiful, especially the older ones in the center of the city. The trains used to run frequently (at three-minute intervals on average) and regularly. Also, the stations in the center are quite deep because they were built as bomb shelters and were used that when Kyiv was under shelling.

But when we got down to the tracks, the beauty of the station was impossible to see; that’s how overcrowded it was. I told my friend that this was a good sign, meaning that the next train would be arriving soon. There were so many people waiting, so the last train probably left a while ago. Little did I know!

Twenty minutes later the next train arrived. By that time, both of us felt as though we were packed like sardines. We managed to get on the train, but there was no room to stretch, move or even breathe. We needed to travel only two stops. What a relief it was to get out onto the street! 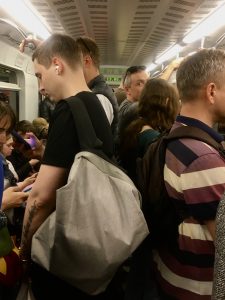 We accomplished the mission at our destination and courageously decided to return to the city center using the subway again. But traveling in the opposite direction was a completely different experience. Though we still had to wait for a train for more than 20 minutes, the station wasn’t crowded. We could actually sit on the bench while waiting.

Sitting next to us was a young girl, Masha, with a beautiful husky dog. The girl told us that she actually was a cat person, but this dog was abandoned by its owners, who had fled Kyiv, and seeing this dog on Instagram she decided to rescue it. There are special Instagram pages—@obnimi_sobaku and @obnimi_kota (which translate to “hug a dog” and “hug a cat”)—for pets that are in immediate need of a new home. And the dog’s owners had placed the picture of her new friend Ryzhji (“Redhead”) on this Instagram feed. A truly beautiful husky dog!

Masha told us that it was very difficult to make friends with Ryzhji, who doesn’t listen to her much and obviously misses the former owners. Being a big and strong dog, Ryzhji often pulls Masha in a direction she doesn’t intend to go. Masha thinks that there were children in the family where Ryzhji used to live because every time a child appears (particularly if it’s a boy around five or six), the dog rushes toward them with extraordinary force.

This happened during our conversation. When a mother with two children, one of whom was a young boy, came to the platform, Ryzhij ran toward the kid—dragging Masha, holding the leash tightly, in tow.

I can’t stop being amazed at how many virtues the war has brought out in people. In times of war, goodness reawakens. War uncovers all that is threatened, abused and ignored.

The greatest enemy of war is peace, and we fight with kindness, openness, persistence and compassion.