Life in Kyiv changed tragically over a month ago, but lately things seem to feel somewhat stable. Soldiers, territorial defense forces and the police continue to defend the capital. The city’s infrastructure is operating: utilities, transportation (not on a regular schedule, of course, and central subway stations operate only as bomb shelters now), a few medical facilities, and rescue crews are all on duty. Almost 1,000 babies have been born in the capital since the war broke out. Yet the city looks deserted. I see only a few pedestrians here and there, and most of them are taking their dogs for a walk.

We can still hear the sounds of the sirens quite regularly and rather loudly. It feels surreal that the war started in the winter and we are almost in the middle of the spring. And especially considering that March was cold and snowy, we’d like to keep the windows open and let the fresh spring air in. But it’s like a bad omen: As soon as we open the windows, the sirens start to sound. So most of the time we keep our windows closed. We get fresh air when we go foraging for groceries. Now we call it hunting. 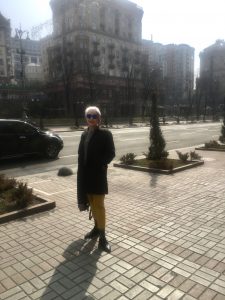 We went on such a hunting expedition yesterday. Before the war, occasionally we went to Silpo, the premium store of a major chain of supermarkets, because it had always been better supplied with a variety of products, such as exotic fruit, that we had never even seen before. I called this store the Museum of Gourmet Foods. I could only compare it with Dean and Deluca in New York, which I frequented when we lived there. And this comparison goes for both the assortment and the prices. The difference is that Dean and Deluca shuttered all its New York City stores and Silpo is operating.

At the beginning of the war, we assumed the Museum of Gourmet Foods, at least its central location in the luxury shopping mall Arena City, was closed due to martial law. Its front entrance was barricaded and we were venturing to the farther away and less sumptuous Silpo location. And it was not fun. The shelves were almost empty, the products in disarray, the lines long.

But accidentally we found out that the main Le Silpo location had been operating all the time; you just had to go through the underground garage and voila! It is not anything like it used to be in the pre-war times, but it’s definitely heaven compared to other stores. Many small stores nearby are closed either due to the lack of employees or restocking problems. 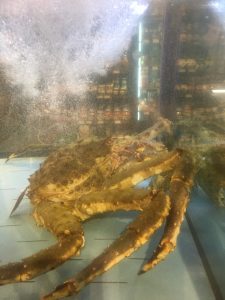 Since our discovery that Le Silpo is open, we have been there twice: last week and yesterday. The prices that were high even before the war have increased. Not all counters and shelves were filled, but lobsters, crabs, oysters and an assortment of cheeses and sausages were available, among other offerings. However, there were more lobsters than people in the store. Even at the bread counter, I saw just one other person. I think that most people couldn’t afford Le Silpo before the war, but since the war began, they have drained their savings or became more frugal spending money since the future is uncertain. I’d rather say that the future is certain, meaning the victory over the Russian Army. I have not met a single person who doubts it. However, what is unknown is how long this war is going to last, and in what state Ukraine will come out of this horror, and whether it will be for good.

So our foraging was successful, but at the same time very sad. It’s troublesome when the food is supposedly for people, but they are not there to purchase it.

I think I miss the lines.