Kyiv Diary 4/21/22: The Animals of Ukraine Are Also Suffering 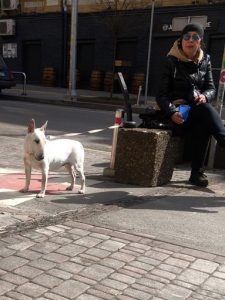 Yesterday I met our neighbor from around the block, Maxim, and his mother. He was walking a dog, as we have seen him do many times, but this dog looked different—the same breed and color, but different. We stopped to chat, and he told us that part of his family had left Kyiv for Western Ukraine, and his dog had gone with them. But Maxim was dogless for only five days. This was his new dog, Cleopatra. After hearing on the news about all the horrors that animals had experienced in Bucha, he responded to a call on Instagram to save the homeless pets.

The atrocities committed by the Russians, who attacked not only people but also animals, are beyond comprehension. In Bucha, many dogs were killed by Russian soldiers on the streets. And it is no wonder there are so many homeless animals, whose owners were either killed or forced to leave to save at least themselves.

When Maxim brought Cleopatra home, she was hungry, dirty and lonely. It took him days to wash out the shrapnel and pieces of glass. Maxim was told that when the dog was found she was so exhausted that she slept right on the broken glass. Maxim took the dog to a vet, and now his new four-legged friend is recovering. 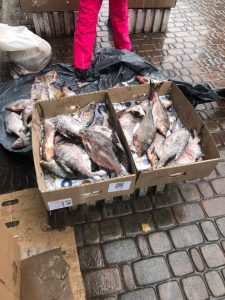 I wish all unfortunate animals from Bucha, Irpin, Gostomel and other towns had such happy endings to their horrible stories.

On our way home we saw elderly people standing in line for humanitarian aid at the small café nearby. The line was quite long, but it was moving quickly; some kind of river fish was being given away. It might not be gourmet fish, but it was fresh, and fresh fish is not available in any supermarkets, so it’s a treat. I was touched when I realized that these elderly people were smiling and chatting with each other, despite the cold and the rain.