When I first arrived, I saw rows and rows of seder packages in the hallway. Soon, these packages would be distributed to the elderly, the sick, and even members of the military to ensure that everyone who could not access a traditional seder would have the opportunity to fulfill the Jewish obligation of eating matzah on the first and second nights of Passover. Some Jewish soldiers in the hospital will also get special seder kits, along with Jews who are in territorial defense and other non-life-threatening locations. 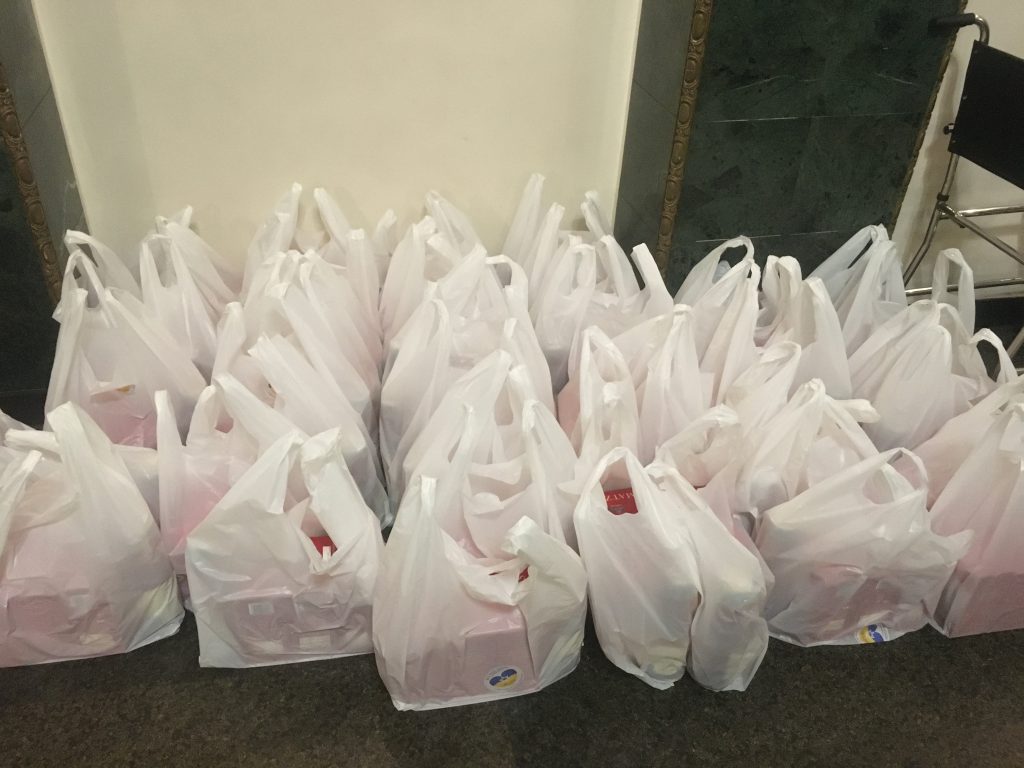 The seder was scheduled to start at 8:30 p.m. in a big, well-lit dining room. The kitchen was adjacent to the dining room, and there I met a few women; only one of them was Jewish, which surprised me. The non-Jewish women have been volunteering in the synagogue since the war started. They are all religious Christians, and they were talking about the forthcoming Orthodox Easter on Sunday, dyeing Easter eggs and baking paska (an Easter bread).

I asked them why they were here in the synagogue rather than the Vladimirsky Sobor, the main Orthodox Church in Kyiv. “We wanted to help,” they told me. “The Sobor doesn’t host evacuees, doesn’t try to take them to safer places. We know that there is a lot of work in the synagogue and that help is needed. So when the synagogue hosted more than 300 evacuees from the embattled city of Chernihiv—Jews and non-Jews—we were there. People needed help, and we could provide it.”

All my young life in Ukraine, I felt that we Jews were very much separated from other non-Jewish Ukrainians. This was the first time that I felt a sense of togetherness—and realized that the togetherness will last.

The only Jewish woman I met was a woman named Rachele. She runs the synagogue’s kitchen; she also serves in the territorial defense, teaches Hebrew school and manages a family of five. Rachele and her children were the only family present. She said that the synagogue was expecting 150 people tonight, but no families. Most attendees were elderly Jews who couldn’t leave the country or didn’t want to. I asked Rachele how she interprets the words “next year in Jerusalem,” traditionally used to conclude the seder. “They mean that it was our choice to stay in Kyiv to help our city and country get independence,” she said. “I believe that next year we might be in Jerusalem as free people. I don’t see why not.”

I also asked Rachele if she feels that non-Jewish Ukrainians are accepting of Jews. “All my children are in regular schools where they have never been at a disadvantage because they are Jewish,” she said. “On the contrary, all Jewish traditions they observe are respected. Our rabbi is indeed a people’s hero. Our president is Jewish, a defender of Ukraine. The face of Ukraine today is the Jewish people.”

Another guest, Sander, chimed in, saying that when we fight for Ukrainian freedom we all have to be united. During the Russian invasion, I asked him, does the rhythm of Jewish holidays add stress or relieve it? “We Jews have been through a lot,” he said. “We always follow our traditions and celebrate our holidays, and then we deal with our pains and stress.” 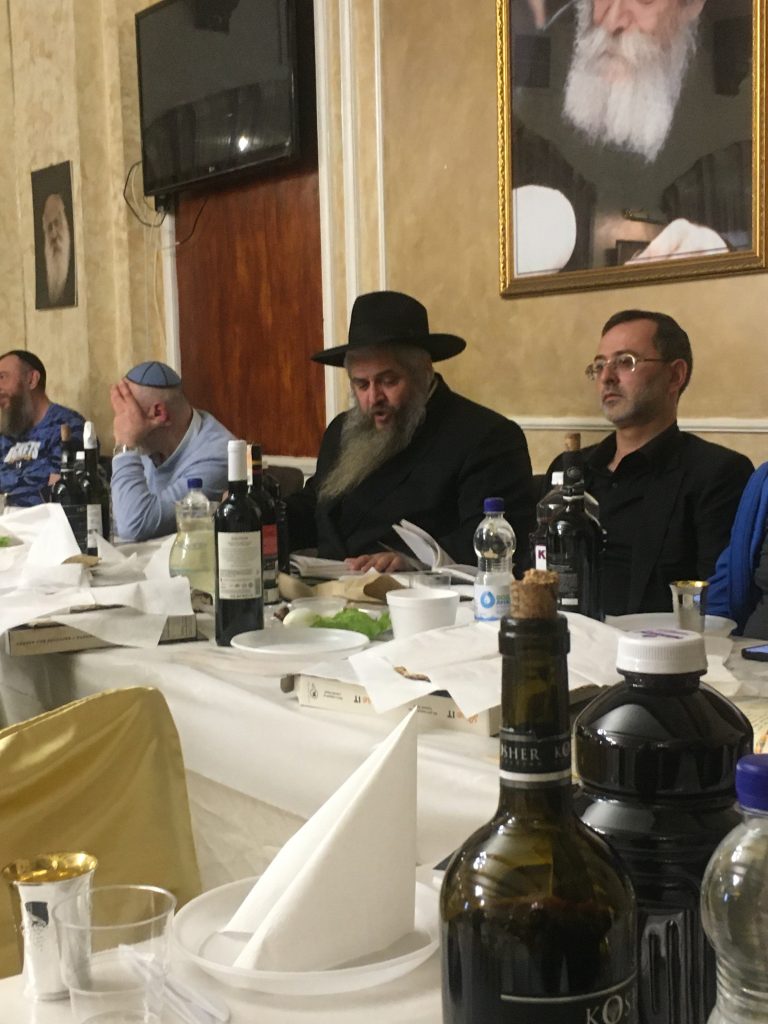 Then I met two Jewish men who came from Kropyvnytskyi, several hours south of Kyiv. They told me they came all the way to Kyiv for the seder because of the rabbi, Moshe Azman. “He is a true hero—well-respected, energetic, brave,” they said. “Our local rabbi fled.” When asked whether they are here with family, they responded, “Yes, of course. We are here with the family, 100 percent. We are all one family.”

The seder started late, at 9:20 p.m.—20 minutes after curfew. I was told not to worry. Territorial defense attendees knew the password (which changes daily), and they would escort or drive me back home. Moreover, the nearby Hotel De Paris would accommodate anyone who was from out of town or who just wanted to spend the night in luxury accommodations. The surrounding shopping center and stores were closed, but the hotel would host Jews celebrating Passover for free—amazing!

When the seder began, Rabbi Azman referred to Pharaoh as Putin—seemingly by accident—which caused a lot of laughter and applause. He has a lot of character, and he fills the room with his energy. He is also a wonderful singer. Out of 150 expected guests, the final turnout was around 25, seemingly all friends of the rabbi. He knew everyone by name. 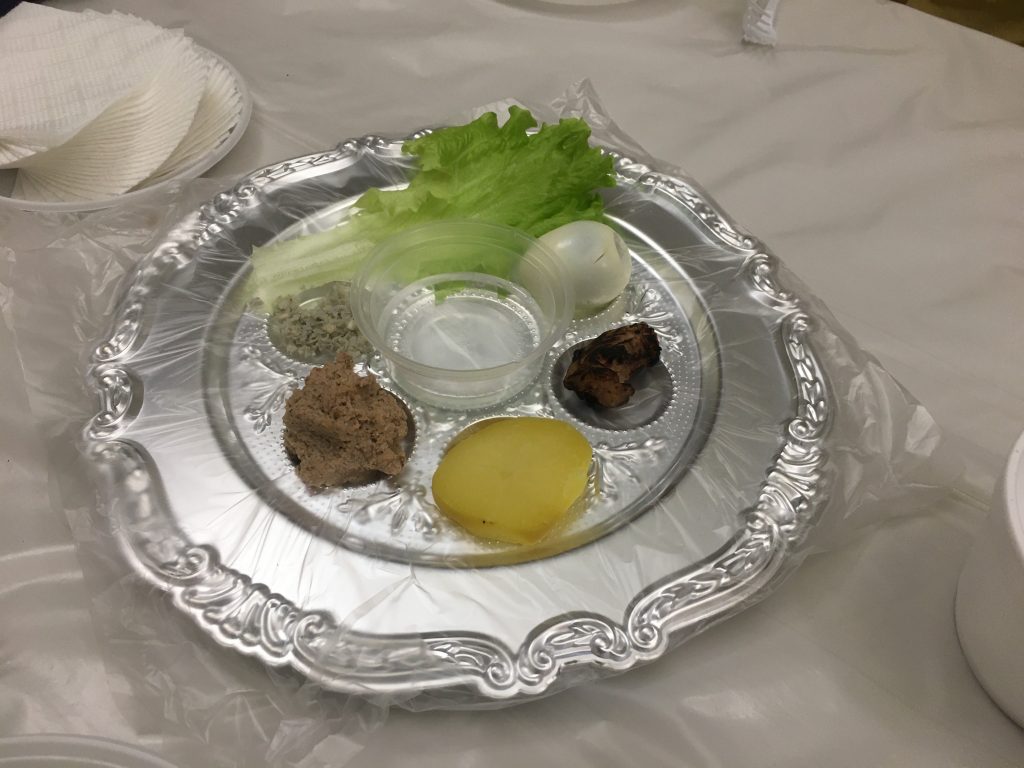 I imagined that a seder in the synagogue would be traditional, and perhaps boring—we hear the same story every year, and let’s be honest, it’s a long story—but I was wrong. Ample servings of food came and came: potato salads, gefilte fish, stew, pickled tomatoes. Volunteers acted as waiters, carrying out the food and clearing the tables. The matzah, which was from the United States, was delicious! Arguments, jokes (not always appropriate ones) and discussions resembled a pre-war celebration rather than a wartime seder. But after all, Passover is a happy holiday.

When it was time to leave I asked for a ride, and five minutes later I was home. My husband was relieved; with the country under martial law, and with the strict curfew, he was not sure how I would make it back. But I arrived home Cinderella-style—right before midnight.

END_OF_DOCUMENT_TOKEN_TO_BE_REPLACED

Kyiv Diary 4/15/22: Passover, the Holiday of Freedom, Is More Relevant Than Ever

The story of Passover is about freedom and sacrifices made on the road to liberation, and this year it seems more relevant than ever. It might as well be about Ukraine.

END_OF_DOCUMENT_TOKEN_TO_BE_REPLACED

When I met Moshe Azman, he identified himself not only as the rabbi of Kyiv’s central synagogue, but also as the Chief Rabbi of Ukraine.