I want to give English-language audiences as well as international readers a glimpse of what ordinary Ukrainians are experiencing. Despite feeling constant danger, life seems to go on. Today was the first sunny and warm day. It’s really spring. But what a strange and wild spring it is! People who remained in Kyiv have somehow acclimated to their new daily lives—many without work and many without money—and the danger seems to be in the background although everyone understands that the danger is real. Around town, pedestrians and soldiers, who are on duty guarding the city, hardly pay attention or register the occasional booms coming from a few miles away. When the war started, we would always get jolted awake at night by sirens and window-rattling caused by an odd Russian missile that landed somewhere nearby. But now, we and many people we know just opt to sleep through the air raid alerts. The topics of politics and war are certainly on everybody’s mind, and fears, though subdued, have not gone anywhere.

Yesterday, I had to go to the post office to pick up my glasses that had been repaired. It’s so nice that the repair shop sent them. I spent almost 3 three hours in line. So many people are trying to support their families who escaped Kyiv and have become refugees, and now they are dispersed in different countries without jobs or money. On my long walk to and back from the post office, I did not see many people. I live in the center of the city. Streets in the vicinity of my place used to be crowded. Now, just a few pedestrians and occasional cars pass by. Everything is closed. Only one out of ten pharmacies operates due to the lack of employees who didn’t leave the city and are brave enough to go to work. The same with the supermarkets. But what I did see, and it was almost shocking, was a hair salon with a customer. Moreover, the restaurant MILK favored by young folks was also open. It is located right across from Kyiv Central Synagogue. Of course, I went inside, and to my surprise, the restaurant was packed. 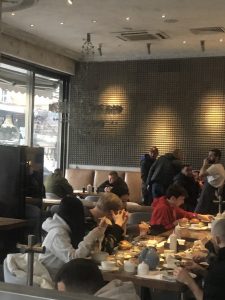 People just want to survive. So, they adapt to war. When I venture out for grocery shopping or to meet with friends, curfew permitting, I notice that even children hearing a bomb or a rocket just keep playing in their backyards or at playgrounds, swinging or building sandcastles. Those who are sitting on benches remain seated. Some people who are walking their dogs carry on at a casual pace. “We must and we will learn to live in the war, to live with new realities, whether we like it or not,” my associate Alyona told me. And I can’t agree more. 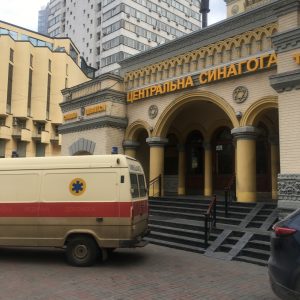 Many of my friends took up yoga as a way to stay calm. I maintain my exercise routine: pilates and stretching. With electricity on and the Internet, I can join online classes and I don’t feel alone even during curfews that last for days. There are also always Zooms with my daughter, who is in Boston, and my friends and relatives—their support is so meaningful! We watch Netflix every night after dinner as we used to do in the pre-war times.

Could it possibly be that the war has become somewhat ordinary, part of life? 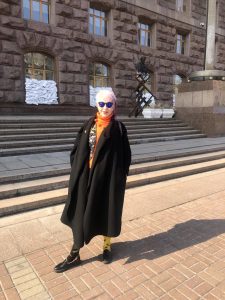