In 2017, Tanya Singer found herself in need of refuge after watching her son survive brain surgery. To cope, she turned to an unlikely source: knitting. The former general manager of a corporate media company was renewed and replenished by the healing powers of the age-old handiwork. She now never goes a day without knitting, and her husband jokes that there is not one room in their home without knitting supplies.

Eventually, Singer’s passion for knitting spurred her to join a community of knitters and, most recently, to begin a research project she calls “Knitting Hope.” She was particularly interested in researching how the craft has been practiced throughout Jewish history.

Singer says her research began two years ago after she read a Moment Magazine article titled “The Girl in the Blue Sweater” about Holocaust survivor Helena Weinstock Weinrauch. At a relief hospital after the war, Weinrauch was gifted a knitted blue sweater by another Auschwitz survivor, Ann Rothman, who instructed her to wear it on Passover every year. “That’s what started me going down this rabbit hole of mine, of knitting in the Holocaust,” Singer says.

The symbol of Singer’s project is a little red dress, which originally belonged to a woman named Judy Fliescher Kolb, whose family fled the Nazi regime. The dress is one of many knit garments she discovered through her research of handmade items that helped women to “resist, remember and renew their lives after the atrocities of World War II.” Singer’s project, Knitting Hope, has brought together about 200 knitters from all over the world who gather via Zoom to knit and get tips on how to design their own versions of the little red dress. She hopes that the dress will become a Holocaust education tool and is looking for new ways to further her research. 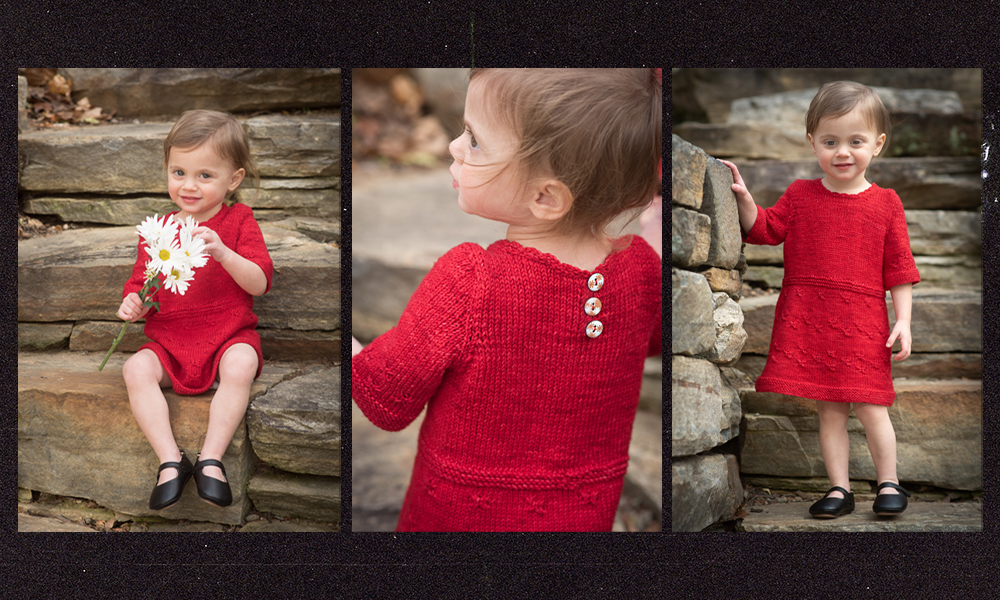 The little red dress “has a life of its own,” Singer says. “My intuition was that knitted objects would make a terrific teaching tool [for Holocaust education].” But what was even more interesting to Singer was the story behind the little red dress and the person who owned it.

Judy Fleischer Kolb, now 80, received the homemade dress from her grandmother, whom she called Omi, when she was a little girl. Her family was from Germany, but they fled shortly before her birth: In 1938, her Omi liquidated their family’s fabric store and gathered enough money to save the family (including Fleischer Kolb’s parents, Carla and Leopold) from the Nazis, purchasing tickets to the last open port in the world—Shanghai, China. 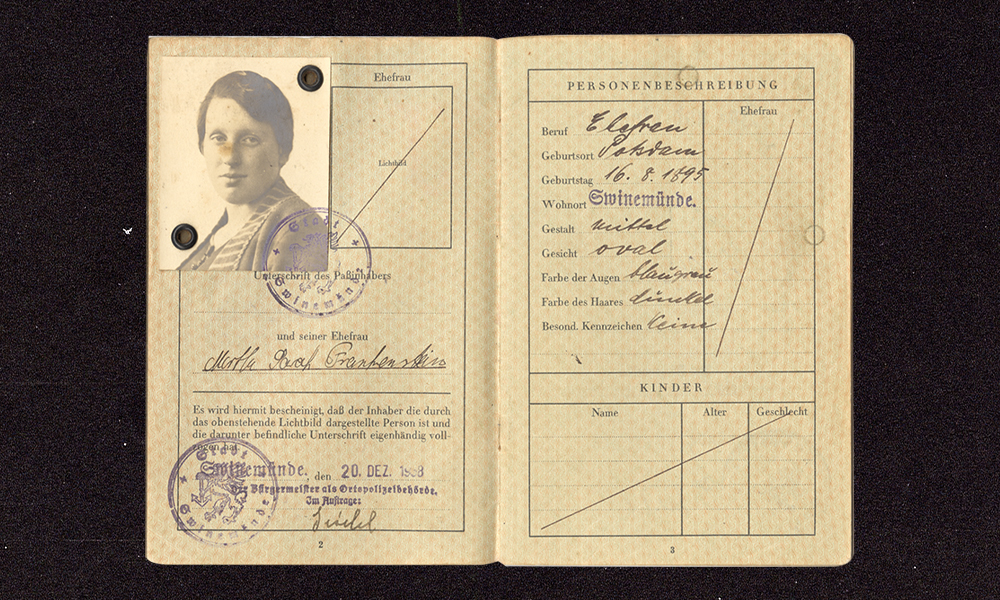 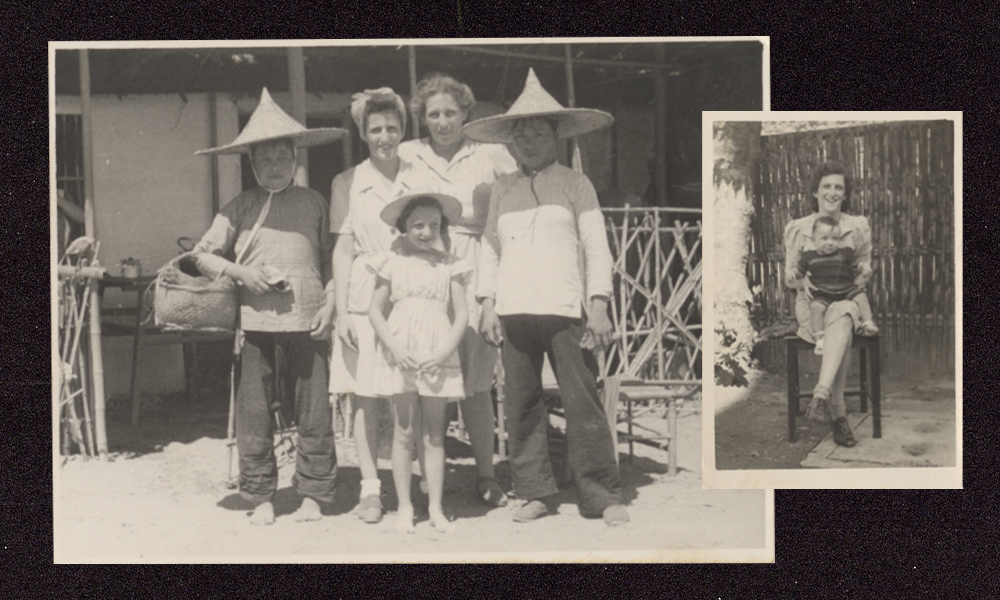 Fleischer Kolb was born in 1940 in the international settlement of Hongkew. At the time, the Chinese and Japanese were at war, and Japan occupied the port. The Jewish refugees had to follow Japanese rules and laws throughout the port. “They were just stateless refugees living in Shanghai in unbelievably terrible conditions,” says Singer. “Fleischer Kolb shared a bedroom with her grandparents, which was also the office for their transportation company.” There were some 20,000 Jewish refugees living in the close quarters of Hongkew at the time.

Fleischer Kolb lived in Shanghai for eight years until 1948, when she and her parents moved to San Francisco. She has fond memories of the bakery her uncle opened, her father’s job as a cantor and the generosity of the city’s Chinese and Jews alike. Despite the scarcity of food, she says, “Nobody went hungry.”

When Fleischer Kolb’s parents passed away six months apart, she went through their belongings and found the red dress (and a picture of herself wearing it) amongst their German papers and passports. She decided to save the dress and put it in the back of her closet. “My grandmother knitted the red dress and I’m wearing it [in a photo]. I was less than a year old. The pictures were black and white,” so the color isn’t visible. She thinks it was taken in Shanghai. Singer found this story particularly meaningful.“We can distance ourselves from the black-and-white papers,” she says, “but when you see a bright red baby dress, it’s real. These are real people. These are real children.”

Fleischer Kolb donated the little red dress to the Illinois Holocaust Museum in Skokie, Illinois, where it is on display. 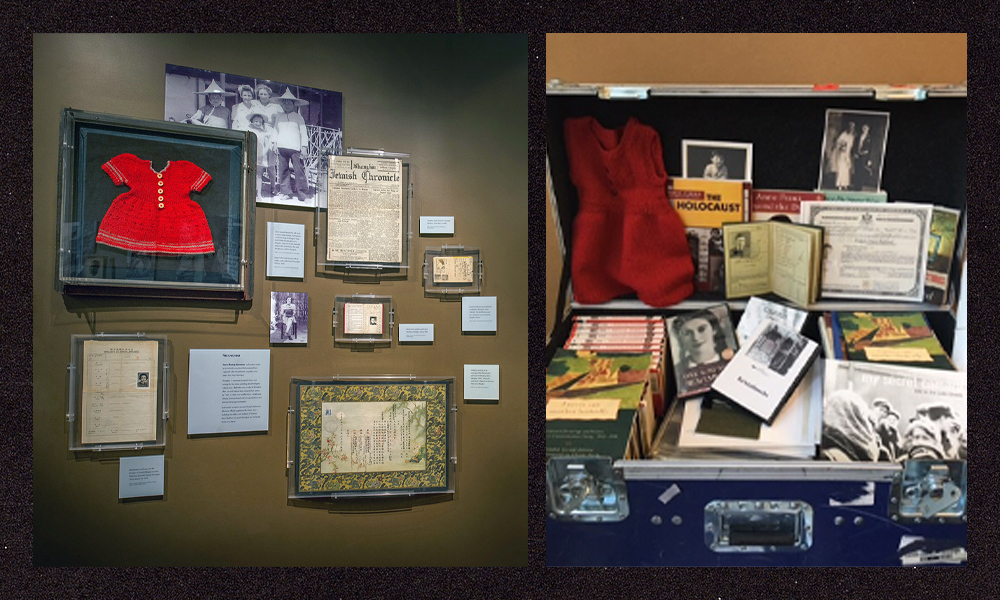 Top photo: A Teaching Trunk featuring a crocheted little red dress created by a museum docent. The trunk is part of an Illinois Holocaust Museum and Education Center program that reaches more than 1200 students a month.

This program is part of the Moment Theater Festival.

END_OF_DOCUMENT_TOKEN_TO_BE_REPLACED

Beshert | The Zoominar Did It

When I started hosting weekly zoominars for Moment at the start of the pandemic, I never could have imagined that it would bring my husband, Joe, closer to his birth mother.