Justice Ruth Bader Ginsburg was the recipient of the inaugural Moment Magazine Human Rights Award, and Moment board member Lloyd Goldman, a leader in the fields of real estate development and philanthropy, received the Moment Magazine Community Leadership Award on Wednesday, September 18, at a special dinner at The Yale Club in New York City. 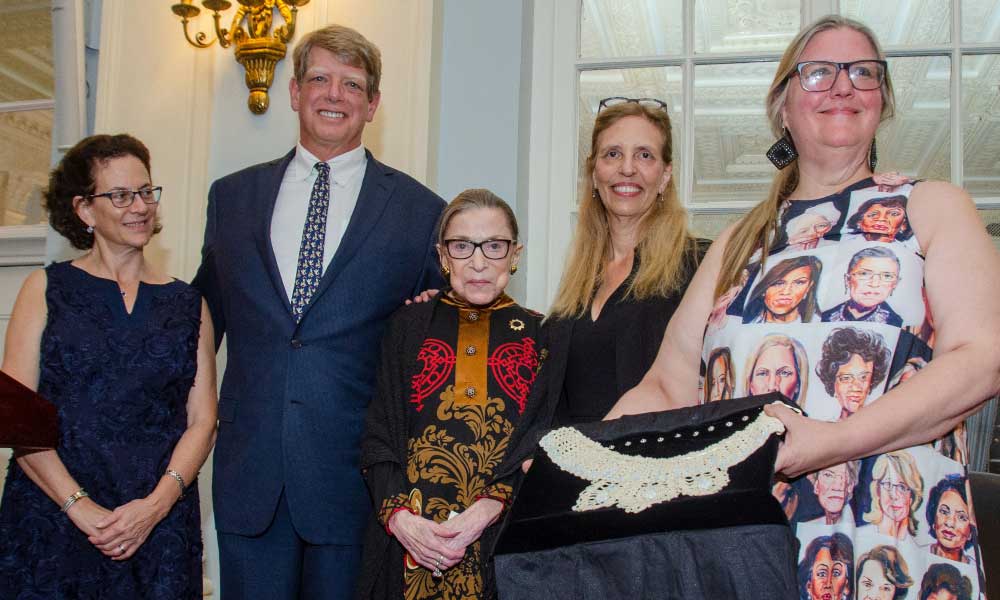 The evening began with a performance by Denyce Graves, whom USA Today has called “an operatic superstar of the 21st century,” and who appeared courtesy of the Metropolitan Opera. In addition to “The House I Live In” and “Summertime,” Graves performed selections from “Half Minute Songs,” written by 20th-century American singer and pianist Carrie Jacobs-Bond, which contain “little pearls of wisdom,” according to Graves. Some crowd favorites were “I’d rather say you’re welcome once than thank you a thousand times,” and “Ain’t it gay that what they say can’t hurt you, unless it’s true.”

During an on-stage conversation between Justice Ginsburg and NPR Legal Affairs Correspondent Nina Totenberg, Justice Ginsburg pushed back against critics who suggested she should have retired during President Barack Obama’s second term. In response to that suggestion, the Justice said she always asks the question: “Who do you think he could have nominated and gotten through the Republican Senate that you would prefer on the Court?”

Lloyd Goldman was introduced by Rivka Carmi, the former president of Ben-Gurion University of the Negev. In his remarks, Goldman noted that philanthropic causes help bring disparate groups within the Jewish community together. “I know it can be hard to discuss some social issues. But when we can support an organization that crosses so many categories that we each like to support and get a synergy between them, it is momentous.” 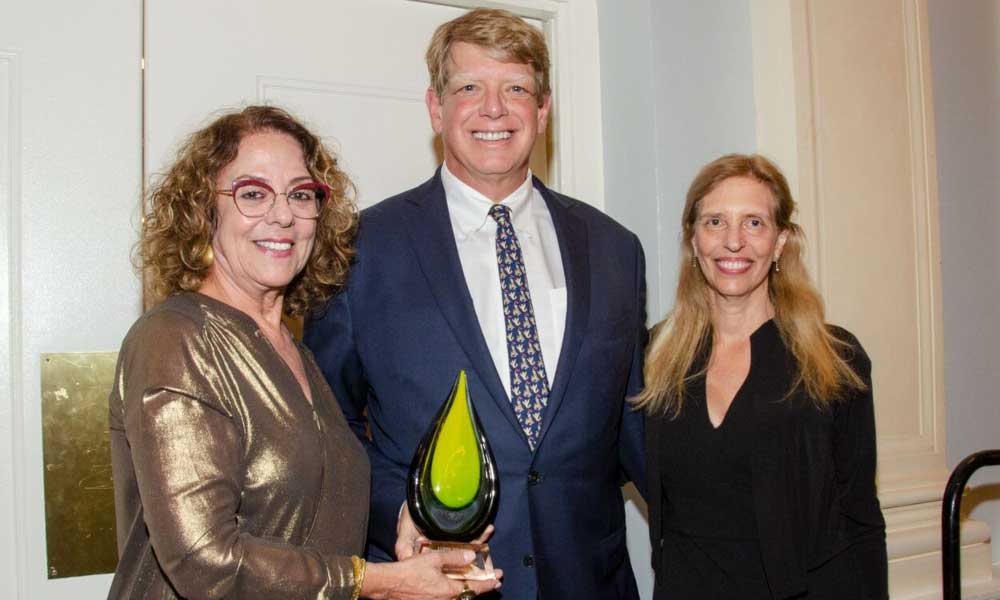 In presenting Moment’s Human Rights Award to Justice Ginsburg, Elizabeth Scheuer, chair of Moment’s board, said, “In recent years, you have come to be known as the ‘Notorious RBG,’ a nickname coined by an NYU law student playing on the rapper Notorious B.I.G., to honor your dissent in the 2013 Shelby County vs. Holder case. You have also been portrayed as a children’s literary heroine, the star of a coloring book, a tattoo and even a Halloween costume—both for children and adults! In presenting you with this award tonight, we wrap ourselves in a tiny measure of your brilliance and notoriety. It is our honor and privilege to celebrate you for your enduring commitment to gender equality, to protecting the rights of minorities and to upholding the democracy that Denyce Graves sang about: that part of America that strives to protect the rights of all its citizens.”

During her acceptance speech, Justice Ginsburg spoke of two feminists who were her childhood role models: poet and activist Emma Lazarus and Hadassah founder Henrietta Szold: “Two Jewish women, both raised in the USA, whose humanity and bravery inspired me in my growing-up years.”

In presenting the award, Moment editor-in-chief Nadine Epstein said, “Justice Ginsburg’s strength, her perseverance, her commitment to women’s rights, and her willingness to defy long-held traditions have been inspirations for me. She embodies one of the central tenets of Judaism: ‘Justice, justice you shall pursue.’” 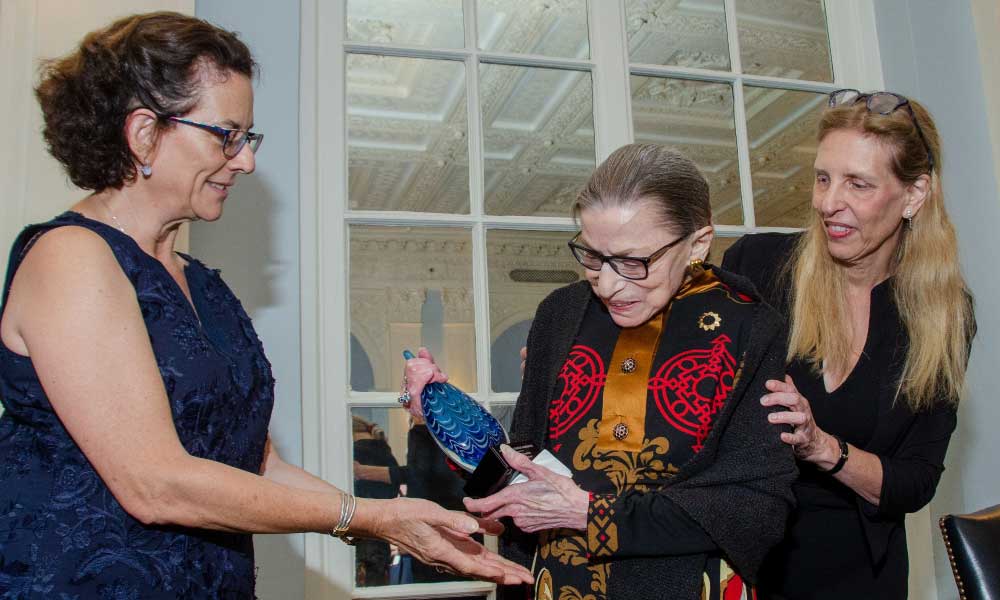 Moment also commissioned a collar as a gift for the Justice, which she wore on the first Monday in October, the opening day of the new U.S. Supreme Court term. It is named the “Tzedek Collar,” in recognition of that tenet, which in Hebrew is “Tzedek, Tzedek, Tirdof.”

“This collar is an affirmation of the foundational values on which the Supreme Court rests,” said Moment editor-in-chief Nadine Epstein. “We are delighted that the Justice chose to wear it on such an important day.”

Designed by Michigan artist Marcy Epstein, the collar honors the justice’s decades of work as a champion of human rights, particularly for women. 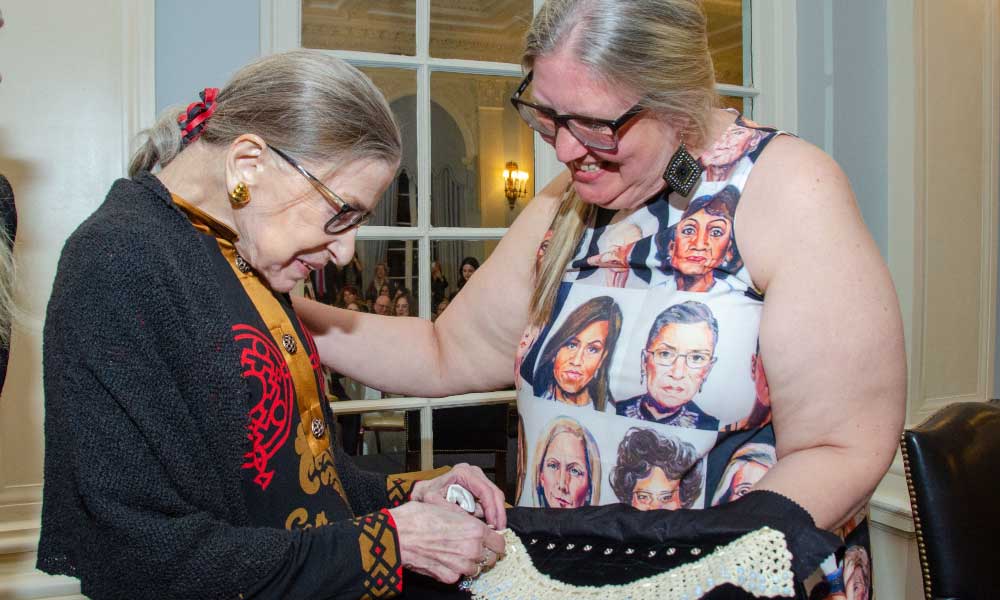 Justice Ginsburg was presented with a hand-crafted collar designed by Marcy Epstein.

“Justice Ginsburg embodies a principal tenet of Judaism: Tzedek, tzedek tirdof—Justice, justice you shall pursue,” said Nadine Epstein. “We cannot think of a more appropriate way to thank her for her perseverance and willingness to defy long-held traditions to expand rights to so many.”

The collar is a classically styled European jabot based on a late-19th-century Belgian lace design. Blue Ethiopian drop opals are intended to suggest the wearer’s composure and passion. Geometric beading along the neckline adds a Judaic design element, while the Hebrew letters tsade, dalet and kuf, which form the word tzedek, are woven in silk.

The artist teaches at the University of Michigan, Ann Arbor. Her multimedia work includes designing Judaica, tiles and tapestries. 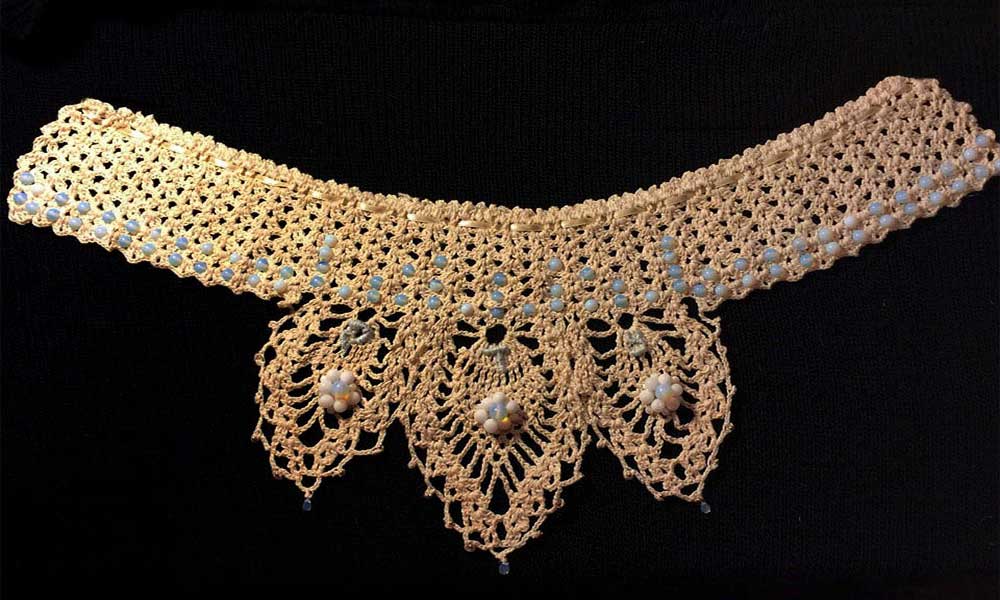 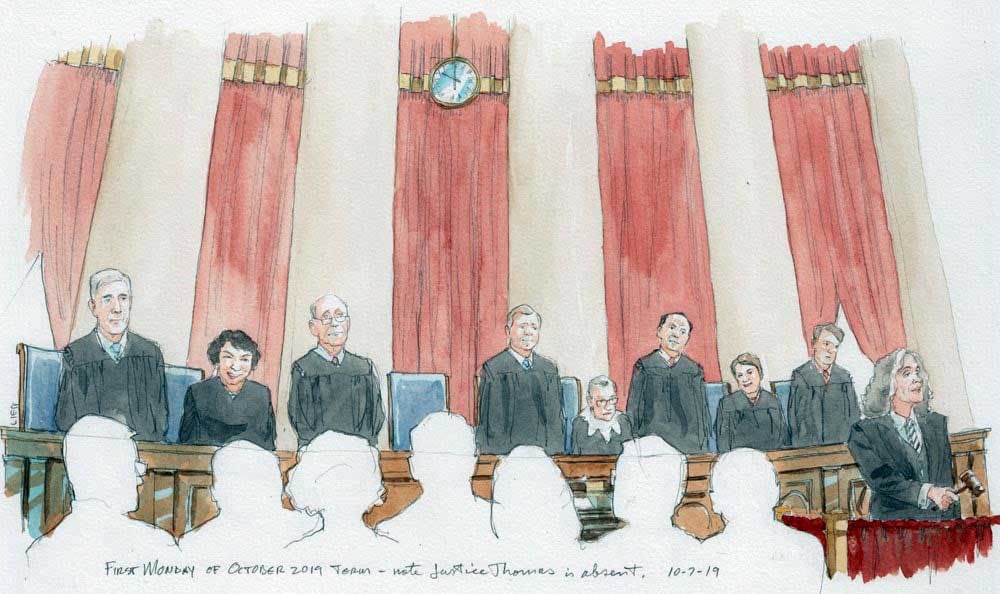 Also in attendance were singer-songwriter Regina Spektor, comedian Nick Kroll, writer and director Debra Granik (Winters Bone and Leave No Trace), Dr. Ruth Westheimer and other luminaries. Spektor, posting on her Instagram page after the event, wrote: “Listening to the wise and funny and profound and witty RBG and being surrounded by such philanthropic and active people was just what my heart needed. Going to try and take some of that wisdom and hang out with it for a long time.” 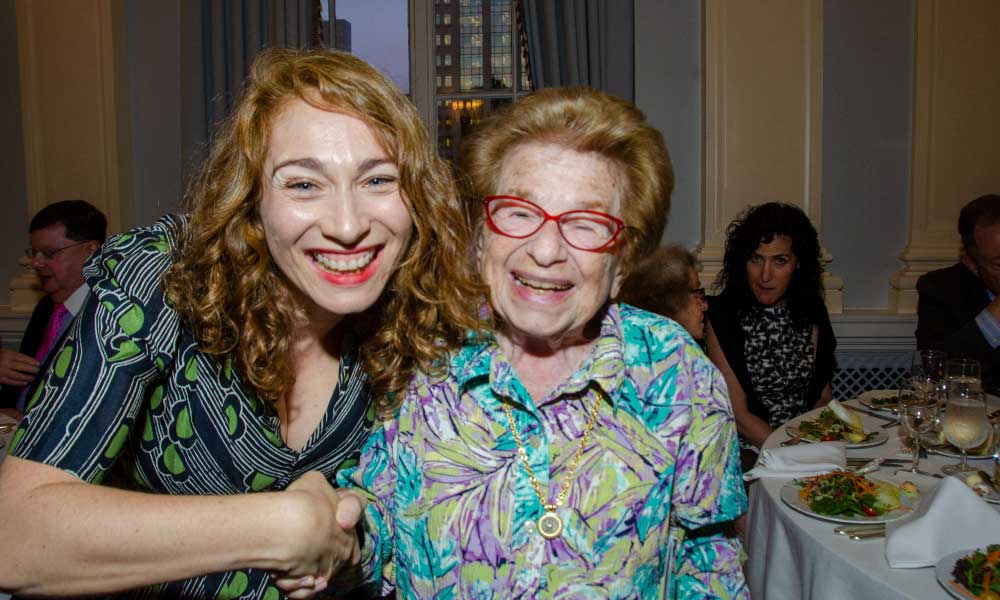 Featured, From the Newsletter, Highlights

Moment Nominated for ‘Religion Story of the Year’ and More

It’s the season for journalism awards, and we’re proud to announce that Moment is up for some exciting ones.

END_OF_DOCUMENT_TOKEN_TO_BE_REPLACED

Ruth Bader Ginsburg’s birthday was March 15th. To remember her, NPR legal affairs correspondent Nina Totenberg, author of the forthcoming book Dinners with Ruth: A Memoir on the Power of Friendships, and Moment editor-in-chief Nadine Epstein, author of RBG’s Brave & Brilliant Women: 33 Jewish Women to Inspire Everyone, will share their memories of the late Supreme Court Justice and discuss her legacy.

END_OF_DOCUMENT_TOKEN_TO_BE_REPLACED

Facebook Twitter Pinterest linkedin Telegram
This March 15th, Supreme Court Justice Ruth Bader Ginsburg would have been 88. Over the last year of her life, she and I collaborated o...

END_OF_DOCUMENT_TOKEN_TO_BE_REPLACED

“In this age of pandemics and polarization, it may be hard to envision. But it’s not a mystery. Someone who prizes decency and embodies dignity. Someone who exercises empathy and exhibits patience and understanding. Someone who lives, breathes and acts on the basic beliefs which are unique to Jewish tradition and universal in application—to pursue justice, welcome the stranger, open your hand and your heart to the needy and love your neighbor.”

END_OF_DOCUMENT_TOKEN_TO_BE_REPLACED

Tapper spoke of “men of means and power who not only treated women as prey but in all too many cases robbed these women of their dreams.”