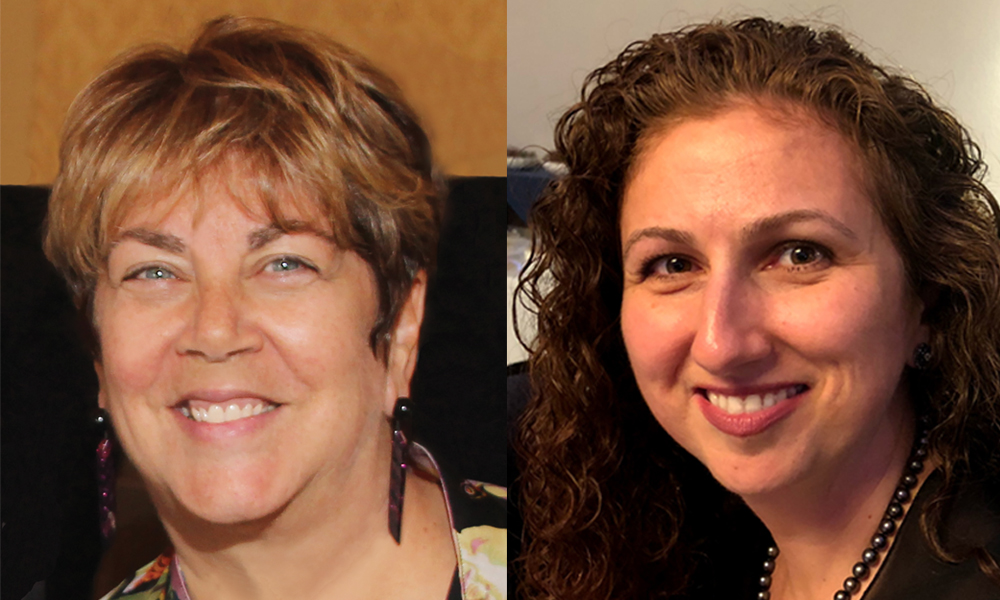 Since the launch of Moment’s Jewish Political Voices Project, the value of truth and how much consideration it should be given in today’s political arena has emerged as a consistent theme. To explore how “truth” affects voting decisions, project director Amy Saltzman spoke with two Wisconsin voters—one Democrat, one Republican—participating in the project. Hannah Rosenthal, a Democrat, served as special envoy to monitor and combat anti-Semitism in the Obama administration and was president and CEO of the Milwaukee Jewish Federation. Ruth Kantrowitz, a Republican, is an Israeli immigrant who runs seven group homes for the elderly and people with disabilities. She voted twice for President Obama before voting for Trump in 2016. Below, you’ll find excerpts and video highlights of the debate between these two smart and opinionated voters. (Spoiler alert! They do end up finding a topic they can agree on.)

Amy Saltzman: The Torah identifies truth and trust, civility and respect as the foundation of a just and fair society. Do you think our current political discourse has placed those values under assault?

Ruth Kantrowitz: I don’t think the level of dishonesty and ugly discourse is anything new. It’s probably reached new heights during the Trump administration, but I don’t think it’s unusual. What is not okay is that we have a duly elected president and people are not willing to accept that reality. People who are anti-Trump don’t even want to know about anything good he’s doing. They’re anti everything he says or does.

Hannah Rosenthal: Well, Ruth, I disagree with you. You are correct that dishonesty and disrespect are at an all-time high. But I don’t think that many of the people who are concerned with the Trump presidency just don’t like him. This is a man who believes that it is okay for the president of the United States, the leader of the free world, to call other candidates disparaging names. When he addressed the Israeli-American Council in December, he never referred to Elizabeth Warren with any name other than Pocahontas. He also said, to the vast majority of the audience who were Jews, that you may not like me, but you have to vote for me because I will help you keep your wealth, landing on an amazing anti-Semitic trope. He’s a bully. He’s a crook. He lies.

Kantrowitz: I just don’t think that prior presidents were much different. Obama smiled to your face and went right behind every Jew’s back to work with Islamists and work against the safety of Jews. So, do I agree with you that Trump is, I don’t know what the word is—?

Kantrowitz: They’re all liars. If anything, he’s brutally, ugly honest.

Rosenthal: I was in the Obama administration, and I know that he did not work with Islamists. I don’t know where you got that. My guess is from President Trump. There has never been a lie that I know of that President Obama made about anything other than “you can keep your doctor” (under Obamacare), and we couldn’t keep our doctors. Now that’s one lie in eight years, versus Trump’s 15,000 and counting in three and a half years. He says a lie and his echo chamber repeats the lie. And what we Jews learned from the Nazi minister of propaganda Joseph Goebbels was if you repeat a lie enough, you believe it and everybody who listens to you believes it.

Saltzman: If there will always be politicians who lie, how do we reconcile the Jewish ideas of emet (truth, integrity, honesty) and sheker (falsehood/lying) with support for these politicians?

Kantrowitz: I look at actions. I don’t think I pay as much attention to what comes out of Trump’s mouth or any politician’s mouth as much as I look at their actions. What I do know is that things are being done to curb terrorist acts in Israel. The embassy is now in Jerusalem. The Golan Heights is, as it always should have been, a recognized part of Israel. Here in the U.S., there are tremendous cuts to welfare programs that will force people to go to work. Things are happening that I feel should have always happened. That doesn’t mean I wouldn’t like Trump to work on not just being more honest, but also being more kind and more of a role model. I think that when kids are watching you and you’re calling other people names, it’s not a good lesson. I don’t think it’s okay.

Rosenthal: I assume you teach your kids Jewish values such as being honest, being respectful, being caring, being empathetic. I believe those are absent in President Trump. By kicking 700,000 people off of food stamps, Trump shows his lack of empathy. You’re a foster mother. You know how important food stamps are to the health and well-being of children.

Rosenthal: The people whose job it is to find fraud, to save tax-payer money, have not found this rampant fraud that you’re talking about. There are always a handful of people who will take advantage of a system. But this is literally taking food out of the mouths of children.

Kantrowitz: I disagree. I think this is literally going to force people to learn to work and fend for themselves. We have created generation after generation of people who depend on the government to feed them, and we need to stop it.

Saltzman: From your opinions on the recent cuts to the food stamps program, I can see that you both have very different perceptions of truth when it comes to policies such as welfare and politics in general. How do you define truth in your own life?

Rosenthal: I look to the science. I believe in the truth that science proves to us. I believe in investigations, unhampered investigations, that are trying to root out people who are not truthful, dishonest or commit fraud. I think truth is when people talk to each other heart to heart, and I believe that truth trumps everything else.

Kantrowitz: I have a hard time with this because so much of what we think of as truth is our perception of something, and there isn’t always science and there isn’t always concrete evidence. Some things are indisputable. If you have a picture, a recording, a receipt, something in front of you, then yes, it’s the truth. But I think that most things in life don’t come with a receipt. They don’t come with the proof. Today, if you asked me what truth is, I am honestly going to tell you that I’m not sure.

Saltzman: What about the current impeachment proceedings? Do you think any verifiable facts have been presented?

Kantrowitz: Nope. There is not a recording that we can listen to and say, “Oh my God, look at what he’s doing. He’s having another government interfere.” There just isn’t. They have absolutely no firsthand knowledge. They’re just spewing their opinion and certain people take that to be the truth.

Rosenthal: Have you read what Trump calls “the transcript?”—the notes from the call to Ukraine President Volodymyr Zelensky?

Kantrowitz: I have not.

Rosenthal: It most clearly says, “I would like you to do us a favor though.” And then he asked for an investigation into Vice President Biden and his son Hunter. Now, Trump’s allies on the impeachment panel say nowhere in that transcript is there a quid pro quo. Not only is there a quid pro quo in the written document the White House made available, but you have sworn statements that talk about the quid pro quo.

Rosenthal: If I thought Joe Biden abused his power, but I don’t happen to think that. During his time as vice president, it was the stated policy of the United States to get the prosecutor in Ukraine fired. That’s a whole different thing from I want you to investigate the guy who’s ahead in the polls who is running against me.

Saltzman: Maybe we should discuss one thing you do agree on. You’re both pro-choice. Ruth, can you explain your position on abortion?

Rosenthal: I completely agree with you, but the government does have a say and the president appoints members to the Supreme Court who determine whether you or I as women have agency to make decisions about our own bodies.

Kantrowitz: Right. So that for me was a difficult part in coming out as a Republican because I am so far left on these sorts of issues, and I had to have a deep conversation with myself about prioritizing things. Israel came out number one on my list of how I choose my candidates, so that’s what I went with. I feel incredibly lucky to not be at an age where I might need an abortion. I think what’s going to end up happening is back-alley abortions.

Rosenthal: Trump wants to punish not only the doctors but the women who abort. In this universe, it’ll be the first right, other than owning slaves, that will be taken away. And I am frightened. I have two daughters. One of my daughters has two daughters. I worry about women.

Saltzman: Ruth, given your concerns about issues like abortion and Trump’s temperament, would you consider voting for any of the Democrats?

Kantrowitz:  As it stands right now, the candidates out there are an absolute no for me. I am looking more into Michael Bloomberg, although I’ve heard statements like he bought his way into the candidacy and I don’t know enough about him. I’m not saying absolutely ‘no’ and that hands down I’m voting for Trump. I’m going to wait until the end to see what the options are.

Rosenthal: Right now, my guy is Cory Booker. And if you’ve spent any time listening to him, you will find that he quotes the Talmud and Torah when he’s making his fundamental plea for respect and civility. He is somebody who has studied Talmud for years and he shames me on how much he knows the Torah.

Saltzman: Ruth, did you know that about Cory Booker?

Kantrowitz: I did not, but I am very excited to start listening to him now.

Saltzman: Thank you both for your candor on issues that continue to divide our country and the Jewish community. Is there anything else you’d like to add?

Rosenthal: The only thing I’d add is that I love, love, love the musical Hamilton. I just brought my daughter as a birthday present to see it for the third time. It was a reminder of how our country fought not to have a king, not to have someone who deals with his private interests and makes money off of the title and who believes he can do anything he wants. So, for those who love Hamilton, remember what its message is.

Saltzman: Ruth, did you see Hamilton?

Kantrowitz: Absolutely. The King’s song, “You’ll Be Back,” plays in our house on a daily basis. It’s marvelous.

Saltzman: Well, I’m so glad we can all agree on Hamilton.