Twenty-first century Ukraine, as Marci Shore notes in her extraordinarily deft, astute and riveting new account of the dramatic 2014 Ukrainian Revolution, The Ukrainian Night, was too “heir to the grandeur” of the intentions of Nazism and Communism. She cites the novelist Taras Prochasko: “Both Europe and Russia conduct research in our laboratory. They experiment, although they have no idea what the result of the synthesis might be.” In rather different ways, of course, Ukraine and ex-Soviet Jewry to this day live with the aftershocks of these experiments. As Shore writes, “Together Nazism and Stalinism destroyed an entire world.”

Thus it seems fitting that a Jewish thread runs through The Ukrainian Night, from the barricades of the Maidan (the anti-government protests) to the aftermath of a revolution turned sour. Ukrainian Jews taking part in the revolution described themselves as Zhidobandera, an ironic, untranslatable term that mocks both the Russo-Ukrainian insult Zhid and the notion that those partaking in the demonstrations were fascists and anti-Semites, as pro-government and Russian propaganda asserted. Among the revolutionaries was Natan Khazin, a young rabbi from Odessa who had moved to Israel, served in the Israel Defense Forces in Gaza and come back to Kiev.

“He came to realize this was his war,” Shore, associate professor of history at Yale, writes. “He broke the Sabbath for the first time in his adult life. He felt no ambivalence about this: he was protecting civilian lives.” Initially, Khazin said nothing of the fact that he was Jewish, but when he gradually began to tell his comrades, he was shocked by the reaction. “People called me ‘brother.’ Everyone.” Though there were Jews on both sides of the argument, for and against the pro-Russian Yanukovych government, among Lena and Leonid Finberg’s friends, “everyone they knew was on the side of the Maidan.”

Shore cites the Ukrainian historian Yaroslav Hrytsak in order to argue that although the history of Ukrainian-Jewish relations was a dark one—which may be understating things, considering the events of the Second World War—the 2014 revolution opened a new chapter. “The coming together of Ukrainians and Jews at a moment of revolution was a testimony to…the human capacity to begin anew.” With Jews in the thick of it alongside liberals and socialists, nationalists and lunatics, the Ukrainian Revolution was, as Hrytsak said, like Noah’s Ark: It took “two of every kind.” 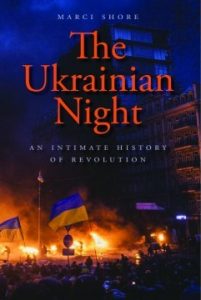 The Ukrainian Night is undoubtedly idealistic and very aware of the side of the argument it is taking, but it is nonetheless a highly accomplished piece of storytelling, drawing on elucidating interviews and conversations with participants that are then carefully woven into Shore’s narrative. Her account is so vivid that pages sometimes seem to quiver and ripple, as Shore describes the ways in which unsuspecting persons were thrown into sometimes thrilling, sometimes violent revolutionary situations. The Ukrainian Night is also a history of ideas that asks what exactly motivated those who took to the Maidan in the deep midwinter of 2013 and 2014.

Shore is drawn to tendencies that emphasize civic patriotism, democracy and pluralism. The image of historic Galicia—a region that today encompasses southeastern Poland and western Ukraine, which was part of the Austro-Hungarian Empire at one time—plays a prominent role in The Ukrainian Night. Jews constituted 11 percent of Galicia’s population in 1900 and the lure of this transnational terrain that was home to many languages and religions, before it was torn asunder and destroyed by Nazism and Communism, evidently captured Shore as much as it did at least some participants in the Maidan.

If Galicia was indeed the object of desire, then the Ukrainian Revolution was, like most revolutions, a revolution betrayed. Galicia is one place but the Donbass—Ukraine’s rugged, coal-rich far east—is quite another. Russia annexed Crimea before setting its sights on agitating and supporting separatist movements in eastern Ukraine. In March 2014, the Ukrainian Jewish community wrote an open letter to Russian President Vladimir Putin, stating, “Stability in our country has been threatened. And this threat is coming from the Russian government, namely—from you personally.” Putin had argued that Crimea is to Russians what the Temple Mount is for Jews and Muslims—something, that as Gary Shetyngart said at the time, “should offend Russians, Jews, and Muslims alike.”

“The majority of Ukrainian Jews share the desire to build a modern, democratic state,” Eduard Dolinsky, director of the Ukrainian Jewish Committee, wrote in The New York Times last year—and indeed, Jews have led civil society efforts to rebuild Ukraine in the revolution’s wake, as Shore documents. Yet many have had to choose another route. Ukraine has since the revolution become one of the largest sources of olim making aliya to Israel, the Jewish Agency having been involved in daring rescue operations for Jews from Donetsk and Mariupol in the rebel-controlled east in recent years. With the country severed by Russian interference and the work of reforming and cleaning up the government in Kiev having stalled, the outcome of the Ukrainian Revolution remains unclear for Jews and Ukrainians alike.

Should a jealous Jewish store owner keep tabs on his beautiful young wife, seemingly smitten with “a college man”?

END_OF_DOCUMENT_TOKEN_TO_BE_REPLACED

Photo Essay: Inside the Story of ‘The Zookeeper’s Wife’

In 2014, inspired by reading Ackerman’s book, Moment editor Nadine Epstein, visited the zoo as a guest of the foreign ministry of Poland.

END_OF_DOCUMENT_TOKEN_TO_BE_REPLACED

The New Sultan of Turkey

END_OF_DOCUMENT_TOKEN_TO_BE_REPLACED

One of the lesser-known heroes of World War II was Jan Karski (1914-2000), an officer in the Polish Underground resistance who infiltrated the Warsaw Ghetto twice… This past April, actor David Strathairn took on the role of Karski in a dramatic reading of Derek Goldman’s play, Remember This: Walking with Jan Karski, at Georgetown University in Washington, DC.

END_OF_DOCUMENT_TOKEN_TO_BE_REPLACED

Our Man in Warsaw: Konstanty Gebert

Born in 1953 when Poland was under communist rule,Konstanty Gebert viewed his Jewish lineage as a “biographical accident” until he was 15.

END_OF_DOCUMENT_TOKEN_TO_BE_REPLACED

Hungary at the Turning Point

It’s a few days before the May 25 European Parliament elections, and the streets of Budapest are awash with colorful campaign posters urging Hungarians to vote for delegates to represent their country in Brussels. It would be a shining display of democracy in action, a comforting reminder of Hungary’s ten-year membership in the European Union after decades of repressive communist rule, if not for the fact that…

END_OF_DOCUMENT_TOKEN_TO_BE_REPLACED

Creating art from the events of the Holocaust remains as daunting as ever. Soon, those awful events will move beyond the reach of living memory while the need for testimony grows more pressing, not less. But the responsibilities of art are different from those of history: Theodor Adorno’s much-misrepresented dictum that “it is barbaric to write poetry after Auschwitz” can simply be used as a lazy shorthand for refusing to engage with difficult and challenging creations.