Jewish Astrology, Then and Now

Astrology, according to a recent Atlantic article, is the ascribed “meaning to the placement of the sun, the moon, and the planets within 12 sections of the sky—the signs of the zodiac.” The sun sign is the most famous—it’s the one found in the back of countless newspapers and magazines, and is dependent on the placement of the sun on your birthday. However, the article goes on to explain that “the placement of the moon and each of the other planets at the time and location of your birth adds additional shades to the picture of you painted by your ‘birth chart.’” Although these descriptions might seem like new-age fakakta, astrology has a rich cultural history in Judaism.

In the book of Isaiah, the prophet announces, “Let them stand up and help you now, the scanners of heaven, the star-gazers, who announce, month by month, whatever will come upon you.” (47:13). A rabbi in the Talmud insisted in astrology’s validity, but argued that the Jewish people were exempt from its effects: “There is no mazal (planet and its influence) for Israel.” Elsewhere in the Talmud, it is proclaimed that “he who is born under Mars will be a shedder of blood.” Even the etymology of “mazel tov” is rooted in the idea of a constellation providing luck.

Despite these historical examples, modern rabbis differ on the permissibility of astrology as it relates to the Jewish doctrine. Some dismiss it as idol worship: “Since the days of Abraham, to be a Jew is to be an iconoclast. We challenge the idols of the age, whatever the idols, whatever the age. Sometimes it meant wrestling with idolatry, superstition, paganism, magic, astrology, primitive beliefs,” writes Rabbi Jonathan Sacks. Others view astrology as rational, but the practice itself as violating the trust in God to guide one’s future: “It seems that most of the authorities believe that astrology has some sort of power, but there is a fine line between believing in this and believing in power other than God, which is not the Jewish view. Thus, one cannot give credence to any power except God nor use astrology on a regular basis to guide one’s life,” says Rabbi Nachum Amsel. Despite these varying edicts, it’s clear that Jewish astrology has both a vivid history as well as a thriving present.

“There is astrology in Judaism,” says Lorelai Kude, the Jewish astrologer for The Jerusalem Post and head of the website Astrolojew. “There’s an entire history of it that is documented in text, art, artifacts, archaeological findings…everything along the way from antiquity until the eve of World War II proves that astrology was just a really normative component of Jewish life.”

Kude’s main tool as an astrologer is to implement the concept of the corresponding spatial arrangement between the 12 tribes of Israel with the 12 signs of the Zodiac—a connection that she says is codified in the Torah. “In Numbers, chapter two, it’s the entire description of the 12 tribes around the Mishkan, the tabernacle,” Kude explains. “And it describes the configuration of how the children of Israel encamped around the Mishcon 42 times over the 40 years that they wandered in the desert. And it’s always the exact same configuration…And it actually lines up exactly with the Zodiac,” Kude says. 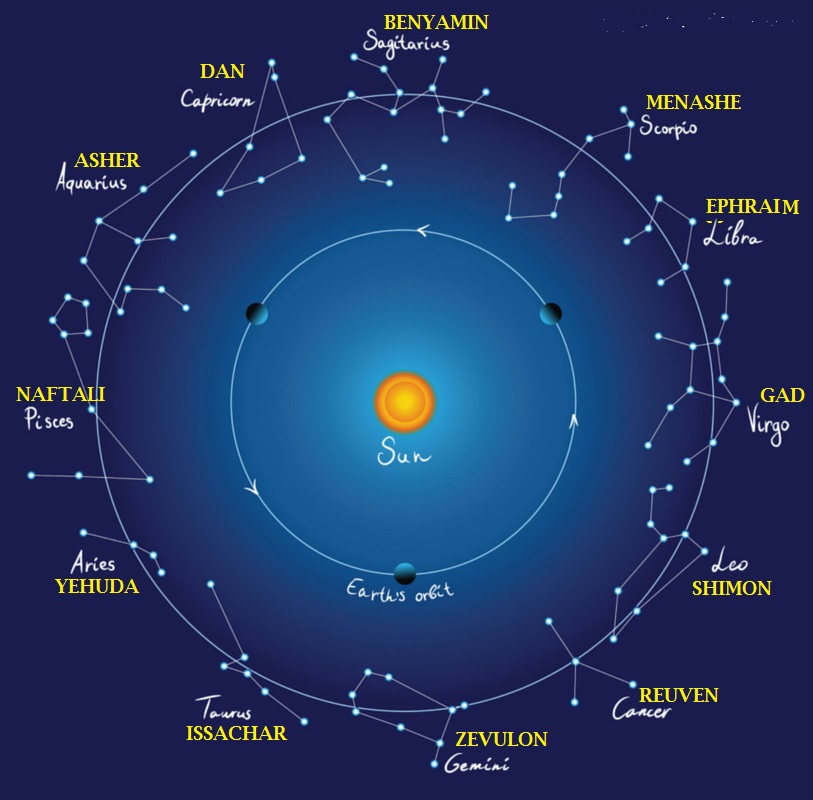 The correspondence between the Western Zodiac and the 12 tribes of Israel. (Courtesy of Lorelai Kude)

By bolstering her astrological readings with these Jewish paradigms, Kude says she was able to win over otherwise skeptical Orthodox Jews while she was in Israel. “The twelve tribes have their own archetypal stories and symbols that are overlaid on what we think of as the classical archetypes,” Kude says. For example, Kude argues that the sign of Aries is known for its leadership, bravery and protection of others, while the Tribe of Judah—which Kude says that Aries corresponds to—is also known for its initiative-taking and protective instinct. To name a few examples: Judah saves Joseph from murder when the other brothers band together to kill him; Judah promises Jacob to keep Benjamin out of harm’s way; Judah is even likened to “a lion’s whelp” by his father. These connections may seem like coincidences, but Kude believes they are much more.

Although astrology has always been scrutinized in Jewish dogma, Kude asserts that it didn’t truly begin to fall out of practice until after the Holocaust. She believes that this aversion was due to the widespread interruption of all normality—the everyday tradition of astrology was forgotten. Secondhand accounts of astrological practices failed to recapture its importance, and instead solidified its bad reputation. “Astrology got relegated to superstition, and it wasn’t thought of as rational,” Kude says.

Others argue that Jews’ transition away from astrology happened even earlier than the Holocaust. Rabbi Geoffery Dennis, author of The Encyclopedia of Jewish Myth, Magic and Mysticism, disagrees with Kude’s timeframe, but agrees that the reason behind the shift away from astrology was indeed a push toward rationality. “As we hit the modern era, our traditional practices and our folkways…were all held against us as signs of our backwardness,” Dennis says. “I think the Jews quickly made a decision that if we became the most enlightened people possible, many of these objections to us would be set aside.” Dennis argues that the Enlightenment period brought to Judaism an aversion to all practices that lacked concrete evidence. “The Haskalah—the Jewish Enlightenment—cast over all of these pre-modern traditions and practices and rituals,” he says. “And we embraced science.”

While Dennis says he doesn’t personally practice astrology, he doesn’t admonish Jews who choose to. “We’ve also come to realize that human beings are not simply the epitome of rationality. And our lives are richer when we embrace mysteries,” he says. “If a person comes to me and finds that their beliefs or their rituals help them, then I’m not going to automatically discourage them from that, because it works.”

Is it possible that Judaism and astrology aren’t direct adversaries? If they are, though, Kude insists that our ancestors were the real sacrilegious ones. “They’ve uncovered artifacts from the Dead Sea Scrolls, which [are from] the Second Temple period, that has horoscopes for regular Jewish people in it. And when I say horoscopes, it’s not when you look in the newspapers and you see horoscopes for sun signs. It’s somebody’s individual natal chart,” Kude says. She argues that these birth charts are representative of the larger culture of astrology. “There’s a component of astrology that is thought of as magical, and then there’s the component of astrology that is just normal, everyday living,” she says.

The real blasphemy only begins, Kude says, when people believe that practicing astrology replaces faith in God. On the contrary, she argues that astrology should strengthen one’s belief in God. “God created the system. God created time, planets and the constellations. The cycles of the planets and constellations are all in sync with the entire creation,” she says. Astrology is not, she asserts, “worshiping the creation instead of the Creator. That is what idolatry is.”

Even in the mainstream world of astrology, there are no shortage of Jewish practitioners. Jessica Lanyadoo, a San Francisco astrologer, psychic medium and host of Ghost of a Podcast, acknowledges the importance of her Jewish roots in her work. Her maternal grandparents are Holocaust survivors, and her father is a Jewish refugee from Iraq. “It’s not something that my family understood or still understands, but it was never a proper conflict, either,” she says of her astrological profession. Lanyadoo views astrology as a conduit for counseling—she helps clients by using their birth chart as a blueprint toward understanding their deep-seated issues and personalities. “It’s deeply important to me to support people with tools that are accessible to them and personalized to them,” she says. According to Lanyadoo, much of her work involves helping clients experiencing some level of trauma. “Being Jewish, and being, on both sides, refugees from traumatic situations, it’s given me quite a unique and adult experience, being able to step into trauma and pain and to be present for it,” she says.

Lanyadoo asserts that, like many Jews, she is inherently skeptical of astrology. “I don’t believe in astrology,” she says. “For me, none of this is about belief. It’s about evidence. Astrology works.” Because of this, Lanyadoo is able to take her naysayers with a grain of salt. “If somebody has the attitude that I cannot be somebody with integrity and be an astrologer, or be a Jew and be an astrologer, that is a reflection of them and their limited thinking, and their lack of willingness to actually understand or research or ask questions, but instead to rush to condemn,” she says.

Despite all the misconceptions, Judaism and astrology may be destined for reconciliation. Astrology is woven into the fabric of our religion and culture—from the Torah to the Talmud to today. While the existence of Jewish astrology remains indisputable, individual belief is not always in the stars. Lanyadoo takes a Jewish approach to this, too: “I am not evangelical in nature, I have no interest in trying to get people converted to astrology or anything like that,” she says. “To me, whether you’re looking at self-care, or you’re looking at spiritual connection to the divine, or sense of meaning in life, I really believe in using the tools that most effectively work for you—which is probably a pretty Jewish attitude.”

END_OF_DOCUMENT_TOKEN_TO_BE_REPLACED

6 thoughts on “Jewish Astrology, Then and Now”