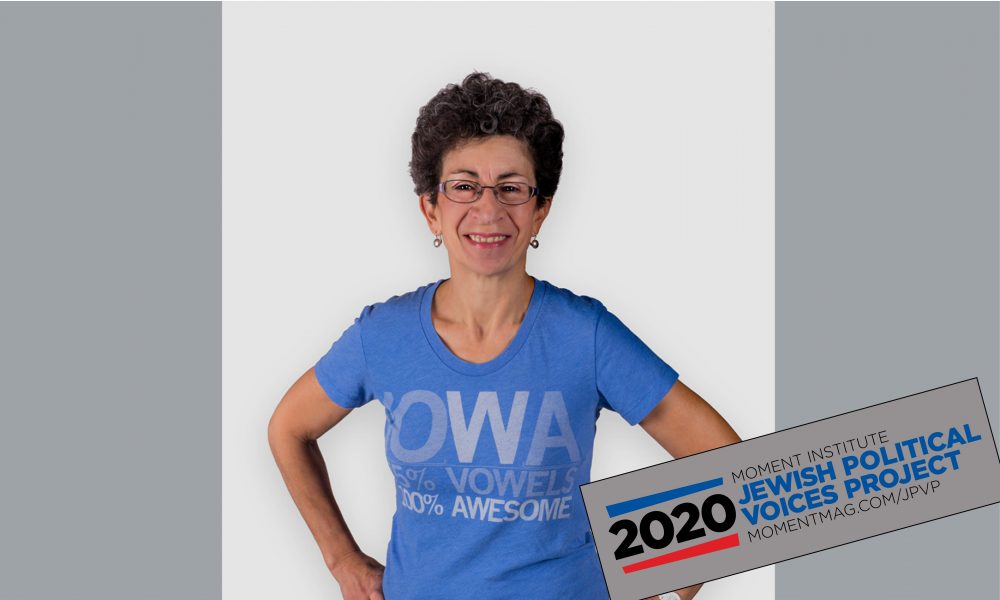 Janice Weiner (61), a Democrat from Iowa City, IA, is president-elect of her synagogue, Agudas Achim, and on its safety committee, an area where she gained expertise while in the Foreign Service. She is very active in the Democratic Party, serving as first vice-chair of the Johnson County Democrats (the “bluest county in Iowa”) and was recently elected to the city council in Iowa City. She also serves on the Iowa City Foreign Relations Council.

I dreaded a Trump presidency and knew it would be bad—it seemed redeemable until the combination of COVID and BLM, both of which lay bare his inadequacies, as well as his racism.

He has fulfilled his anti-immigrant promises to the extent he is able (not constrained by the courts or by the reality of what skilled and seasonal workers we need), as well as his taxation promises and the de-construction (destruction?) of government. He promised that “he alone” could fix things. His go-it-alone without proper staffing of ideas or proposals has proven destructive (see: Twitter and trade deals), and the pandemic has shown us that we actually need a functioning government. The only positive is that he has allowed us to see how much we had taken for granted in terms of norms and behavior—and how much we benefit from functioning government that is not staffed by people anathema to the goals of their respective agencies or perennially “acting.”

Biden has proven to be a different sort of candidate (though with a message similar to that with which he launched his campaign) than I had imagined. To be honest, I’m not sure what I expected – perhaps someone who seemed more of an old school candidate from the past. He seemed uncomfortable with the debates and perhaps out of his depth. But as time went on, he focused, earned the support of communities of color and flourished. That was when I started to see the Biden we now see: Steady, empathetic, willing to tack left and working hard to bring in voters who were not his natural constituency; taking firm and often progressive policy stances. As he won the primaries and became the presumptive nominee, and as the pandemic raged, he adapted, he focused on science and he began to message and act more presidential than the president. He has now shown me he is a leader who will bring in smart people—and who will listen to those with whom he may not be in complete agreement.

He needs to turn the economy around the win the battle against COVID. He needs to reach out to those who are not his natural base. He needs to stop trying to force kids into in-person schooling and he would benefit from adopting national strategies (sourcing testing, PPE, etc.). Of course, he has a chance —especially adding in rampant efforts at voter suppression (though even he had to change his tone on that in Florida recently when his “anti-vote by mail” rhetoric was not received positively). He will not stop trying to twist the truth and lie. And I don’t discount the possibility that he or his AG will pull out the stops with an “October surprise.” Never count out the incumbent, even this one.

Biden needs to continue to do what he has been doing—and he and his team need to be prepared to do an ad campaign that focuses not on Trump, but on the America that we live in now. It is hard for me to imagine most people (aside from the top 1%) believing that they are better off than they were four years ago. He needs to be prepared to counter everything the Trump campaign throws at him; he needs to not make unforced errors; he needs to have a really strong campaign operation across the country who focus on getting out the vote, including those who do not always vote. Yes, he has a chance.

What he should have done almost four years ago—stop the race-baiting, divisive language; actually work to unify. Stop vilifying, stop tweeting, start actually governing. Repeal his tax act. Honestly, I don’t believe he has the capacity to do it.

An endless “to do” list. Climate (Paris accord), good governance, an all-star cabinet, healthcare, ensuring we have what we need to combat the pandemic and then distribute a vaccine; work hard on racial equity; repairing relations with allies; righting our economic ship.

Absolutely not. It should be an option (done safely), but not required. Too many people, especially those who are most at risk from the pandemic (older Americans, Blacks, Hispanics) would be at risk and can safely vote by mail. We want high turnout—we want all to be able to exercise the franchise—not have to risk life and limb to vote. There are enough safeguards in place, and a number of states already do all their voting by mail.

200,000 will be dead by November; many more will be ill; we literally cannot fix our economy until we get a grip on the pandemic. One way or the other, virtually everyone is affected. Trump has cast aspersions on science, on the doctors who are the experts. His decision to make the states go it on their own and the “it is what it is” daily death toll, as well as the economy and jobs market in freefall—and his insistence on in-person school—will turn many against him. Regarding BLM–he now makes no secret of his racism. He is running on it. A majority of Americans support BLM. We have work to do—and he is unwilling to acknowledge it, let alone work on it. BLM has galvanized many young progressives and activists. They may not love Joe Biden, but they understand the danger to them of four more years of Donald Trump.

One example: Iowa Secretary of State Paul Pate sent ABRs (absentee ballot requests) to all registered voters in advance of our June primary. We had record turnout—a majority by mail, as well as many who took advantage of early voting and some who voted on the day of. Despite some efforts to prevent him from doing it again, Pate is again mailing ABRs to all registered voters and others are making major efforts to register university students. We will see record turnout where people have a chance to vote by mail. In other places—people will risk their lives to vote.

No. We will still have sufficient precinct voting locations open, and I believe a record number of Iowans will vote by mail, as occurred in the June primary.

I will vote by mail. It is easy, it is safe (I can also drop it in a dropbox at our county auditor’s office), and it will allow me to focus on helping get others out to vote.

Thanks to the non-leadership of Governor Kim Reynolds, Iowa has been a disaster. We are fortunate, I guess, that we don’t have major metropolitan areas. It is not under control. Reynolds told cities and counties we did not have the legal ability to put face-covering orders in place. We in Iowa City eventually did it anyway, followed by our county (Johnson). Given the lack of national and state leadership, it seemed the only reasonable way forward to protect our residents. Our school board has delayed the start of the school year to September 8 and is working on different models. I wrote a guest column for thegazette.com, our local regional paper, on the need for face-covering mandates. One key line: “Processed pork currently has more freedom of movement than we do.” The state of the pandemic across the U.S. is a reflection of the last of leadership at the national level—which, in some cases, trickled down to the state level. Our allies cannot believe what they are witnessing. The rejection of science, the failure to do real lockdowns, the rush to reopen—all flying in the face of science.

People care about their children. The push to reopen schools will prove the undoing of many, including our own governor. School districts, teachers, staff and parents will defy attempts (if they are at all financially able) until such time as we get the pandemic under control and schools are provided with sufficient resources to put in place the necessary precautions.

We have adjusted. Our High Holy Days services will be via Zoom. That does not mean we have accepted or become inured. My overriding take away: Extreme failure of leadership, aided and abetted by the Republicans in Congress—who have shown their true colors. Party over country, and who cares how many people die—they are mostly “expendable” anyway—Brown, Black, Indigenous, elderly. Any attempts for Republicans to break ranks now will be of no use. Iowa is now a battleground state—a state Trump won by nine points in 2016. Ernst’s senate seat is in play. Neither of those would have been thinkable even two years ago.