Moment will be following along the Israeli elections with a biweekly column on all the latest events. Missed our first installment? Click here to catch up.

Campaign season is officially in full swing. Most political parties launched their first media blitz this past week, giving Israeli voters the gist of their election strategy.

The Likud campaign, led by current prime minister Benjamin Netanyahu, will have a two-fold goal this time around—not just winning the elections, but also creating a distraction from the legal investigations against the prime minister.

It seems the campaign is aiming to hit these two birds with one very familiar stone: divisive rhetoric that will attack Netanyahu’s critics and fire up his base. This time, the first target is the press.

Early last week, a mysterious all-black billboard appeared along one of Israel’s busiest roads. The unmarked sign had black and white photos of some of Israel’s leading journalists: Maariv’s Ben Caspit, GLZ radio’s Razi Barkai, Channel 2’s Amnon Abramovich and investigative reporter Raviv Drucker. Underneath their image, in bold type, it reads: “they will not decide.” 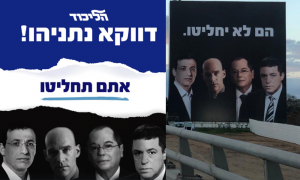 On Sunday, the Likud ended the rumors of who was responsible for the ad, supplementing the billboards with videos and social media posts that were branded as Likud and were shared by the prime minister on his Facebook page.

Meanwhile, Netanyahu’s lawyers are trying to persuade Israel’s Attorney General Avichai Mandelblit to postpone any decision on the investigations against the prime minister until after the elections. Whatever the attorney’s decision, expect Netanyahu and the Likud to ratchet up the rhetoric and name as many enemies as they can to ensure their staying in power.

So far, Israel Resilience and Gantz are focusing their efforts on presenting a middle-of-the-road alternative to Netanyahu, while maintaining an pro-military facade. Some on the left have criticized his campaign for championing bombings in Gaza during 2014’s Protective Edge (when Gantz was Chief of Staff), while critics from the right are saying Gantz was only carrying out the government’s policy.

A myriad of other parties are notable only for their scrambling so far:

The “New Right” party—formed by Naftali Bennett and Ayelet Shaked (former ministers of Education and Justice, respectively)—has been busy deflecting criticism against Shaked. She has been scrutinized by many after one of her allies in the justice system, top lawyer Effi Naveh, became the center of an outrageous sex-for-favors scandal. After a week spent sidestepping the affair, the party should come out swinging soon. Their former party, Habaiyt Hayehudi, is still dealing with the aftermath of their break up. Three weeks after the live-on-TV breakup in the top of the Labor, that party also continues to bogged down with intra-party politics. 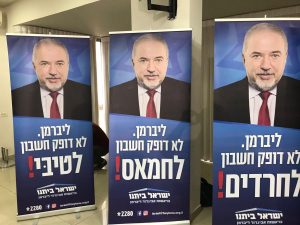 The Israeli-Arab parties and the Orthodox parties are still configuring their lists of candidates. A union between the three leading Orthodox parties is rumored—as Shas head Aryeh Deri is facing yet another corruption indictment—but unlikely. Avigdor Lieberman of the Yisrael Beiteinu party, who quit as minister of defense in November, launched his campaign by attacking the Orthodox, Israeli-Arabs, and Netanyahu, and is facing an uphill battle to remain in the Knesset.

So it seems that—despite his rivals’ efforts—the elections will once again revolve around Netanyahu.

After the Midterms: Now What? And What’s the State of Our Democracy? with Jennifer Rubin and Robert Siegel

What do the midterm election results mean and what should we expect over the next two years? A post-election conversation about the state of our democracy with Washington Post opinion columnist Jennifer Rubin and Robert Siegel, former NPR host of All Things Considered.

END_OF_DOCUMENT_TOKEN_TO_BE_REPLACED

Trump Is at It Again

What’s behind the timing of Trump’s latest rant about the American Jewish community?

END_OF_DOCUMENT_TOKEN_TO_BE_REPLACED

Jewish voters care about Israel, and they hold different views on Israel depending on their party affiliation. But they don’t vote based on these differences.

END_OF_DOCUMENT_TOKEN_TO_BE_REPLACED

Our Voters Voice Solid Support for Biden, but Disappointment that Race Is Now Between ‘Two Old White Guys’

With Super Tuesday behind us and the field now narrowed to former Vice President Joe Biden and Senator Bernie Sanders, we asked participants in the Jewish Political Voices Project who they now support for the Democratic nomination and their thoughts on the race thus far.

END_OF_DOCUMENT_TOKEN_TO_BE_REPLACED

Israelis went to the polls yet again on March 2, for the third time in less than a year. Here are four takeaways from this week’s election.