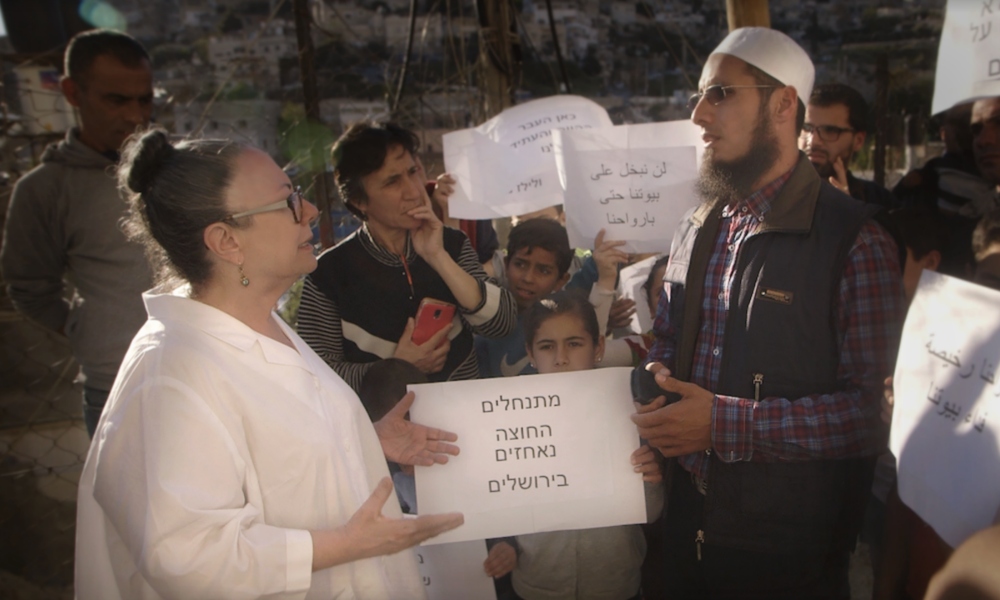 In our hyper-polarized age, when people can be convinced with absolute certainty that we are always right and those other guys are always wrong, simply trying to understand someone else’s point of view is a radical act. The remarkable new documentary Afterward, opening today in New York with more cities to follow, is just such an act: a dissection of nothing less than the last century’s collective trauma of the Jewish people, and a sincere attempt to find its echo in the trauma of Israel’s sworn enemies.

The director, Israeli-born psychoanalyst Ofra Bloch, grew up hearing stories of her family’s Holocaust survival and became fascinated by how cycles of anger and violence can perpetuate over time—what she calls “transgenerational trauma.” Now living in New York, Bloch wants to apply the lessons of her profession to her own people. So she embarks on a two-pronged mission. First, to visit Germany and interview descendants of Nazis about how they view the trauma their families caused. And second, to visit the Palestinian territories and interview activists, photographers and families of war victims about how they see the State of Israel, which was of course formed in response to the Holocaust. Through encountering these two communities she was raised to “fear and hate,” Bloch tries to find the emotional connections that bind them.

“How could I, a Jew who had so much to say about the past, have been silent all this time about the trauma of the present?” Bloch wonders. It’s a bold statement for a bold film. In the opening sequences, Bloch cuts from her uncle’s memories of the concentration camps to a Palestinian activist who states that the trauma of the Holocaust is used to “silence” her people whenever they protest their living conditions under occupation. Afterward dares to ask its audience to put preconceptions aside and think of suffering as just that—suffering. Not couched by declarations of who deserved what, it acknowledges that the feeling of suffering, absent any other political factors, is a universal one. A therapist’s responsibility is to the individual’s feelings, and the film asks us to see this endless conflict through that lens.

Suffice to say, many Jews who see Israel as a crucial part of their identity won’t like the message here. Bloch’s conversations broach taboo topics, like how the very notion, outlined in the Torah, that Jews are “the chosen people” might impact our ability to see the humanity in non-Jews. In a chat with a reformed neo-Nazi in Germany, Bloch confesses to feeling unease at sharing dialogue with a man who used to hate her people; later, after befriending a Palestinian man whose young daughter was killed by an Israel Defense Forces soldier, she wonders if he is experiencing that same feeling toward her.

Bloch supplements her interviews with disturbing news footage from the Israeli-Palestinian conflict over the last several years, including a 2016 clash in Hebron where an IDF soldier shoots and kills an unconscious Palestinian man in the head at point-blank range. The image is repulsive, and Bloch returns to it several times as she walks the streets of Hebron herself, trying to piece together her own feelings.

Lest you think Afterward is just a soapbox, Bloch finds the moments of common understanding that unite these populations. It’s clear she has her own political beliefs, but she’s a humanist at heart. As cheesy as it sounds, I was moved by a Palestinian’s memories of watching Schindler’s List; he expects to feel no sympathy for the Jews, but he comes to realize their need for justice and protection in a world that wants them dead was just as strong as his own. The film also features Mohammed Dajani Daoudi, a former PLO official turned university professor who took his Arab students on a trip to Auschwitz, where they were unsettled by the horrors of the camp; for leading this trip, many of Daoudi’s colleagues and countrymen saw him as a “traitor.” And self-reflection is hard for anyone, but when the Germans Bloch interviews struggle with their family legacies, it makes for an instructive and powerful declaration of purpose.

To be hurt, to have a devastation visited on your people, is an experience that immediately bonds you with all other communities that have been hurt. What we do with that feeling is our choice. Afterward asks big questions in a provocative way, and by taking these leaps, Bloch creates a roadmap for how Jews can avoid committing the same sins once visited upon us.