Without an option to vote absentee, some Israeli citizens won’t be able to participate in the upcoming election.
Israel, Jewish World, Latest, Politics

Louis Fishman, a professor at Brooklyn College, usually splits his time between New York City, Tel Aviv and Istanbul. Since the beginning of the pandemic, he has been mainly staying in the U.S. but did travel to Istanbul and Israel, where his daughter is currently in school.

When visiting Israel in August 2020, Fishman had to quarantine upon arrival. “I had to go to a two-week hotel, big corona motel, basically,” he says, although the quarantine restrictions weren’t top notch. “Everyone was leaving their rooms, and we were all hanging out and together,” said Fishman. When one of his fellow travelers tested positive for coronavirus, anyone that had been in contact with them got sentenced to another two weeks in the hotel.

Just a couple of months later, Israel closed the Ben Gurion Airport on January 25. Now in advance of upcoming elections, Haaretz reported that Israel plans to reopen Ben Gurion airport to allow all Israelis that are abroad that wish to return to do so. The Managing Director of the airport qualified the plan by explaining that the airport could only handle 4,000 passengers arriving per day while maintaining COVID restrictions, according to Haaretz.

Even though the airport is now up and running at a limited capacity, Israel’s lack of absentee voting poses an unprecedented consequence for Israeli citizens living outside the country during the pandemic, especially those that live in countries with their own travel restrictions: some Israeli citizens living abroad won’t be able to vote in the upcoming Israeli elections on March 23.

As a result of their inability to vote absentee, some Israeli citizens who reside outside the country have made a habit of flying back to vote in the elections, which have become more frequent in recent years. Whether it’s just for a day, or part of a longer trip, returning to Israel to vote has become a widespread phenomenon.

“‘We’re going back to vote,’” is a common refrain on flights going into Israel in advance of an election, said Fishman. “When you’re on the plane, right before elections, you meet other Israelis.”

Although El Al airlines has now resumed flights to Israel from the U.S. and U.K., Fishman, who has purchased a ticket for an El Al flight and will arrive in Israel in advance of the elections, noted that flights are much more expensive than usual.

“I would’ve flown in to vote in the airport and flown out,” said Raphael Levy, an Israeli citizen living in Hertfordshire, in the U.K. While Levy’s desired plan might be in the works in Israel, U.K. restrictions bar Levy from leaving the country without a “reasonable excuse.” The U.K. government’s list of reasonable excuses doesn’t explicitly include voting in the election of another country.

“I could try and get on a flight, they are running, but I would be breaking the law the moment I left my house,” said Levy.

Levy’s sister, Danielle, who is also from Hertfordshire, says factors beyond the U.K.’s travel restrictions are a hindrance as well. “Because I haven’t had my vaccine, it complicates things,” said Danielle, 25, who had also heard that the internet in Israel’s COVID hotels was dysfunctional, making it impossible for one to work remotely. Thus, taking time off work would be an obstacle if she were to travel to Israel and be required to isolate herself. 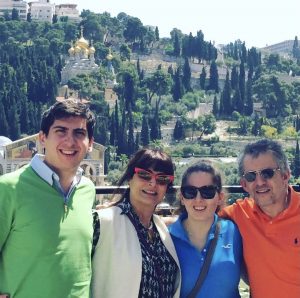 Raphael Levy, first from left, and his sister, Danielle, third from left, in Israel in 2015, the first year they both voted. Photo courtesy of Raphael Levy.

Fishman corroborated what Danielle had heard. When he stayed in a COVID quarantine hotel for two weeks in August, he shared that many of his fellow travelers had inadequate internet, and as a result, worked in a common space in a hotel in order to have wi-fi—thus no longer being able to isolate as the hotel intends.

Although Fishman is planning on returning to Israel to vote, he isn’t certain he’ll be able to make it to the ballot box on March 23rd. “We get a PCR test at the airport, then we get something called a serology test two days after we get there,” said Fishman. A serology test is a test that determines whether or not someone has COVID antibodies.

According to Israel’s National Emergency Portal, “those in quarantine will exercise their right to vote at special polling stations,” which will be placed either near the aforementioned hotels or the private residences in which citizens will be isolating.

However, Fishman isn’t so sure that the process will work as smoothly as described. “I would have to be there two days in isolation,” said Fishman. “Will I be able to vote or not?”

Speaking about Israel’s seemingly constant elections, journalist Nathan Guttman said that the upcoming election is just as important as its predecessors. “According to the polls, it’s gonna be really tight. So if you’re really invested in it,” said Guttman “you would like to make an effort to come.” Guttman is based in Washington DC and hasn’t voted in an Israeli election since 2000.

Case in point, both Danielle and Raphael Levy are frustrated and sad that they won’t be able to return to Israel to vote. Both of the siblings have been Israeli citizens since birth and have voted in most of the country’s elections since 2015, when they became of age to vote, by flying from the U.K. to Israel either for a day or for a longer trip to visit family.

“I like feeling like I contributed and had my say,” said Raphael, who plans to move back to Israel in the future. Why Israel hasn’t figured out a universal way to allow its citizens living abroad during a “COVID election” to vote isn’t clear to Levy. “It’s a shame.”

Danielle explained her confusion as to why Israeli citizens voting abroad aren’t able to vote at the Israeli embassies in other countries like Israeli diplomats are able to do. “It just doesn’t seem right that it’s not being made possible,” said Danielle.

Fishman sees a correlation between the uncertainty surrounding whether or not Israeli citizens will logistically be able to vote in the election and Israel’s unstable government. “How else can you explain it except you’ve had four elections in two years?”

“Every vote counts,” said Danielle. “And to not be able to make that difference, it’s just taking away my freedom.”

END_OF_DOCUMENT_TOKEN_TO_BE_REPLACED

Jews in the Middle: Who Are the Jewish Independent Voters?

END_OF_DOCUMENT_TOKEN_TO_BE_REPLACED

For Donald Trump, the road to reelection—his only viable path, experts say—runs through Florida, with its crucial 29 electoral votes. That’s why, between Labor Day and Election Day, the Republican campaign plans to spend $32 million of the $95 million TV campaign budget in Florida. As the GOP ad buy acknowledges, without the Sunshine State, Trump is a one-term president.

END_OF_DOCUMENT_TOKEN_TO_BE_REPLACED

Will Israel Finally Have a Government?

Israel is now about to have a government for the first time in almost a year and a half. How did it get here?

END_OF_DOCUMENT_TOKEN_TO_BE_REPLACED

Facebook Twitter Pinterest linkedin Telegram
What happened today? For the first time in Israel’s history, a sitting prime minister has been indicted on criminal charges. The mos...

END_OF_DOCUMENT_TOKEN_TO_BE_REPLACED

Facebook Twitter Pinterest linkedin Telegram
As the Hebrew year 5773 comes to a close, I want to explore the background of the most dramatic event in the Jewish world in the past 1...

END_OF_DOCUMENT_TOKEN_TO_BE_REPLACED

Israeli Elections Today–Who Would You Vote For?