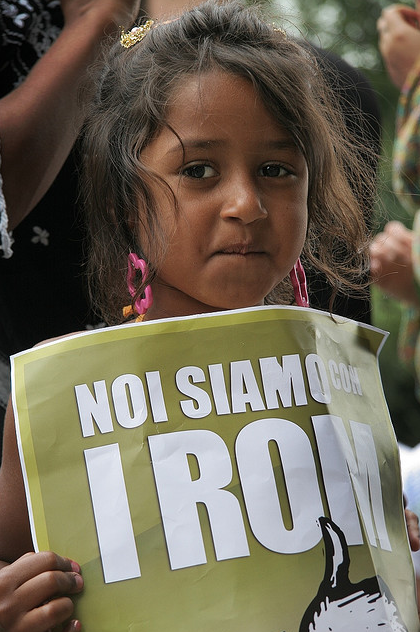 That evening, I arrive back in Bucharest and meet with Nicu Fortuna, a sociologist and Roma activist in his early thirties who has collected the stories of Roma deportees during World War II with the eye of a philatelist. “During the war the Roma were taken and put down like wild dogs,” he says.

“There is a difference between the Jewish and Roma deportees,” he adds. “The Jews were shocked and can remember the year, date and time it happened. The Roma shrugged it off. They said, ‘Of course I was deported. I’m Roma; these things happen to a Roma.’ The Roma mentality is different from the Jewish mentality. For example, a Roma came to me and asked, ‘Why do you care so much about these deportations? Your family was not deported.’ I went, ‘I care as a Roma’ and the guy said back, ‘I do not care because my family were brave, proud Roma that were not deported.’”

This highlights a difference between the Roma and the Jews during the Holocaust. “For the Jews it was total and everyone knew this—from bankers to pawnbrokers. For the Roma it was selective and not comprehensive. The Roma were only exterminated in a few parts of Europe such as Poland, the Netherlands, Germany and France. In Romania and much of the Balkans, only nomadic Roma and social outcast Roma were deported. This matters and has an impact on the Roma mentality,” Fortuna says.

Nevertheless, he tells me that he wishes that Jews would show “the Roma Holocaust a little more respect and acknowledgement.”

I ask him to take me to meet a survivor. It is late and he has a young child, but he agrees and we drive 30 minutes to meet one. When we arrive, the survivor is standing in a slovenly apartment that smells like a mix of unwashed feet and polenta. He is waving a wad of wrapped notes that are his savings. His face is gullied as if shaped by the tide.

“I want to be paid for my punishment,” he says theatrically, raising his hand like a circus conductor. “I suffered there for four years,” he says. “You must pay me for the interview as a recompense for what I suffered. You will take the interview abroad and make money.” The door slams.

Fortuna feels humiliated as the elevator creaks to the ground floor. “I feel so, so shamed when they do this,” he says. “So shamed. They always ask for money. They are living in the moment you see. They even ask me for money. They don’t understand why this is important.”

It is night now and Fortuna is making imploring calls. “We can go but for 10 euro…and a bottle of Fanta.”

The backstreets of Bucharest belong to the Roma. We turn off the car engine in a dingy alley and walk past a pile of oil cans into a Dickensian slum tenement. The survivor is sitting there cross-legged on a yellowing mattress watching Indian dancing on television.

“I like the Indian dancers,” she mutters. She is 77 years-old.

“I was deported when I was around ten,” she says. “The police came to our house.” She digs her thumb into a pillowcase. The dancing Indians are on mute.

“We were then taken on a train north that went to Russia. There were many gypsies there…crowding…people falling, wetting themselves. When we got to a camp there were Germans there and Ukrainians running it. There were so many people cramped into the space. We were given only rotten milk and stale bread and made to live in barns. Anyone who didn’t work was beaten. People were dropping, dying.”

Some 11,000 of the 25,000 deportees from Romania died in the camps where she was taken, in what is today Ukraine. “My parents were terrified and I saw people having their heads chopped off.”

“Do you talk about this often?”

“No, only when asked.” I pass her the money. The drive back to Fortuna’s Soviet-era apartment block is long because of traffic. “There is no national consciousness and no historical memory of the Holocaust because there is no Roma elite,” Nicu says. Nor are there books, or a homeland.

I ask if the Roma have anything at all to remember what happened. “Yes, the song Gelem Gelem,” he says. “It is a song selected in 1971 to be the anthem of the Roma. It is about what happened.” Gelem Gelem was sung by the gypsies of Auschwitz, whispers Nicu. The song originates in what the Roma call the Porajmos, or “devouring”—their word for the Shoah. Written by Žarko Jovanovic, the song was adopted by delegates of the first World Romani Congress in 1971.

That night, I listened over and over to the song. The melody is instantly recognizable as Roma and it soars in anguish.

I went, I went on long roads
I met happy Roma
O Roma where do you come from,
With tents on happy roads?
O Roma, O brothers
I once had a great family,
The Black Legions murdered them
Come with me Roma from all the world
For the Roma roads have opened
Now is the time, rise up Roma now,
We will rise high if we act
O Roma, O brothers

Europe continues to march into the future, but the Roma road seems to be veering in its own direction, neither forward nor back. I recall the words of an old Roma judge beneath his conical astrakhan cap, who wanders Romania’s Roma communities dispensing traditional Roma law as he knows it. “We came from India and we wandered until here,” he told me wistfully. “It would be good to go back…but we have forgotten the way home, we have forgotten where that was.”