‘Incitement” Takes Us into the Mind of Rabin’s Assassin

Yaron Zilberman’s film Incitement begins with a scene of then U.S. President Bill Clinton on the White House lawn with Israel’s Yitzhak Rabin and Yasser Arafat of the PLO. It was a historic moment when peace between Israelis and Palestinians appeared possible and hope was palpable. But history, as the great Irish novelist James Joyce so aptly put it, is a nightmare from which we are all trying to escape.

The nightmare, in this case, was the assassination of Rabin and all that followed and continues to the present day. Perhaps peace between Israelis and Palestinians might not have lasted even if Rabin had lived. We will never know. But the nightmare that continues stems in large part from the forces that led to the Israeli prime minister’s murder.

The murder was carried out by one young man, Yigal Amir, a 25-year-old Bar-Ilan University law student, an Orthodox Yemenite Jew who is serving a life sentence for killing Rabin.

Incitement takes us into that young man’s mind. It is not a mind we are intended to sympathize with, despite Amir’s being portrayed to us in a number of favorable lights: He loves his mother, is amicable and popular, especially with friends who think highly of him; some served with him in the military, including one who compares his military zeal and abilities to Rambo. But he is a fanatic. No other word will serve. A fanatic, who tells the girl he wants to marry that he possesses a mind like a laser that cannot be held back once a target is decided on.

Zilberman is not looking for us to sympathize with Amir even though we see virtually everything from his fanatical point of view. The filmmaker went to major lengths to use what he called distancing devices—shots at odd angles and no melody—to keep the audience from identifying with the murderer. But what we do see is why Amir is consumed with hatred for Rabin and why he believes he must be the laser to target and ultimately destroy the peacemaker prime minister.

It is a cautionary, revelatory tale. And one, sadly, for the quarter century since then and right to the present. Are religious zealot Jews and secular Jews any less polarized about this aspect of the future of Israel now than in the film? Have attempts to achieve peace, including the controversial agreement recently put forward by the Trump administration, moved us anywhere back to where we were in that moment of optimism for peace and the Oslo accords we witnessed in the ritual on the White House lawn, which concluded with Rabin and Arafat shaking hands?

Yehuda Nahari Halevi, also a Yemenite Jew, brilliantly portrays Amir as we watch his fanaticism take root and escalate—from protests in which he yells “Death to Arabs” to later protests where he and others are yelling “Death to Rabin.” From his driving at a mad clip to make it to the funeral of Baruch Goldstein, the American-born Jewish killer of 29 Palestinian worshippers in Hebron, to his driving on a mission with others he recruited to see if he can poison the pipes in Rabin’s apartment building to kill the prime minister.

What drives Amir? That question anchors and compels the action in this thriller whose violent conclusion of murder is inescapable. And Zilbermam, whose script (cowritten with Ron Leshem) includes extensive and detailed research by Yahir Hizmi on Amir’s personal life, dramatizes all which incites Amir. Starting with the mother who gives him a name which translates from the Hebrew to mean, “He shall bring total redemption,” and who reassures him over and over that he is destined for greatness—virtually a messianic figure. Add a weak though loving Torah scribe father and Amir’s Mizrachi outsider’s identity to an ill-fated love for Nava, a girl from an Ashkenazi settler family who marries one of Amir’s friends, and you begin to get a portrait of what helped shape him. But these are circumstances that could apply to thousands of young Israeli men. What sets Amir apart is his fervor, his extremism, his polarized nationalism. What manages ultimately to incite him to murderous rage, as the film dramatizes, are the religious rabbis who validate his Talmudic questions concerning the right of the pursuer and the informer when it comes to killing for Zion and God’s will. Rabin is seen as a traitor by Amir and his fellow zealots, as even a Nazi. Palestinian prisoners released under the Oslo Accord kill Jews. Bombs are set off in Tel Aviv killing Jews. If one’s people are killed by one’s enemies and the enemies are aided by a Jewish leader, does that Jewish leader deserve to be killed? Amir craves religious clearance to take Rabin’s life via rabbinic concordance, and the rabbis he consults appear to give him the answer he wants. The film is on the side of those who, like Rabin, were in favor of peace, the mass pro-peace demonstrators we see in the film’s final scene, in which Amir kills Rabin. The religious zealots are made to appear complicit, as well as the Likudniks and Bibi Netanyahu, who ineluctably take on power.

The film goes right to the viewer’s heart like a laser. 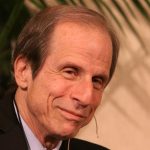 Michael Krasny is the host of Forum on the San Francisco public radio station KQED.