From the bimah of Congregation Kol Tikvah in Parkland, Florida, Hannah Santo addressed friends and family gathered to celebrate her bat mitzvah. “You see me standing alone,” she said. “But in reality, I am not alone.” Joining her in spirit, she said, were three Jewish girls from the Netherlands—one also named Hannah. They all perished in the Holocaust before reaching the age of bat mitzvah or confirmation.

Santo is now 27, but the memory of that moment is still meaningful to her and those who witnessed it. Among those in the audience that day in 2008 was Santo’s grandmother, Louise Lawrence-Israels, herself a Holocaust survivor. “I was so moved,” says Lawrence-Israels, who recalls tears flowing from her eyes. “It wasn’t in the program. She just came out and said it.”

As Jews around the world observe Yom Hashoah, which starts on Wednesday evening, such pairing programs—and their impact on Jewish youth—come into sharp focus. They are often an awakening for Jewish teens, particularly for those from comfortable homes who have never known prejudice or deprivation.

Many see pairing (sometimes referred to as “twinning”) as part of a larger commitment to being an “upstander” on issues of social justice. Some might even be inspired to make a life’s work out of this commitment by becoming a rabbi or Holocaust educator. But for most, the experience simply undergirds a lasting sense of Jewish identity that gets carried forward into day-to-day life. “It was a rite of passage to becoming a Jewish woman,” Santo says. “For me, being a voice for those who never had a voice was such an important part of Jewish adolescence.”

Programs similar to Remember a Child abound at the local, national and international level. Perhaps the most prominent is the Twinning Program at Yad Vashem, Israel’s main organ for Holocaust remembrance. Yad Vashem draws on its extensive archive of Holocaust victims, offering participants a kit that includes testimony about the victim and their family members, a study guide and certificate, and a personal letter from a Holocaust survivor. A more recent “upgraded” version of the program adds a Zoom ceremony, which is led by a Yad Vashem representative and incorporates family participation. The ceremony is recorded for the family as a keepsake.

Remember a Child, now part of the Holocaust remembrance group The Generations After, is a bit more homespun. The program’s leadership is always looking for ways to bridge the bar/bat mitzvah child’s family life to that of the paired victim. (Remember a Child eschews the phrase “twinning.” As Lawrence-Israels put it, “You don’t twin with a dead person.”)

The survivors who started the program in the 1980s eventually ceded leadership to a younger generation, most of whom are children of survivors. Lawrence-Israels is one of the dwindling number of survivors who remain active in the program. Born in Amsterdam in 1942, she spent the first three years of her life with her parents hiding from Nazi occupiers. She had little concept of life out in the open. “I thought everyone lived in an attic!” she says. She was a few months shy of three when Canadian soldiers liberated Amsterdam. 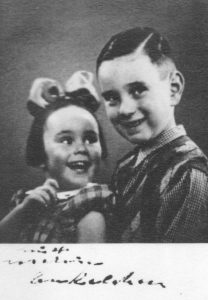 In 2015, Barbara Brandys assumed leadership of Remember a Child. Brandys was born in in Warsaw in 1950 to two Holocaust survivors who elected, as committed Communists, to stay in Iron Curtain-era Poland. But the Six-Day War of 1967 ushered in a new chapter of antisemitism in Russia and its Eastern bloc allies, and the Brandys family fled Poland for Israel. Barbara was 18. “I try to match each child in the most meaningful way possible,” she says, in the hope that the children and their families “will carry on the memory of the murdered child, not only at the ceremony but throughout their lives.”

The matching process is more of an art than a science. In 2017, the family of Ariella Livstone of East Windsor, New Jersey approached Brandys about a pairing for Livstone’s bat mitzvah. They requested a victim from the town of Schedrin in Poland, from which family ancestors emigrated to America. When no such match could be found, Brandys suggested an alternative: Lucie Nicole Lipstein, deported to a concentration camp from Antwerp, Belgium. “Lipstein” was not that far off from “Livstone.” And the name came with a photo and a contact: a cousin who lived in New Mexico. The cousin, Ed Leighton, was flattered that Livstone expressed interest in Lucie as her match. He sent her a silver locket with the Star of David to wear at her bat mitzvah.

“The Holocaust is usually reduced to a number, 6 million Jews who all tragically lost their lives,” says Livstone, who is now 17. “Most people don’t think about much more than that. For me, it was much more than a number. It was having a name and a face and a story.”