An occasional series where we celebrate Jew-ish TV characters of the past
Arts & Culture, Latest

During this protracted pandemic, many people are watching reruns of their favorite shows such as Matlock, Maude and Perry Mason. Having served six years in the Army Reserve during the Vietnam era, I gravitate toward M.A.S.H., which has impressive character and plot development, despite the fact that only four of the eleven main actors (Loretta Swit, Alan Alda, Jamie Farr and William Christopher) survived the series from beginning to end (1972-1985). Among them, Alan Alda, in the role of the talented surgeon Captain Benjamin Franklin “Hawkeye” Pierce, stands out as the central figure.

Pierce has some iconic defining traits, which both attract and repel the viewer. First of all, he is a womanizer, or skirt-chaser (the Russian term is babnik), whose goal is to fall into bed with every one of the nurses on the M.A.S.H. staff. Second, he is an iconoclastic, cynical jokester who especially enjoys tormenting two other doctors—Majors Frank Burns and Charles Emerson Winchester III—because the first is a self-absorbed, phony patriot, while the second is a pompous, arrogant snob. 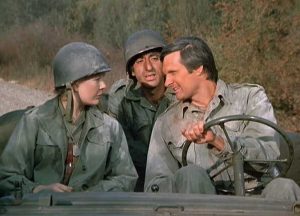 But Pierce also serves as the show’s gateway into Jewish culture. Benjamin Franklin “Hawkeye” Pierce is supposed to come from the fictitious Crabapple Cove in Maine, and, though not a member of the tribe himself, Alda’s origins in the Bronx shine through his portrayal of Pierce in nearly every episode. He weaves Yiddish-isms and Jewish references into some of his best lines, making Pierce the most “Jew-ish” member of M.A.S.H #4077.

In addition, his 60-year-plus marriage to Arlene Weiss Alda, who is Jewish herself, and her profound influence on him, has made him an honorary Jew, even though he was raised as a Roman Catholic. Nowadays as an octogenarian, Alda identifies as agnostic, though he admits praying to God when he is fearful.

Because of this Jewish connection and the preponderance of Jewish writers on the show (e.g., Allen Katz, Ken Levine, Jay Folb, Larry Gelbart, Everett Greenbaum, John Rappaport, et al), Alda as Pierce is given virtually all the Jewish lines. Pierce seems to be fixated on the Yiddish word for rear end (tuchus), which he uses frequently, even in his professional discussions of anatomy. For example, when he and “Hot Lips” Major Margaret Houlihan are obliged to give each other an inoculation, his flirtatious nature is titillated by the fantasy that they will poke each other in the tuchus and not the arm.

Pierce’s Jewish influences go beyond the occasional innuendo. He hyperbolically complains that his Army-issue mattress is “the size of a matzah,” and loves words derived from Yiddish, such as “nebbish” and “nudge,” using them on many occasions.

Pierce is even impressed by the mock-Yiddish term Ish-Kabible, which while referring to a comedian of the era, also sort of means “I should worry.” He uses it twice throughout the series, once in asking his drinking buddy Trapper John whether they should drink to MacArthur or Ish-Kabible, and then in good humor introducing “Ish-Kabibble and His All-Girl Orchestra.”

Finally, in one of the show’s episodes, which is constructed around a crossword puzzle, Pierce pesters everyone to learn the Yiddish word for “bedbug.” He goes so far as to bother higher-ranking Jewish officers with this query, bringing them to M.A.S.H. #4077 in the hope that they might provide the correct answer.

In addition to Yiddish words, Pierce is also smitten with Jewish culture, even though the idea seems far removed from the Korean War of the early l950s. When a Jewish soldier comes to the 4077th with a critical wound and thinks he might die, he requests a Rabbi’s visit. Pierce responds that the only clergy they have is the Catholic Father Francis Mulcahy, “but he loves Al Jolson.” In another episode, after hitting his head and suffering a light concussion, Pierce daydreams about eating whitefish at a Jewish Deli in New Jersey—far away, both geographically and culturally, from Crabapple Cove. Lastly, as Hawkeye examines a wounded soldier’s heart and finds it beating normally, he says that now all this patient needs is a bass and a clarinet, and he can play at the Ginzburg family Bar Mitzvah!

Oh, by the way, the five-letter Yiddish word for “bedbug” is vantz.

END_OF_DOCUMENT_TOKEN_TO_BE_REPLACED

What we’re laughing at this week.

END_OF_DOCUMENT_TOKEN_TO_BE_REPLACED

Moment Zoominar: A Jewish Vietnam Veteran Looks Back 50 years on the Moral Journey that Changed His Life with George Johnson

From 1968 to 1969, Moment Senior Editor George Johnson served as an Army intelligence advisor in the CIA’s Phoenix Program in South Vietnam.  Based on his memoir When One’s Duty and the Right Thing are not the Same, Johnson discusses his assignment to this once-secret intelligence program and the Army’s program for “pacification” of Vietnamese villages. He also discusses how his reservations about the war caused him, upon return from Vietnam and to civilian life, to call for an accounting for the war and to re-orient his life toward Judaism and Jewish social action. This program is in honor of National Vietnam War Veterans Day.

END_OF_DOCUMENT_TOKEN_TO_BE_REPLACED

2 thoughts on “Hawkeye Pierce: An Appreciation”