Hate Speech in the Netherlands 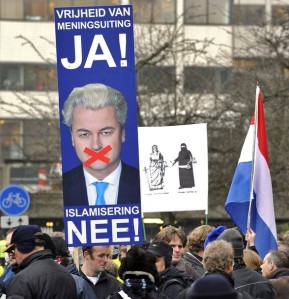 Last week, popular far-right Dutch politician Geert Wilders was acquitted of all charges of inciting hatred against Muslims.  The allegations made against him were based on his provocative statements that likened the Koran to Mein Kampf and called Islam a fascist religion.  The judges, after just 20 minutes of deliberation, threw out the case.  According to the BBC, “although the [judges] found [Wilders’] warning of a ‘tsunami’ of immigrants to be on the border of what is permissible, they said he had stayed within the bounds of the law.  [The] judges called some of Mr. Wilders’ comments ‘crude and denigrating,’ but not illegal.”  Buoyed by his success, Wilders gave a victory speech following the verdict in which he did nothing to tamp down the controversy surrounding him.  Instead, he declared that his win was a slap in the face to the Islamiziation of Europe.

Wilders is infamous in the Netherlands for fanning the flames of anti-Muslim sentiment.  He has written inflammatory pieces in the Dutch media about Muslims and other non-Western immigrants and in 2008, made a film, Fitna, that depicted Islam as inherently violent.  His involvement in anti-Muslim speech does not stop at the Dutch borders.  Last year, he brought his act to the United States.  During the debate over Park51, the proposed mosque near Ground Zero, he joined Newt Gingrich at a rally to oppose the building of the mosque.

It is deeply disheartening that in the Netherlands, where it is illegal to deny the Holocaust and where there are strict laws on hate speech, language clearly used to denigrate the Muslim minority population was deemed permissible. During the Second Intifada in Israel, a French journalist commented that his country’s government only recognizes anti-Semitism if it’s goose-stepping down the Champs Elyseé in jackboots.  It appears that the Dutch courts are similarly limited in their perceptions of hate speech.

Given its history and the laws in other EU countries, it is understandable why Holocaust denial, and by extension attacks on Dutch Jews, is considered a crime in the Netherlands.  However, protection from vile and ignorant language in the public sphere should not only apply to those in the Jewish community.  Other minority groups, too, should be able expect legal protection from hate speech.  While the Holocaust is an extreme example, it is worth remembering that the deep-seated hatred and rage that helped fuel it was not created in a vacuum.  It was in part the product of centuries of accepted discrimination and hate speech left unchecked.  Based on the right-wing response to the ruling, there is now a sense that a taboo has been lifted and the boundaries of acceptable rhetoric have widened.  The hate-filled rhetoric aimed at Muslims and other non-Western minorities is spewed by those who now, more than ever, feel a freedom to feed the existing atmosphere of anger and suspicion in the Netherlands.  As John Tyler, political editor at Radio Netherlands told the BBC, “This is a precedent-setting case that now allows people to feel like they can say more than they felt they could say before.”

According to the State Department website, in December 2009, Dutch politician and former EU commissioner Frits Bolkstein suggested that Dutch Jews should emigrate because of rising incidences of anti-Semitism, a statement that he later denied amid criticism.  If Wilders and his supporters continue their rhetoric against Muslims and other non-Western immigrants living in the Netherlands, perhaps other Dutch politicians will suggest that Muslims, too, should leave the country.  If they do, will anybody care?

END_OF_DOCUMENT_TOKEN_TO_BE_REPLACED

4 thoughts on “Hate Speech in the Netherlands”